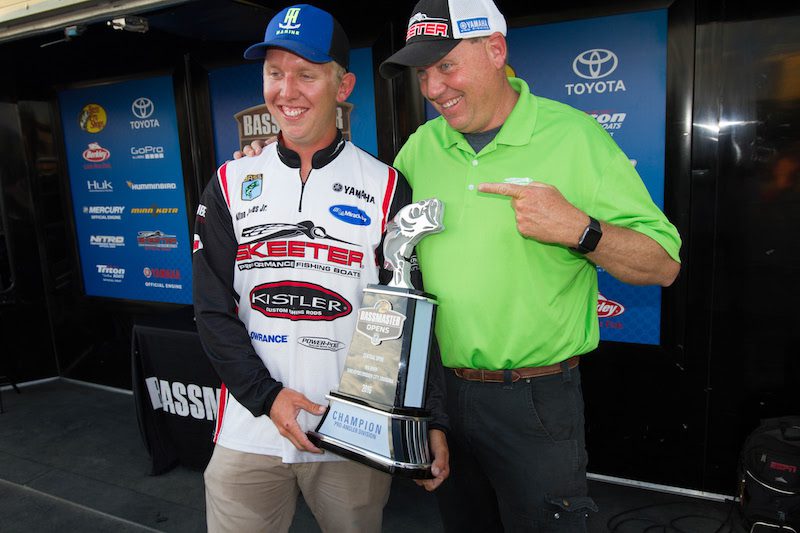 When Alton Jones Jr. won the Central Open on the Red River back in late September, his father, veteran B.A.S.S. angler Alton Jones, said he was more nervous than his son. Now the two will fish against one another in the upcoming GEICO Bassmaster Classic presented by DICK’S Sporting Goods on Lake Conroe, an hour outside of Houston, March 24-26.
Photo by James Overstreet/Bassmaster

HOUSTON — When an angler grabs the lead toward the end of the final day of the GEICO Bassmaster Classic presented by DICK’S Sporting Goods, he’ll take a rest in a special chair known as the “hot seat” until someone bumps him from the top.

Former Bassmaster Classic champion Alton Jones and his son, 24-year-old Bassmaster Elite Series rookie Alton Jones Jr., were asked separately this week to envision a situation with one of them in that hot seat and only the other left to weigh in with the Classic trophy on the line.

Would that scenario be a nightmare or a dream?

Without blinking — as if they’d rehearsed it somewhere privately together — they both said, “A dream!”

The Joneses will have a chance to carve those kinds of special moments into history when the 47th renewal of Classic — the undisputed world championship of professional bass fishing — takes place March 24-26 on Lake Conroe with daily weigh-ins at Houston’s Minute Maid Park.

They will become only the fourth father/son duo to compete in the event, joining Bill and Greg Ward, Guido and Dion Hibdon, and Denny and Chad Brauer.

“The only word I can use to describe the situation is ‘blessed,’” said the elder Jones, who won a Classic title in 2008 on South Carolina’s Lake Hartwell. “Back when I won, at that moment, the idea that he and I would someday fish a Classic together was just a dream.

“It wasn’t really until he started fishing the Opens that it truly hit me I might be fishing against my son someday.”

Jones Jr., who made the victory lap as a 15-year-old in his father’s boat after that Classic win in 2008, fished the Bass Pro Shops Bassmaster Opens last year like a young man who had been groomed his entire life for high-pressure moments.

After suffering a crushing letdown when he missed qualifying for the Elite Series by a single point through the Northern Opens, Jones Jr. rebounded with an incredible two-tournament finale on the Central Opens circuit.

He scored his first career victory with B.A.S.S. in the Central Open held on the Red River in Louisiana in late September. That victory earned him his berth into the Classic — and then with a 35th-place finish in the final Central Open on the Atchafalaya Basin in October, he finished high enough in the season points standings to earn an invitation to the Bassmaster Elite Series. He accepted the invitation and is competing on the prestigious pro fishing tour this season, beginning today.

Jones Jr. worked together with his father during pre-practice for the Classic on Lake Conroe and then again this week for the Elite Series regular-season opener on Tennessee’s Cherokee Lake. That interaction has made this dream situation seem all the more real.

“I think it finally hit home with me that I’m fishing the Classic against my dad when Lake Conroe went off limits (Jan. 15),” Jones Jr. said. “That’s when I really started to realize that it’s coming. It’s getting close.

“The Classic is going to be special, not only because we’re both fishing the tournament, but also because we’re Texans and we’ll have so many friends and family in the stands. My dad has fished (for more than 25 years), and this is the first time he’s gotten to fish a Classic in Texas.”

The elder Jones, who politely says he doesn’t care for being called “Jones Sr.,” is fishing the Classic for the 18th time, and he’s made the Top 10 five times.

In this Classic, he feels like he has two ways to win.

“As parents, you want to see good things happen to your children,” Jones said. “It’s a blessing for our whole family. It would be just as much of a dream come true for me to see him win a Classic as would be to win another one myself.”

But that doesn’t mean he’ll take it easy on his son if it comes down to a two-man race between the Joneses.

Not only is it a source of pride for a father to fish the Classic with (and against) his son, but it also has proved advantageous in other ways. In 1975, Bill and Greg Ward — the son and grandson of TV fisherman Virgil Ward — qualified for their first Classics in the same year. Ever since, it’s been a matter of an established, successful veteran being joined by his rookie son.

In 1988, Guido Hibdon was joined by Dion in the James River Classic, and in 1998, Denny Brauer fished against his son in Chad’s Classic debut on High Rock Lake, North Carolina. In both events, the father won the championship.

If Classic history “three-peats” itself, a second Classic title is in the bag for the elder Jones.

For information about attending the 47th Bassmaster Classic in Houston, go to Bassmaster.com.