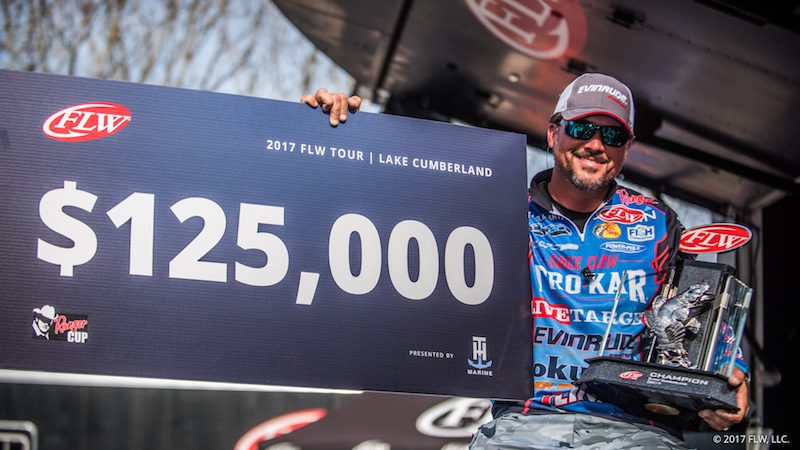 “It feels great to win another tournament – it’s awesome,” said Martin, the 2015 FLW Angler of the Year and 2011 Forrest Wood Cup Champion. “I always try to go out there and be as good as I can be. I’m very blessed.”

Martin’s primary areas this week were on the lower end of the lake, near the dam. He said he preferred locations that had a good population of spotted, smallmouth and largemouth bass, and that he ran to new water each day of the tournament.

“My fish had to be in a creek. Not a main pocket off of the river, but a creek with small arms,” said Martin. “The creeks I liked had lots of little arms. At the intersections there were points, then a straight stretch that led back to pockets with bushes. The largemouth used the bushes in the back of the drain, while the spotted bass keyed in on the bushes along the stretches. The smallmouth liked the secondary points with rock and bushes near the intersection openings.”

Martin caught fish early on in the week with an M-Pack Lures Flippin’ Jig, but did the bulk of his damage with a translucent-shad-colored jerkbait. On the final day of competition, Martin rotated in a Bomber Lures Long A wake bait, which turned out to be a crucial adjustment.

“I caught two that I weighed in today on the wake bait,” said Martin. “It just felt right to throw it. Today the water temperature was rising a little bit, I saw some baitfish activity and it was dead-slick calm. Those are the best conditions to use it in.”

Martin wound up bringing two spotted, two largemouth and a smallmouth bass to the weigh-in stage Sunday. He said his win was secured by a largemouth that weighed nearly 3 pounds that he caught on his final cast of the day.

The top 10 pros finished the event on Lake Cumberland:

The FLW Tour at Lake Cumberland presented by T-H Marine was hosted by the Somerset Tourist and Convention Commission. The next event for FLW Tour anglers will be the FLW Tour at Beaver Lake presented by General Tire, April 27-30 in Rogers, Arkansas.