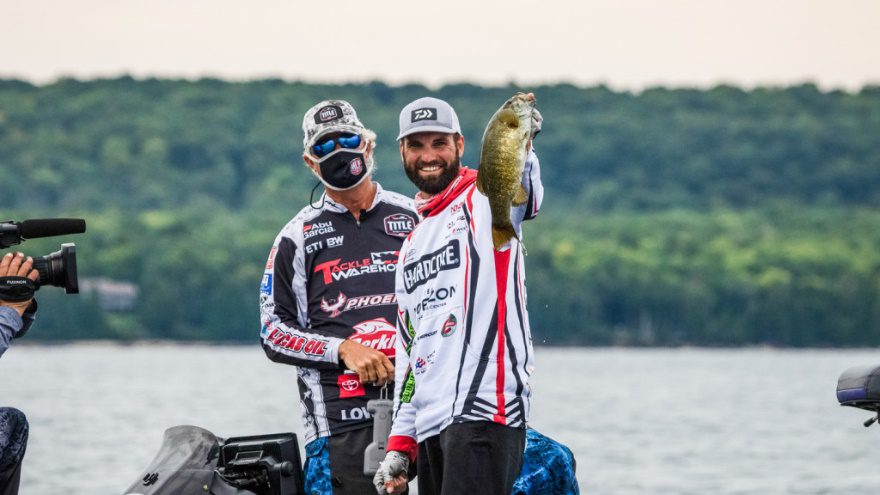 Championship Saturday Field Set as 10 Anglers Advance from Knockout Round

STURGEON BAY, Wis. (Aug. 28, 2020) – Pro Spencer Shuffield of Hot Springs, Arkansas, caught 25 smallmouth bass totaling 86 pounds, 13 ounces, to win the Knockout Round Friday at the Tackle Warehouse TITLE presented by Toyota, the FLW Pro Circuit Championship. Weights are now zeroed as the top 10 anglers advance to the sixth and final day of competition Saturday on Lake Michigan in Sturgeon Bay, Wisconsin, for the top prize of $200,000.

“I am so excited to get back out there. I had a really good day today, but I found some stuff that could be really special – it has the potential for 150 to 200 pounds, tomorrow,” Shuffield said. “I ran 15 miles from my starting spot this morning to a spot that I had found yesterday. I thought it was a sweet spot, about the size of a basketball court, but I found out today it’s like 10-times the size of that. There are thousands of smallmouth there, and they are tucked away and there hasn’t been a boat on them all week.

“The key tomorrow is going to be managing the wind,” Shuffield continued. “The last I saw, they were saying it is supposed to be blowing 15 to 25 miles per hour, which is no joke on a place like this. I made as many waypoints as I could today, every group of fish that I could find. Tomorrow I can spend time drifting over each and every one of those waypoints and I think I can catch a lot of them.”

Shuffield has fished a drop-shot rig exclusively throughout the week. His setup consists of a ½-ounce tungsten drop-shot weight with a No. 1 Gamakatsu Drop/Split Shot hook, rigged on a Phenix M1 7’2 Medium spinning rod with a Daiwa Ballistic LT spinning reel. He throws the rig on 15-pound test Yo-Zuri Superbraid High Vis Yellow line with an 8-pound Yo-Zuri Top Knot 100% Flurocarbon leader.

“The bait doesn’t really seem to matter,” Shuffield said. “I’ve thrown every color (Berkley) Flat Worm that I had and have caught them on all. I threw both sizes of the Gulp Minnow and caught them on that, but the bait that I’ve weighed in the most on this week has been a 3-inch Gulp Leech. It really didn’t seem to matter too much, though. They bit everything that you threw at them.”

Berkley pro John Cox of DeBary, Florida, was the last angler in at 10th place, narrowly beating out Arkansas pro Dylan Hays. Cox caught his last fish – a 4¾-pound smallmouth – around 3 p.m. to move into the top-10, then had to sweat out the last hour of competition as anglers slowly crept up the leaderboard behind him.

“That was one of the most intense things that I have ever experienced, especially because the weights zero tomorrow and everything starts over. I was just praying to stay in the top 10,” Cox said. “There were times when I wasn’t breathing. There were times when I was breathing really heavy. When I finally caught that last fish, I think I threw up in my mouth a little bit.

“I really feel like that if I can execute, the fish are there to do well. I just have to get it together,” Cox went on to say. “It’s going to be exciting either way and I know it’ll be fun to watch.”

The top 10 pros from Friday’s Knockout Round that now advance to Championship Saturday are:

Finishing in 11th through 20th place are:

Complete results for the entire field can be found at MajorLeagueFishing.com.

Overall there were 255 bass weighing 862 pounds, 13 ounces caught by the 20 pros in Friday’s Knockout Round. Canada caught the largest bass of the day – a chunky 5-pound, 2-ounce smallmouth.

The Tackle Warehouse TITLE presented by Toyota, the FLW Pro Circuit Championship, is hosted by Destination Sturgeon Bay. The six-day event features the top 50 professional anglers from the 2020 Tackle Warehouse Pro Circuit season angling for a piece of $820,000, including the first-place prize of $200,000.

Unique to the TITLE Championship, the event is being fished using the MLF catch-weigh-immediate release format. A select group of 25 pros (Group A) competed on Days 1 & 3 (Monday & Wednesday), and the other 25 pros (Group B) competed on Days 2 & 4 (Tuesday & Thursday). The top-10 pros from each group based on their cumulative two-day total advanced to Day 5 (Friday). Now, only the top 10 pros continue on to the sixth and final day of competition Saturday, with the winner earning the inaugural Tackle Warehouse TITLE Championship Belt presented by Toyota.

Attendance is limited to anglers and essential staff and fans are encouraged to follow the event online through expanded broadcast coverage at MajorLeagueFishing.com and read the daily coverage, live blogs and photos at FLWFishing.com.

The MLF NOW! broadcast team of Chad McKee, Marty Stone and J.T. Kenney will break down the final day of competition Saturday from 7:45 a.m. to 4:45 p.m. They’re joined by FLW Live hosts Travis Moran and Todd Hollowell, who will be reporting and providing from-the-water analysis from Sturgeon Bay.

The 2020 Tackle Warehouse Pro Circuit featured a field of 150 of the top professional anglers in the world competing at six regular-season events around the country. The top 50 anglers in the Angler of the Year (AOY) standings after the six events qualified to compete in this event, the inaugural Tackle Warehouse TITLE presented /by Toyota. 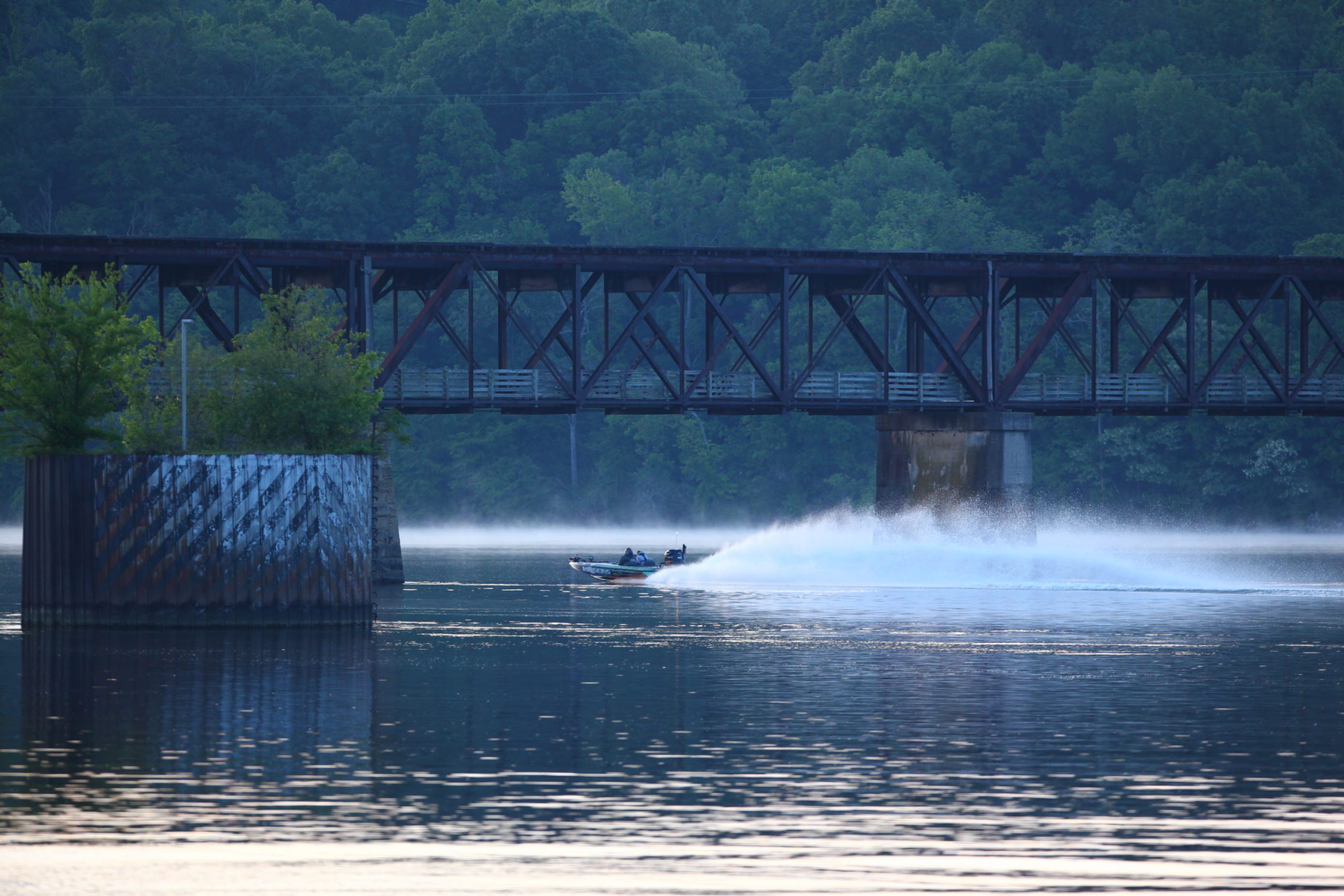 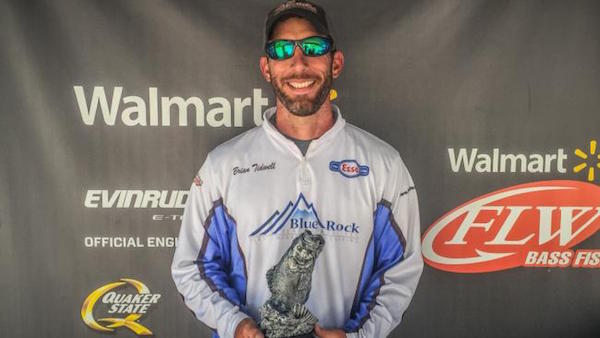 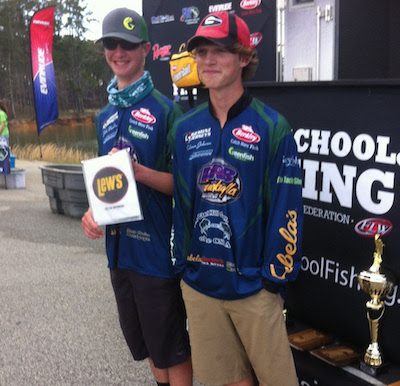 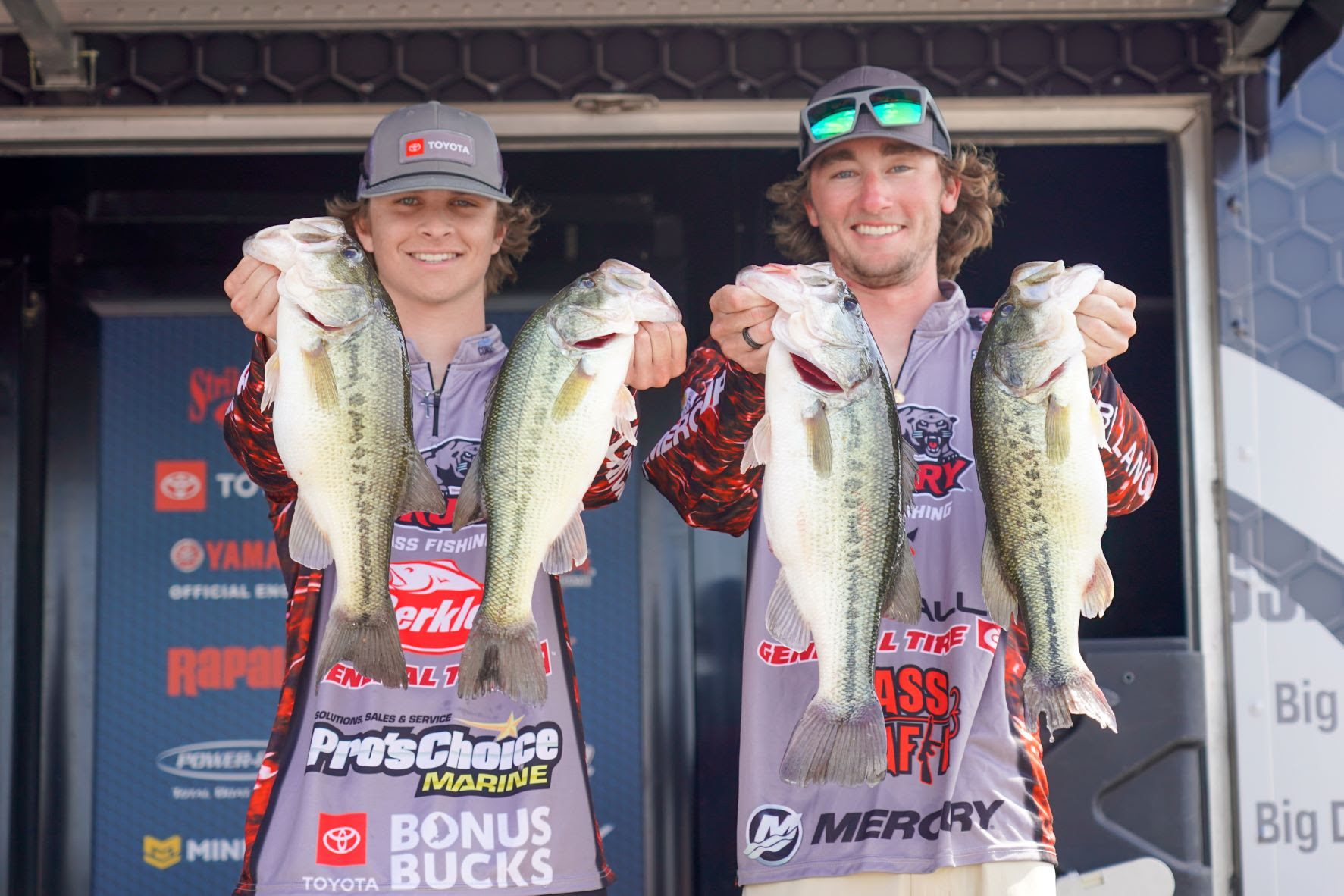