ANDERSON, S.C. — Temperatures in South Carolina have heated up and so has the fishing on Lake Hartwell as young anglers from across the country prepare for the Abu Garcia Bassmaster High School Championship presented by Academy Sports + Outdoors.

Featuring eight members of the Bassmaster High School All-American Fishing Team presented by Academy Sports + Outdoors and 23 All-State anglers, a field of 315 boats will compete on the historic fishery for a chance at earning the prestigious trophy. Tournament days are scheduled for Aug. 11-13 with the full field competing the first two days and the Top 10 competing on Championship Saturday.

Last year at Chickamauga Lake, hometown anglers Gage King and Banks Shaw of Sale Creek High School weighed in a three-bass limit of 20 pounds, 11 ounces on the final day to win with a three-day total of 45-6. Shaw will be competing again this year alongside a new partner, BJ Collins.

Unlike the previous championships held on Tennessee River reservoirs like Kentucky Lake and Chickamauga Lake, Hartwell features a large population of spotted bass that like to chase blueback herring.

While spotted bass will play a significant role, Bassmaster Elite Series champion Bryan New said largemouth will ultimately decide the winner. The South Carolina pro added that the overwhelming majority of bass caught by the winning team will be relating to the herring.

Hartwell is a vast fishery, with access to the Tugaloo and the Seneca River arms as well as Six and Twenty Creek, so teams should be able to spread out. New predicts canepiles will be the predominant focus while brushpiles may also factor.

“It’s a very well-known thing,” he said. “Running the canepiles with a Zoom Super Fluke or chrome topwater bait are two killers on that deal and, of course, a drop shot. Those canepiles are typically on the long, tapering points and there are about 1,000 of those on Hartwell. Of course, some are better than others.”

The last few weeks have seen several waves of afternoon thunderstorms, which have the shallows slightly stained. There have been plenty of active bass in those areas.

“The back ends of the creeks and up the river have a fair amount of stain to them,” New said. “There is a decent shallow-cranking bite, a ChatterBait bite and a good topwater deal going.”

While 20-pound bags can be caught this time of year, New notes it can also take closer to 14 pounds to win one-day summertime events. It all depends on the timing, but he added if a team can catch 15 or 16 pounds a day, they will have a good shot.

Teams will launch from Green Pond Landing and Event Center at 6:20 a.m. ET and return for weigh-in starting at 2:20 p.m.

The Bassmaster High School National Championship is being hosted by Visit Anderson. 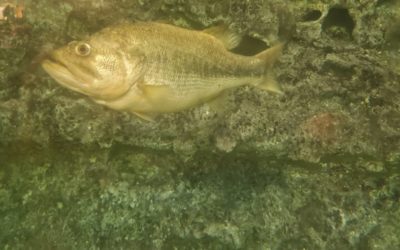