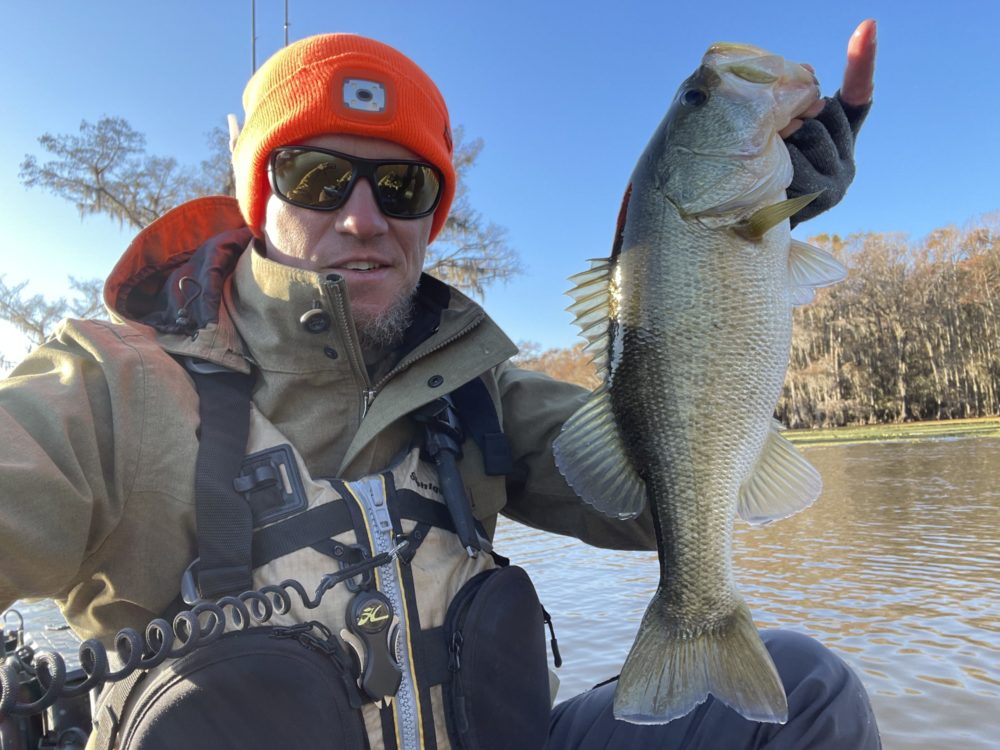 I initially planned to write about some proven techniques for catching winter bass. Maybe I’d mention a few specific baits and share a few tricks. But as I struggled to organize my thoughts into an outline, I had a realization. I’m not that good at catching them in winter. It’s actually my least favorite time of year to be on the water. During the coldest months, I often spend more time dreaming of spring than with a line in the water. Still, every winter I find myself venturing into the elements at least a few times to chase little green and brown fish. And while I’m no cold-water specialist, maybe some of my winter experiences can help you find some fish over the next few months.

Before jumping fully into wintertime, I want to share some thoughts about buzzbaits. They’re not what I consider a good wintertime lure, but they’re the last topwater I throw as fall gives way to winter. Depending on where you live, a buzzbait might work for you right now. Early last fall, I bought a bunch of parts and started assembling my own buzzbaits. Naturally I tried different head designs, wire diameters, and blade sizes, then spent a lot of time testing them. I had success around laydowns, water willow and standing timber throughout the fall, as water temps fell to the 60s and below. I even caught fish in 50-degree water. The key in the colder water was to move the bait slowly, just fast enough to keep it on the surface. I like a ¼ oz buzzbait with a single, oversized blade and a toad trailer, but counter-rotating blades or a double-bladed bait can achieve the same slow speed. Something about a slow, squeaking buzzbait triggers the bass, and it might draw a few, late-season topwater strikes for you before the cold sets in.

Now on to winter. Fish still bite in cold water and it’s even possible to catch them from the bank. Probably 15 years ago, before I had a boat of any kind, I caught some winter bass along the C&O canal in Maryland. A section of the canal had been drained to allow for construction in Georgetown. Most of the canal looked like a mud puddle, only inches deep, but a few stretches had pools that were holding fish. The water stayed pooled in these sections during the summer and fall, and it was the only haven for the fish that remained. I visited a few times in the warmer months and then, on a whim, made a trip in December. It started snowing while I was hiking to the spot, and my feet were cold and wet by the time I arrived. To my surprise, the fish were still chewing. I caught a fish or two on a finesse jig. Then my biggest, around 3 pounds, came on a weightless fluke. It was one of my first successful winter outings, and it drove home the importance of just getting out there. Whenever you’re on the water, regardless of the conditions, you have a chance at catching them. You’ll never catch anything while sitting in your living room.

Fast forward a few years and I’d purchased a small, plastic johnboat from Bass Pro Shops. My family had an annual get-together in South Carolina for Christmas, and I started bringing my boat and fishing small lakes that were nearby. Water temps were typically in the mid to high 40s or low 50s. I had quite a few unsuccessful trips where, quite literally, I only caught a cold. Then I learned to catch bass yo-yoing a lipless crankbait. It’s a pretty standard retrieve, but the first time it worked for me was in South Carolina. I was using a Strike King Redeye Shad and fishing it slow, almost like hopping a worm. I would let it hit bottom and sit for a second or two, then lift just enough to feel the bait vibrate. Once I felt the bait pulse, I’d let it sink back to the bottom and repeat. The ½ oz size was my go-to, but the ¾ produced some nice fish too. It’s a bigger profile, but it still has a relatively slow fall for its weight. When the water was a little warmer, I’d experiment with faster retrieves, but the simple, slow yo-yo was the most productive in the cold. I still remember a subtle point with a hard spot that produced a pair of 5 pounders one chilly afternoon. I also caught bass – and some big crappie – around the edges of submerged brush. Bottom composition is an important consideration for this technique. You want a relatively hard, clean bottom. If it has decaying grass or muck, you’ll spend all your time picking slime off your baits. 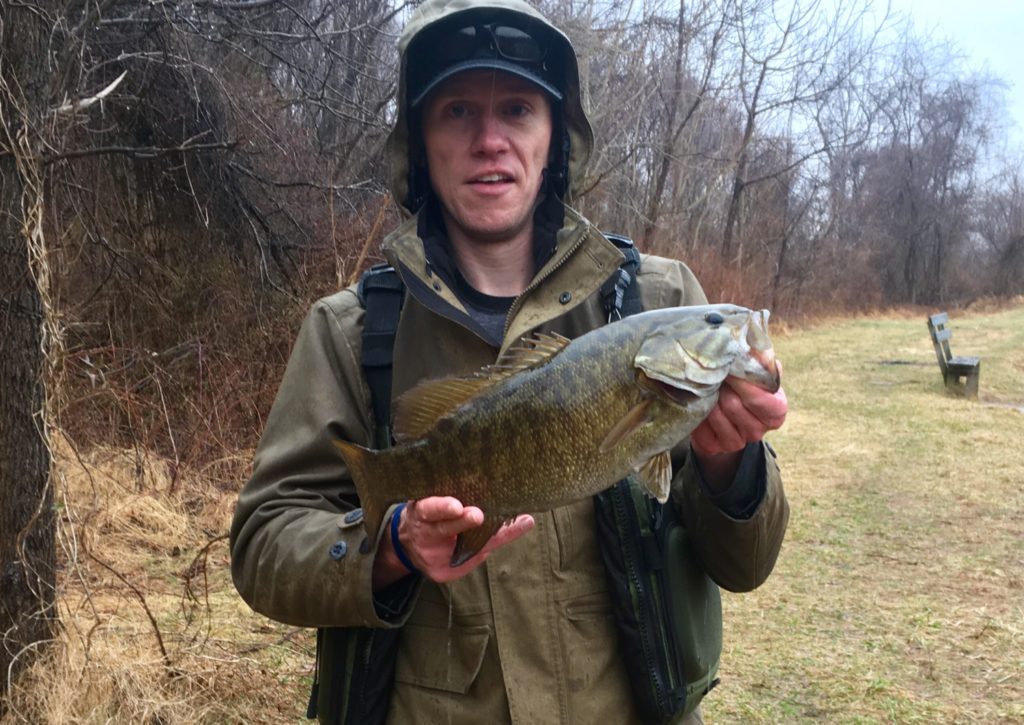 Another cold-water lesson I learned, don’t overlook small bodies of water, provided they aren’t frozen. I’ve had some fun days fishing private ponds – with permission – after a warming trend. Small lakes and ponds heat up faster that the giant lakes, so a few warm, sunny days can put fish in a cooperative mood. As a teenager, I rode my bike to a small lake after a few 70-degree days one February. Water temps were probably still in the 40s, but I caught a 3 lber – a freak-out-sized fish at the time – dragging a black and blue jig. On a more recent outing with my kayak, I used a drop shot to catch some nice fish from less than 8 feet. It was January and water was in the 40s, but consecutive 60-degree days had temperatures climbing. That lake had a mucky bottom that made jigs or anything with treble hooks ineffective. But a drop shot rig allowed my bait to hover enticingly off the bottom and out of the muck. I like a small, subtle worm on my drop shot rig in winter. My favorite is the Missile Baits Bomb Shot, but there are lots of great baits out there. Discount Tackle offers a wide selection of baits, hooks and weights for rigging a drop shot.

Fishing around warm-water discharges is another way to beat the cold. Whether from wastewater treatment sites or nuclear generators, these discharges release warm water and draw concentrations of fish in the winter. I lived in Northern Virginia for many years and frequented discharges on the Potomac River. The treated water was typically 60 degrees, much warmer than the rest of the river. Influx areas are typically gin clear and they tend to get lots of fishing pressure, so I relied heavily on drop shots, wacky rigs, ned rigs and suspending jerkbaits. On overcast or windy days, I’ve even caught them with a spinnerbait or lipless crankbait and, on rare occasion, a topwater plug. If you find a warmwater discharge that isn’t getting much pressure, you can experience awesome fishing when air temperatures are below freezing.

My most recent winter lesson came from tournament on Lake Fork last February. East Texas had been battered by an ice storm that dropped water and air temps, even freezing some shallow backwaters. Air temps were in the 20s and the water was 47 degrees where I fished. After catching a single fish on day one, I switched from jigs and a Carolina rig to finesse tactics for day two. I used a Missile Baits 48 on a 1/16 oz weighted wacky jig head, something I’d never tried in water that cold, and I fished it against standing trees ranging from 5 to 14 feet. I got two bites within the first 30 minutes, so I stuck with the stickworm all day. Fish were still lethargic, and I only got seven bites, but my best five measured 95 inches. It was my best tournament bag for ‘22, and it came during some of the worst conditions I fished in all year. My takeaway, there’s never a bad time to fish a stickworm. It might not be my first choice in winter, but I always have some in the kayak.

Winter fishing has some inherent risks, so I’ll wrap this up with a few safety suggestions. It’s important to dress in layers and wear proper cold-weather gear. Beanies, thick neck gaiters, and wool gloves are essential for me. My hands always seem to get wet when fishing, and I’m not a fan of frostbite or numb fingers, so I bring several extra pairs of gloves. Similarly, it’s a good idea to have a dry bag with a change of clothes. Should you end up in the water, you’ll need to get out of the wet clothes as soon as possible. As always, wear a lifejacket. Bulky winter clothes and icy water make it harder to swim. You’ll want the assist from a PFD. A final suggestion, tell a family member or friend where you’re fishing, give them a rough itinerary, and let them know when you’re off the water. Regardless of your experience level, it’s better to be safe than sorry. Stay safe and go catch a giant this winter. 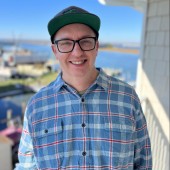 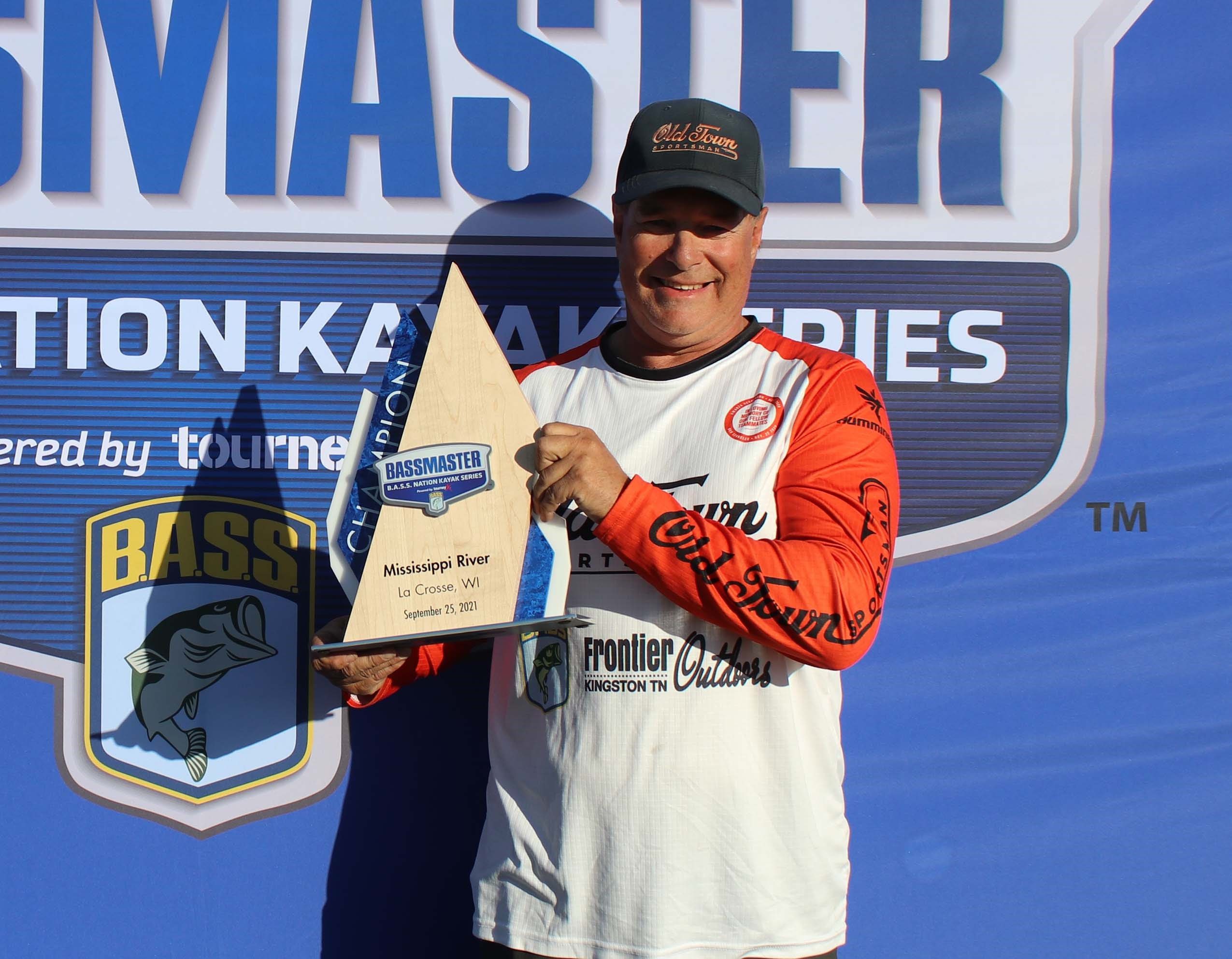 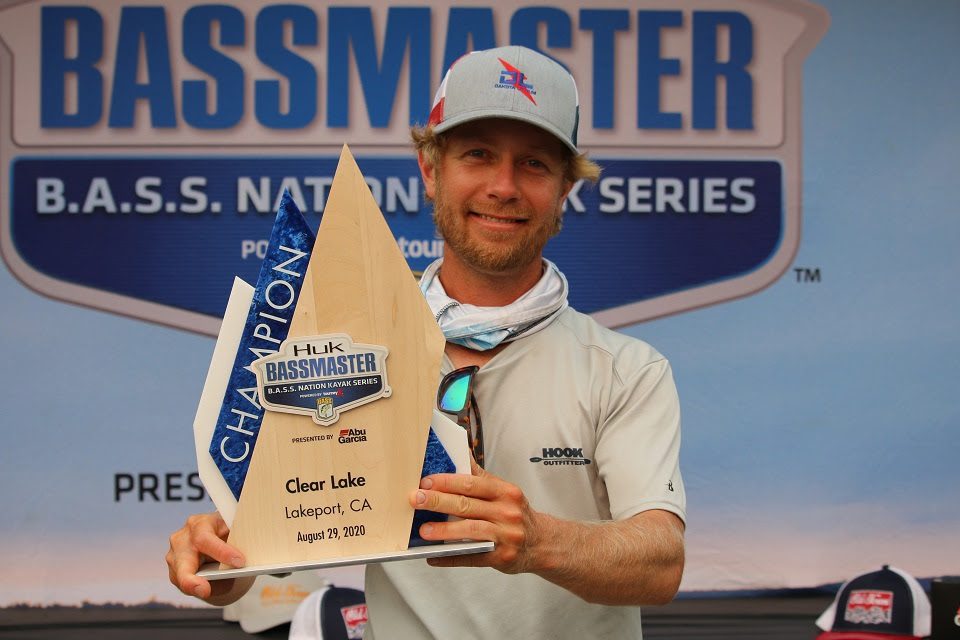 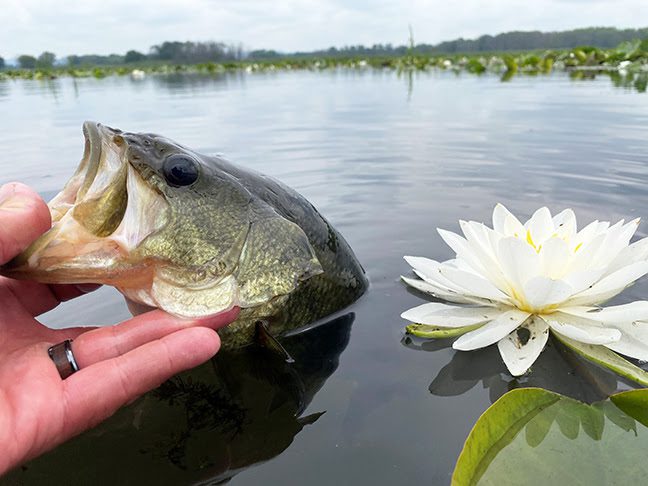 HOBIE B.O.S. ANCHORED BY POWER-POLE® TAKES ON THE MIGHTY MISSISSIPPI 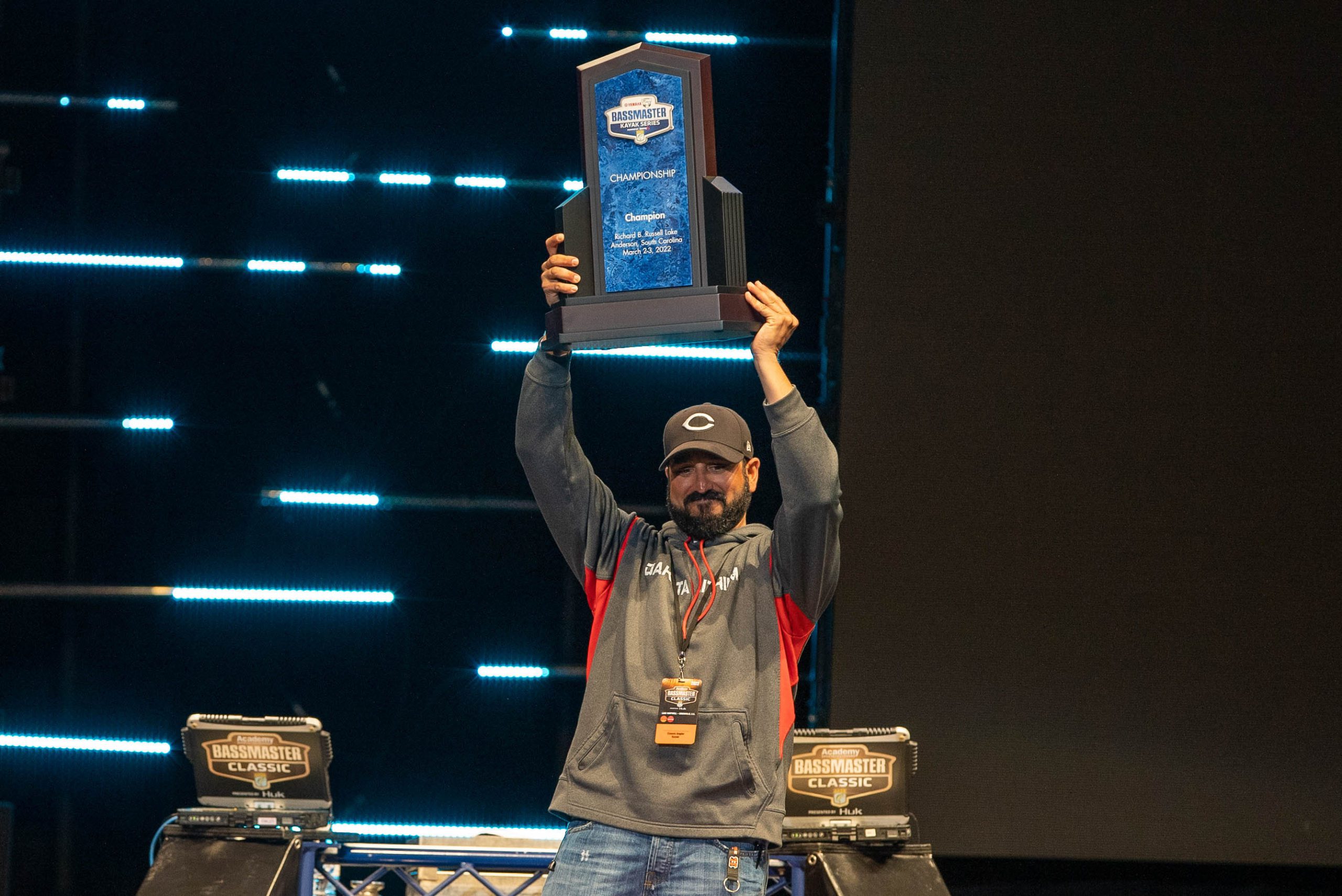