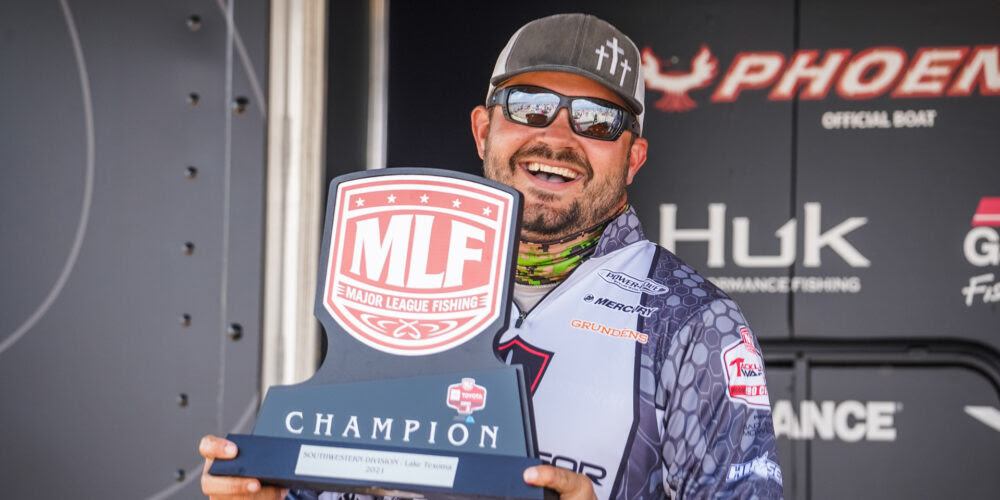 KINGSTON, Okla. (March 28, 2021) – Toyota Series angler Evan Barnes of Hot Springs, Arkansas, brought a five-bass limit to the scale Saturday weighing 13 pounds even to win the three-day Toyota Series presented by A.R.E. at Lake Texoma Presented by Abu Garcia in Kingston, Oklahoma. Barnes’ three-day total of 14 bass weighing 42-10 earned him the win by a 3-pound, 3-ounce margin over second-place angler Cameron Mattison of Benton, Louisiana and earned Barnes the top payout of $40,906 in the second tournament of the 2021 Toyota Series Southwestern Division.

“I’ve had a tough year, on the [Pro Circuit], missing checks and stuff,” said Barnes. “This year, I felt like I was led to fish full-time and I made that big leap of faith. Because I’ve had such a tough year, and financially there were a lot of questions, I really didn’t know if I was going to come to this tournament. I wanted to come, but, I’m telling you, I literally started praying. I was like ‘Lord, if you want me to come to this tournament, then you need to let me know.’ I felt Him urging me to go and knew I was going, but without that nudge, I wouldn’t even be standing here today.”

A pastor and a constant participant in Meet the Pros ministry events on the Pro Circuit, Barnes speaks about his faith as eloquently as anyone. On Saturday, after catching nothing off all his best areas, his hopes of a win were slipping away.

“I didn’t have a bass at 1 o’clock,” said Barnes. “Man, I pulled up on this point, right by weigh-in, and I caught a 2-pound smallmouth. I wanted to go back to my main areas and give them one more shot, but for whatever reason, it had to be the Lord, I just turned around and made a few more casts. I bombed that swimbait up and caught like a 4-pounder. We literally caught all of our fish over there, I caught my last one with 10 minutes to go and half the people here were watching me fish.

“It was just nuts –  I didn’t have a single bass at 1 o’clock. Then I pulled up on that point and caught five and my co-anger caught four and we both win the event.

The brush fish were difficult to catch, but Barnes said his Garmin LiveScope helped tremendously.

“I think there were at least three or four fish this week I would not have caught without LiveScope,” said Barnes. “It was very difficult to get the fish to bite. You could see them everywhere, they were on every brush pile, and you could throw an A-rig out there and they wouldn’t bite. But every once in a while, you’d get one to track it. One of the big ones I caught this week, I watched it track it, and finally shook it right in her face and she grabbed it.”

The story of Day 1, and the entire event to an extent, was the flurry of smallmouth that Barnes ignited to stake the lead. With a few fish in the livewell, Barnes pulled up on a point where he’d gotten a few bites and landed a 2-pound bass in practice.

“I rolled over there to that point, and the first one I catch is a 4-pounder,” said Barnes.

He and co-angler Billy Sammons proceeded to light the world on fire. At one point, Barnes had a fish breaking water with his bait in his mouth while he was getting ready to net a fish for Sammons. Somehow, not only did he not lose his rod overboard, he landed the fish.

“That just goes to show you,” said Barnes. “When it’s your time, you can’t do anything to stop it.”

Christopher Temple of Krugerville, Texas took home an extra $1,000 as the highest finishing Phoenix MLF BIG5 Bonus member. Boaters are eligible to win up to an extra $35,000 per event in each Toyota Series tournament if all requirements are met. More information on the Phoenix MLF BIG5 Bonus contingency program can be found at PhoenixBassBoats.com.

The Toyota Series at Lake Texoma was presented by Abu Garcia and was hosted by Discover Durant. It was the second of three regular-season tournaments in 2021 for Southwestern Division anglers. The next event for Toyota Series anglers will take place March 31 – April 2 – the Toyota Series at Dale Hollow Lake in Monroe, Tennessee. For a complete schedule, visit MajorLeagueFishing.com.

The 2021 Toyota Series presented by A.R.E. consists of six divisions – Central, Northern, Plains, Southern, Southwestern and Western – each holding three regular-season events, along with the International division. Anglers who fish all three qualifiers in any of the eight divisions and finish in the top 25 will qualify for the no-entry-fee Toyota Series presented by A.R.E. Championship for a shot at winning $235,000 cash, including a $35,000 Phoenix MLF BIG5 Bonus for qualified anglers. The winning Strike King co-angler at the championship earns a new Phoenix 518 Pro bass boat with a 115-horsepower Mercury outboard.

The 2021 Toyota Series Championship presented by A.R.E. will be held Oct. 28-30 on Pickwick Lake in Counce, Tennessee, and is hosted by the Hardin County Convention and Visitors Bureau.