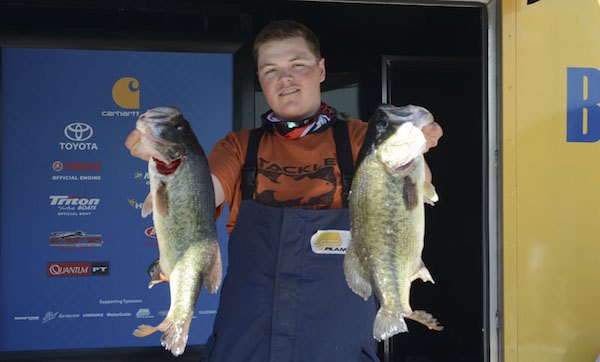 “This will be a great tournament,” said Andrew Loberg, a competitor from Chico State who grew up near Folsom Reservoir. “I look forward to having B.A.S.S. out here.”

Loberg posted a fourth-place finish with his teammate Bo Braswell in last year’s Western Regional on Clear Lake. Now that Braswell has graduated, Loberg will be competing with Travis Bounds. Loberg and Bounds have fished on Folsom together since they were 10 years old.

The bass will be in all stages of the spawn, Loberg said, but whether they’re prespawn, midspawn or postspawn, don’t expect them to be very active.

“We’re experiencing a warming trend here on Folsom,” he said, “and the weather will be in the mid-80s this week. There will be lots of boat pressure, party boats and wakeboarders. It will be tough for fishermen to find an area that isn’t pressured. And the fish won’t be very active with all that pressure.”

Andrew Sayles, past president of the California B.A.S.S. Nation, agrees. “Folsom is not known for bigger tournaments because after two days of pressure, the fishing gets tough.”

Sayles, who lives near Folsom, says anglers have lots of great places to fish, from breaks to dropoffs to sunken trees his club has planted. Competitors will not have a problem catching fish, he said; their concern will be catching fish that are big enough.

Loberg agrees, adding that most limits will have several spotted bass in them, but to win the tournament, the key is having at least a 3- or 4-pound largemouth or two to anchor the bag.

“I imagine the winner will average 10 to 11 pounds a day, putting the winning weight around 30 to 35 pounds,” Loberg said.

Both Sayles and Loberg said they expect to see competitors look for a reaction bite in the morning with topwaters and follow it up with a drop shot, jig or shaky head as the sun comes up.

The full field will compete on Days 1 and 2, but on the final day, only the Top 20 teams will fish. Anglers are vying for a spot in the 2015 Carhartt Bassmaster College Series National Championship presented by Bass Pro Shops, July 9-11, on Lake DuBay in Wisconsin.

Watch the tournament unfold at Bassmaster.com.