Bassmaster Elite Series champion Carl Jocumsen and his wife Kayla spent Championship Sunday picking up trash along the shores of Lake Guntersville, inspiring others to join them. 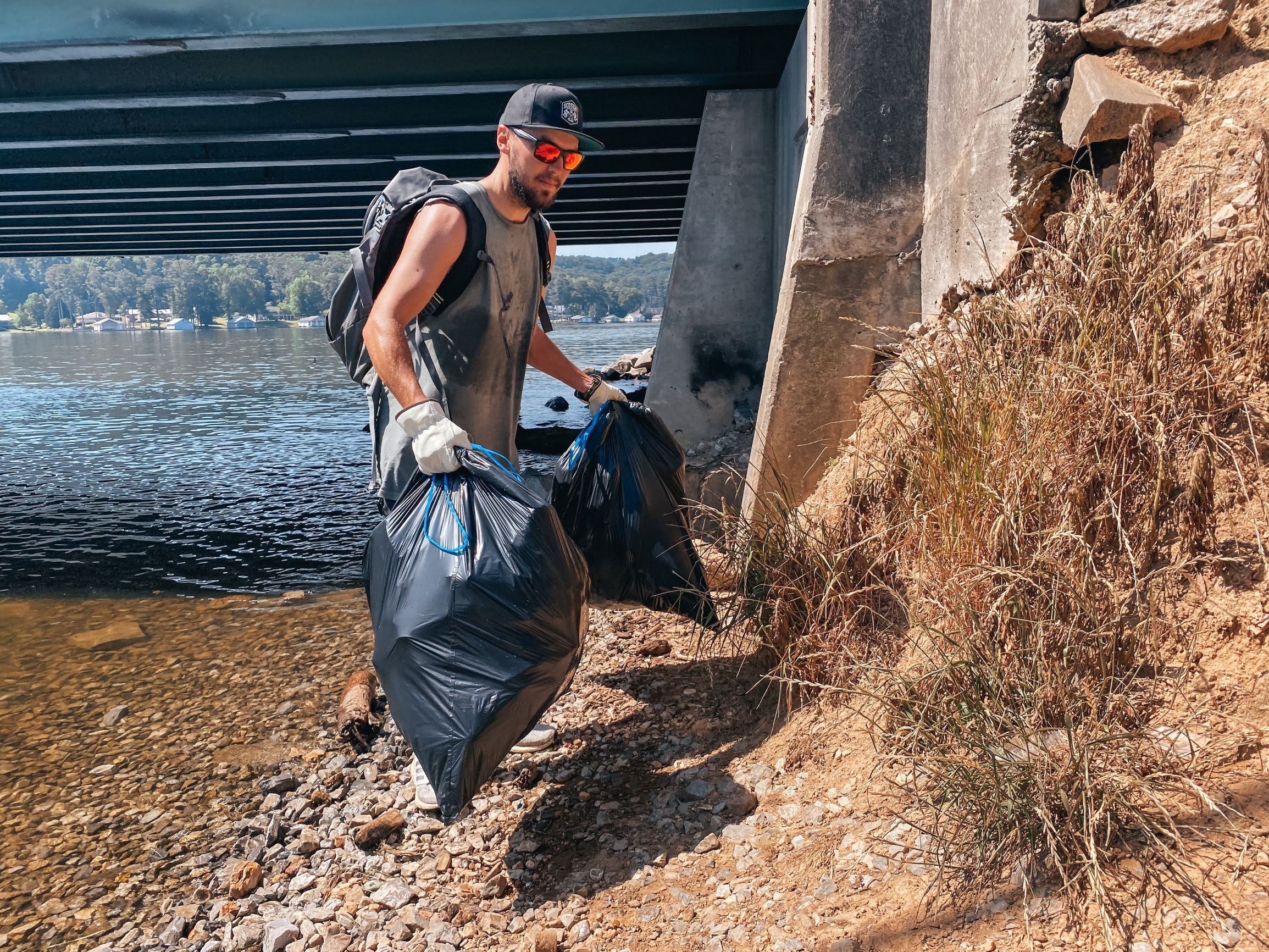 SCOTTSBORO, Ala. — Bassmaster Elite Series pro Carl Jocumsen had just finished a week of fishing, practicing for 15 hours each day before going all out for the Berkley Bassmaster Elite at Lake Guntersville, where he finished 13th. After six days of grinding it out from sunup to sundown, you’d think sleeping in and relaxing was the plan for Championship Sunday.

Instead, this Australian angler and his wife, Kayla, who now make their home in Tennessee, got up early and went out to pick up trash around the lake. It wasn’t a spontaneous or one-time idea.

“Kayla and I had been thinking about doing something to give back to the community that welcomed us to fish on their lake,” Carl said. “Wherever we are, during practice, I always fill my livewells with rubbish that I find floating in the water.”

The idea to extend that to land came after Jocumsen observed the trash left behind by shoreline anglers.

“It always bothered me to see so much rubbish around bridges, and there are many of those on Guntersville,” Jocumsen said.

The Jocumsens set out with a load of trash bags. They picked up trash on both sides of three bridges, collecting 10 full garbage bags during the three-hour outing.

“It was overwhelming how much trash was left behind,” Kayla said. “The reality of it all, and doing our part in a small way, left us feeling really good about the difference you can make.”

The hard work didn’t go unnoticed by shoreline anglers encountered by the Jocumsens along the way.

“It changed us, and also left a lasting and good impression on some of the people we met at the bridges,” Jocumsen said. “People saw us doing it, and then they wanted to do it, too.”

Strangers became united for a common effort when the Jocumsens gave them trash bags to use.

“People were so grateful, and it rubbed off on us,” Kayla said. “It was a life-changing experience.”

Jocumsen was later recognized by another angler, who recognized him as fishing the tournament. He was curious as to why Jocumsen was out on a Sunday morning picking up trash on Guntersville.

“I told him it doesn’t matter where you live, and that if more people did this it could make a difference everywhere,” Carl said.

That’s the long-term idea for the Jocumsens. Their plan is to stay over after each future Elite Series event and even recruit volunteers and other resources to join them in trash pickups around the lakes.

Conservation efforts are a cornerstone of the B.A.S.S. tradition, and leading efforts to collect litter can have a sizable impact on the waterways the organization and its fans frequent. In the past year, local volunteers have gathered lakeside during Bassmaster Elite events on Lake Guntersville, Lake Eufaula, Lake Fork and the St. Johns River to collect litter as part of the B.A.S.S. Nation Clean-Up Challenge sponsored by AFTCO and Huk.

“At every stop we made, it seemed like there was a lack of education about the harm leaving trash behind does to the environment,” Jocumsen said. “We want to do our part to change it.”

“B.A.S.S. was founded on three things: tournament fishing competition, youth participation and conservation,” B.A.S.S. Conservation Director Gene Gilliland said. “(B.A.S.S. Founder) Ray Scott used to always talk about the three-legged stool. This is one of the legs, and it doesn’t get talked about a lot.”