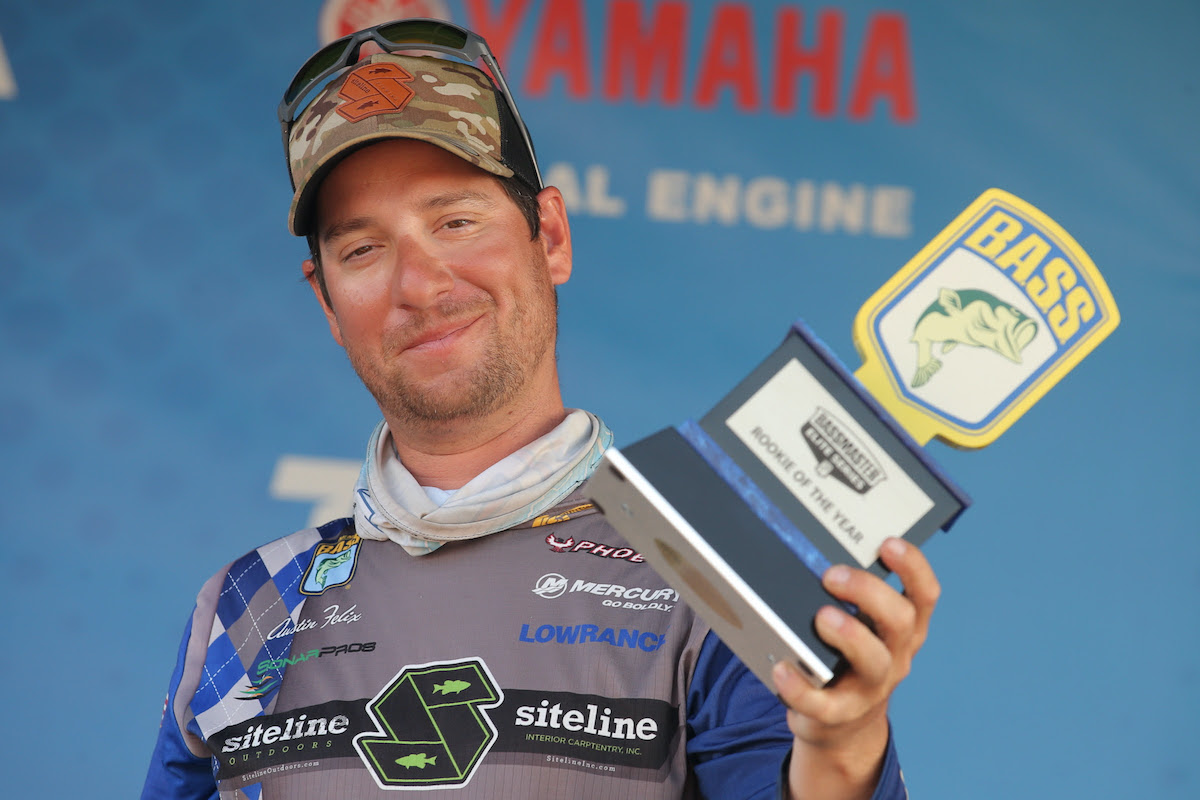 BIRMINGHAM, Ala. — A strong run through rescheduled tournaments gave Bassmaster Elite Series pro Austin Felix a shot at winning the Bassmaster Angler of the Year title, and although disappointed his fortunes fell short, the native of Eden Prairie, Minn., is proud to have accomplished his initial goal of winning Elite Series Rookie of the Year.

“Rookie of the Year is really special because you get one shot at it. You don’t get a do-over,” Felix said. “It’s bittersweet to be that close to AOY, but I’ll get a shot at it next year.”

Felix might have won this year and swept the season awards if not for subpar first and last events.

“I knew I dug myself a bit of a hole,” Felix said of his 64th-place finish in the season opener on the St. Johns River, “but I’ve been thinking about ROY the whole season.”

Well-versed at clear-water fishing, Felix banked on making a move when the Elite Series headed north to smallmouth waters at the St. Lawrence River (25th), Lake Champlain (18th) and Lake St. Clair (13th). Those finishes pushed him into the Top 15 in AOY standings, but Felix never displayed his trademark consistency.

“I had one stellar day and one mediocre day where I let it get away from me,” Felix said. “It seemed like the third day I’d catch them again, but I could never climb up into that Top 10. I underperformed up north, not making any Top 10s.

“It wasn’t until tournaments on Santee Cooper and Chickamauga Lake that I was able to put two good days together to have a good event. After the smallmouth tournaments, I was at the point of just trying not to give back all the points I gained up north. Fortunately, the fall fishing played into my hand a lot more than I thought it would.”

The COVID-19 pandemic forced B.A.S.S. to move four events to fall, previously unexplored territory for the Elites. Elite Series tournaments on Lake Guntersville, Santee Cooper Lakes, Chickamauga Lake and Lake Fork were moved to times requiring the anglers to figure out the current conditions, not rely on past patterns. Felix began the run with a 40th on Guntersville but maintained his position in the points race.

“What I was most afraid of was Santee Cooper. To be fortunate enough to find that group of offshore fish that allowed me to coast to a solid limit every day, it was really exciting,” said Felix, who competed for the title and ended up fourth.

That finish moved him to sixth in the AOY standings. Felix followed it with a fifth at Chickamauga Lake that put him just five points behind the AOY leader heading into the season’s final event on Lake Fork. While there was a great chance, it wasn’t to be on Fork, where Felix finished 68th and dropped to seventh overall. He could only get a handful of bites each day in practice on the famed Texas fishery, “but it deteriorated over the tournament — I just couldn’t get it done.”

What he did get done is put himself beside the names of previous ROYs like Drew Cook, Jake Whitaker, Drew Benton, Brandon Card and 2020 Bassmaster Classic Champion Hank Cherry. Felix totaled 651 points to top Kyle Welcher (639) and Lake Eufaula champion Buddy Gross (638). Japan’s Taku Ito, who led the AOY standings for a short time at midseason, finished fourth with 606.

“This rookie class has been incredibly talented,” Felix said. “It took Buddy Gross two tournaments to win his first blue trophy. Kyle Welcher proved to everybody that he isn’t just a YouTube kid. He caught the biggest fish of the year. All we had to do was go to New York and Taku made himself a viral sensation. Any one of those guys would have totally deserved this.”

Felix refined his fishing acumen while crossing the county competing for the University of Minnesota (he won an FLW College National Championship in 2014), FLW and Basspro.com Bassmaster Opens events.

“I was under this false impression that local knowledge was key at every lake, which is totally not the case,” said Felix. “It showed me that by doing some research and understanding how regional fish react, you can compete even if you don’t know where every brushpile is.”

Now, Felix is confident that he can go to new places, or at new times, and have a decent shot at discovering a pattern and competing.

“I think that with my angling repertoire, different techniques that I’m confident and comfortable with, I’m going to be able to figure out something they’re going to bite if I can just find the fish,” he said. “I’ve become more comfortable regionally, and I felt like I’ve learned a lot to try to compete across the country.”

Admittedly more of a consistent angler than the guy who wins big tournaments, Felix said he’s working on learning how to finish. Felix is ready to prep his new Phoenix boat and himself for the 2021 season. He’s already thinking about “how I can improve on last year. As soon as the season’s over, I take a few days off and I’m ready to start again.”

And this year, Felix will be starting the season with a title that will follow for the rest of his career: 2020 Bassmaster Elite Rookie of the Year.