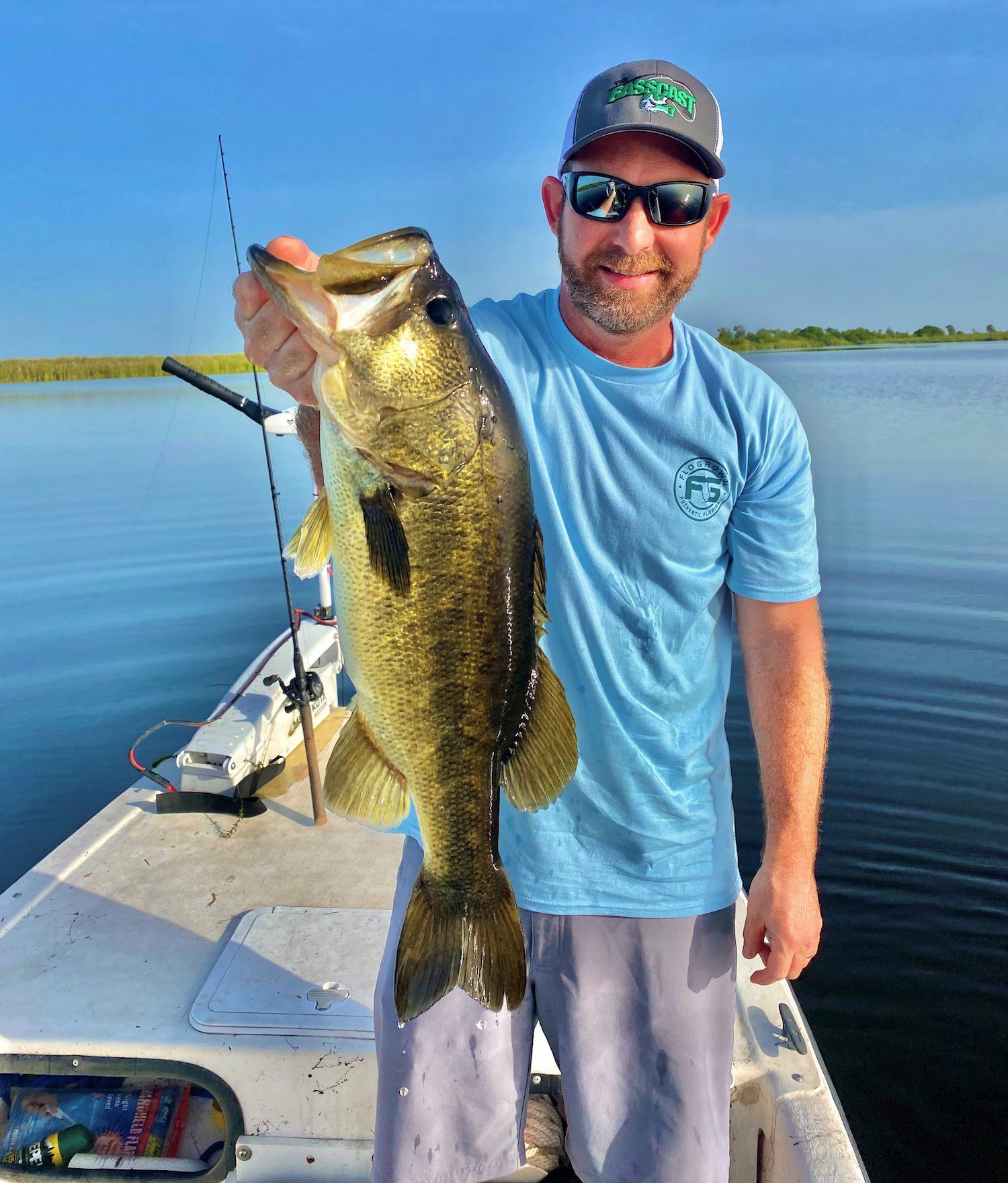 FLO GROWN
Florida reigns supreme for growing big bass and big alligators
With his hand on the tiller our guide Hunter Hall keeps the skiff’s bow close to the shoreline as Bob points to several Jurassic sized alligators along its edge. Hunter, whose family owns https://floridahuntingadventures.com/ conducts year round bass fishing charters and alligator hunts in south Florida where my friend Bob Carnes is attempting to complete both in a single day.

Located a little more than hour’s drive southeast of Orlando, Bob and I met Hunter at the Headwaters Lake public ramp at first light to fish in the morning before we would head south to his family’s ranch for the gator hunt that afternoon. After a short boat ride along the Lake’s main navigation channel we veered left through an opening of hyacinths and into a small cattail lined cove. After only a few casts Bob set the hook into a monster sized largemouth that was too heavy to jump completely out of the water yet managed to spit the hook after sloshing under the matted hydrilla. “Did you see the size of that fish?” He said excitedly, while reeling in his line. “I told you there’s some big ones in this lake,” laughed Hunter. Although we never connected with another lunker of that size as late summer isn’t exactly prime fishing for any Florida lake, Bob and I did however manage to both land at least a dozen or so thick Florida largemouth with several nearing five pounds before the unbearable midday heat signaled the end to our charter. 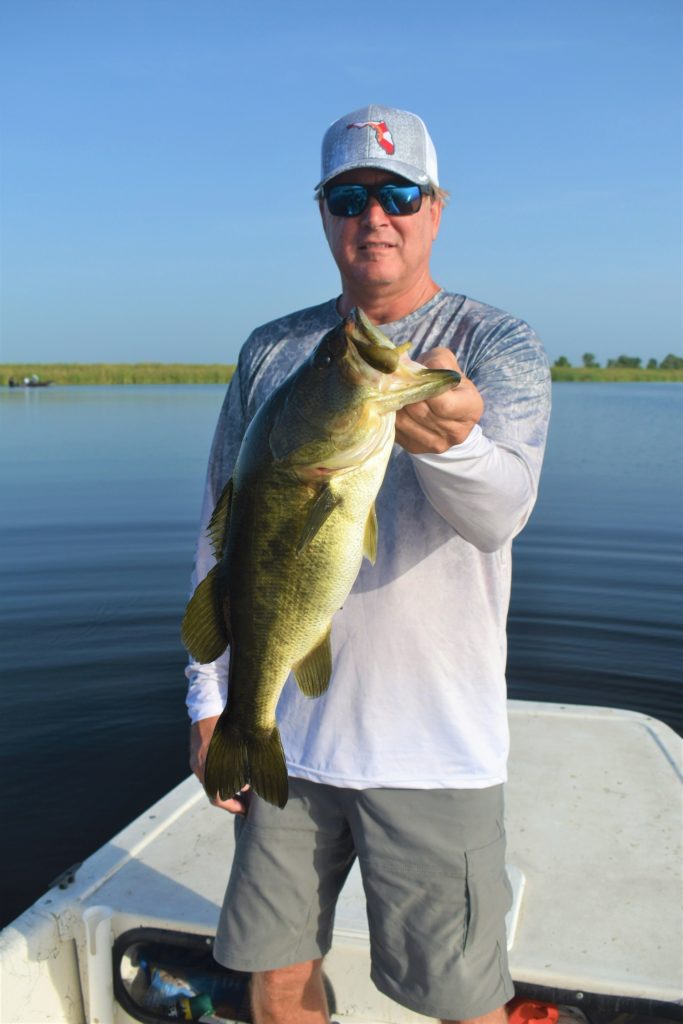 Headwaters Lake
After opening to the public less than two years ago, the popularity of this manmade 10,000-acre impoundment in Florida’s Indian River County has exploded. Celebrity anglers like Roland and Scott Martin have filmed dozens of giant stringers they’ve caught on the lake and various media outlets have reported local anglers catching ten pound fish on every outing during springtime that has fueled the frenzy as evident by the dozens of boat trailers parked at its ramp every day of the week. Like most of the famous big bass lakes that Florida is known for, Headwaters or Fellsmere Reservoir as its officially titled is located in the southern region of the state within the golden triangle of largemouth heaven. Sharing a border with the famed Stick Marsh, the lake sits 50 miles to the southeast of West Lake Toho and 50 miles to the northeast of Lake Okeechobee which also include Lake Kenansville and the Kissimmee Chain of Lakes.

The St. John’s River Water Management District (SJRWMD) and Florida Fish and Wildlife Conservation Commission (FWC) manage the reservoir’s fishery which was first constructed by excavating the impoundment leaving several pre-existing deep pockets that were already within the former marsh, then using heavy equipment placed underwater structures and beneficial vegetation throughout prior to flooding it. The result became thousands of acres of prime largemouth habitat. With an average depth of around six feet, the lake follows the successful blueprint of both its predecessors Stick Marsh and Farm 13, both modeled with the same shallow topography, flood control infrastructure, and catch and release only regulation. 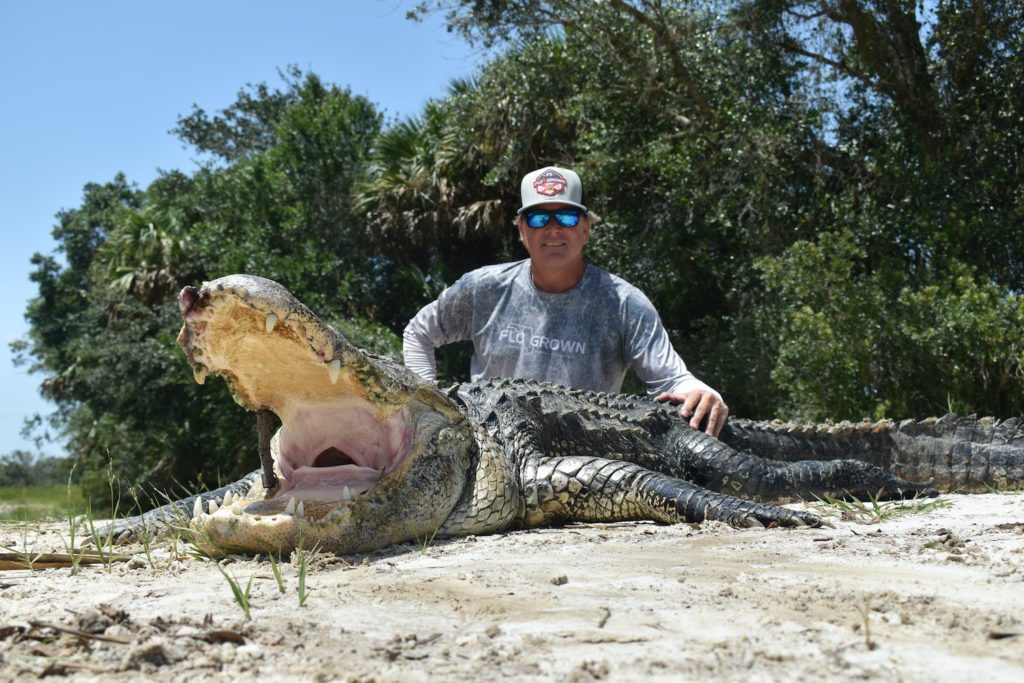 Alligator
After a short drive south from Headwaters, Bob and I arrived at the ranch to prepare for the alligator hunt. The FWC issues seasonal alligator hunting tags statewide but now also offers tags to land owners like the Hall family to allow guests to hunt alligator year round on private property. With close to 1000 acres of piney flatwoods and wet prairie bordering the vast 50,000 acres Kissimmee Prairie Preserve State Park, the wet terrain of the property creates the ideal habitat for finding a giant gator lurking in the marsh. In fact earlier this year a monster that was only one foot shy of the state record measuring over 13 feet and weighing over 900 pounds was shot just a few miles down the road from the ranch near the city of Okeechobee. https://www.miamiherald.com/news/local/article257882013.html
After a late lunch Bob and I strategized with Hunter on where to find the biggest gator on the property. “We have a lot of gators out here,” he explained, “And I know where at least two big ones hang out,” Armed with an offshore tuna rod and reel spooled with 200 pound braided line attached to a weighted treble hook and a scoped rifle, Bob and Hunter set off on foot towards a field of high grass on the north end of the ranch near several ponds teeming with alligators. “Not big enough.” whispered Hunter, as he and Bob crept towards the edge of the marsh to take a closer look at a lone eight footer that was sunning. Scanning the water from safely behind them I spotted about a dozen more swimming around. “Let’s keep moving,” whispered Hunter. After creeping a few more yards through the high grass he pointed to the wide head of a giant that quickly descended. Hunter hurriedly cast the treble hook across the residual bubbles emanating at the water’s surface and hooked into the big reptile before handing the reel to Bob. After half an hour of cranking and pulling on the rod which required all three of us to take turns on, the huge gator’s enormous head eventually emerged near the water’s surface allowing Bob a shot with the rifle that finally ended the battle.

After Hunter’s father Ian arrived with a tractor the four of us loaded the massive reptile into the excavator bucket. “Ten feet six inches,” said Ian, after measuring it from head to tail. After photos and a few refreshments the gator was taken south to Okeechobee to be processed, and in a few weeks Bob will have a few hundred pounds of sealed gator meat along with a ten foot tanned skin to commemorate the experience.

Headwaters Lake Public Boat Ramp Access
Located off Fellsmere Grade Road less than 10 miles west of Fellsmere, FL off I-95. Parking for around 44 trailers and restroom facilities are available. Additional parking available 2 miles away at the Stick Marsh/Farm 13 boat ramp. 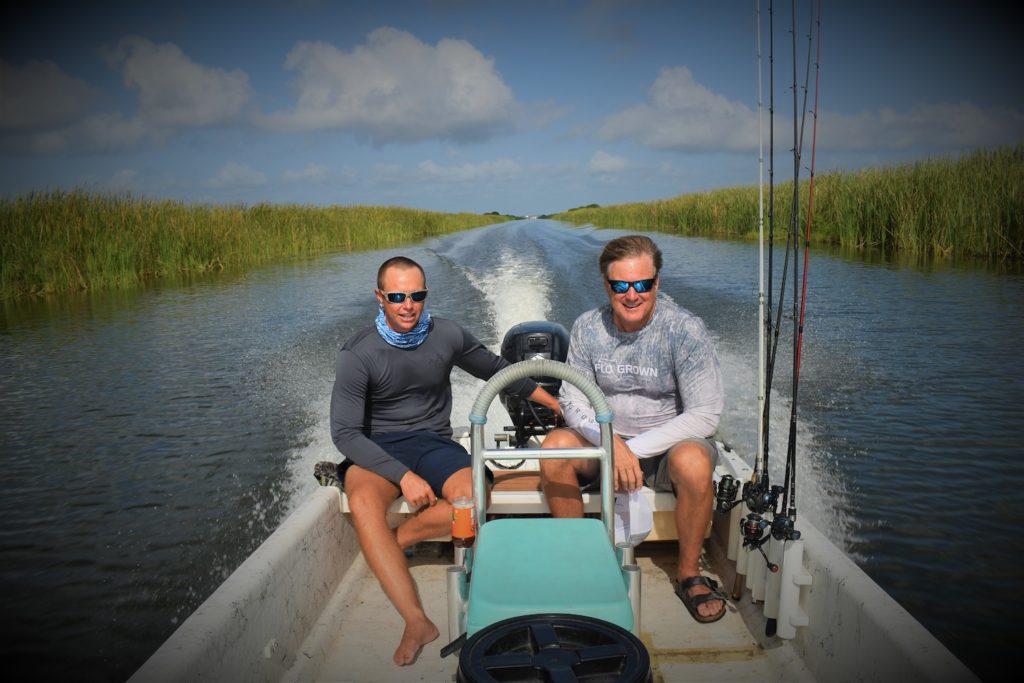