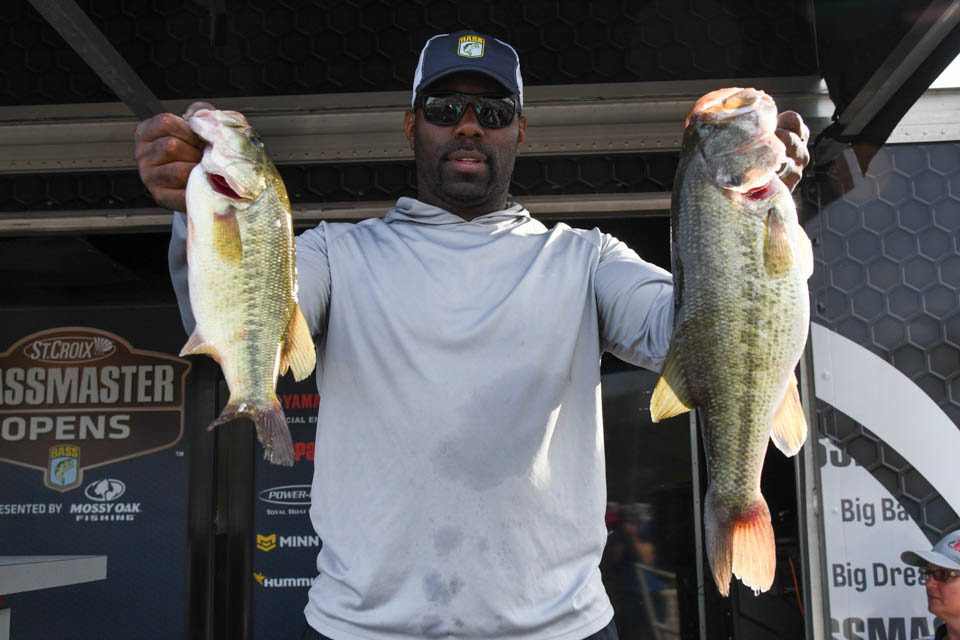 BIRMINGHAM, Ala. — As a kid growing up in Southern Ohio, Trent Cole Jr. and his siblings idolized legendary angler Jimmy Houston and imitated his techniques as they learned to fish for white bass and largemouth.

After spending 12 years playing in the NFL, the two-time All-Pro pass rusher for the Philadelphia Eagles and Indianapolis Colts is attempting to follow in Houston’s shoes by qualifying for the “Super Bowl of Bass Fishing” through the St. Croix Bassmaster Northern Opens presented by Mossy Oak Fishing.

Cole landed a limit on Day 1 of his first Northern Open of the season at the James River, but wasn’t able to find a consistent pattern on the second day and landed in 144th. It is all part of the learning process for him.

“I made some mistakes,” he said. “I got stubborn.”

Being an outdoorsman has always been part of Cole’s DNA — from hunting to fishing around reservoirs and farm ponds in Xenia, Ohio. During his NFL career, Cole was never able to jump into the tournament scene but was always watching and keeping track of the anglers he was familiar with in New Jersey like current Bassmaster Elite Series pros Mike Iaconelli and Greg DiPalma.

“You have to do your homework and put in the time. I have definitely become a better fisherman,” Cole said. “The way I approach the game is the same way I approach this fishing thing. Now, I have opponents and the biggest opponent is trying to catch one of those big ol’ bass.”

Playing football was second nature for Cole, who racked up 90.5 sacks during his career. In his next competitive career, he wants to develop the type of instincts his fishing idols compete with every day.

“The guys I’m fishing against are the guys I have watched,” he said. “It is like me being a pass rusher. I don’t think, I just do it. These guys out here, they know as soon as they see something it is a split-second decision on what to do. I’m trying to be better at another craft.”

The one major difference Cole noted in fishing is the individual nature of the sport.

“Only you can make the mistakes. It is all on you. I’m the type of guy where there is no room for mistakes,” he said. “I’m going to leave it all out on the water and do everything I have to do to be successful.”

Cole’s sole focus in the short term is to qualify for an Academy Sports + Outdoors Bassmaster Classic presented by Huk. He will have two more attempts to do so in the 2022 Northern Opens. Cole has experience at both fisheries left on the schedule and he hopes that experience will pay off.

“I fished these because the schedule fit me,” he said. “I know the Chesapeake and Oneida. I’m excited for the upcoming events.”

Cole will take to the water again July 7-9 at the Bassmaster Northern Open on Oneida Lake.