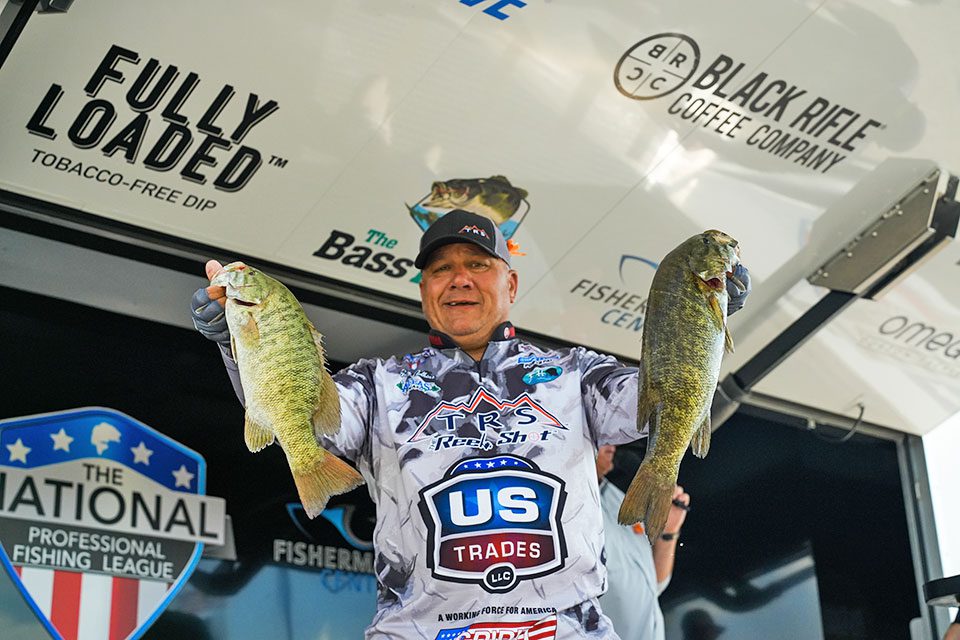 Adding 15-pounds, 10-ounces to his bag on day two, Gary Adkins finished the day in the lead with a two-day total of 35-pounds, 6-ounces. Adkins targeted smallmouth on day one and planned to return to his area on day two.

After a slow start and a bumpy ride, Adkins was able to capitalize on four bites in the first hour and had to move around a lot more to find fish on his primary area.

“It took a lot longer to get there today and they were still not positioned correctly for me to get the bigger bites. I upped the weight on my dropshot to ½-ounce to get better bottom contact and was able to scrape together the limit I weighed today.”

With a long day on the final day, he plans to make the trek out and settle in to try to get a big bag. With less wind, he is hopeful the bass will be set up better on the shoals.

Buck Mallory
Adding 18-pounds, 7-ounces to his day one weight of 16-pounds, 9-ounces, Buck Mallory finishes the day in 2nd place heading into the final day with a total weight of 35-pounds.

After planning to make a long run prior to practice, Mallory saw enough of the wind forecast and a lack of big bites and decided to stay in close to take off to target largemouth.

“Today was the same day as yesterday, I have been flipping, throwing a swim jig and chatterbait and I am fishing one particular area. I had a limit by 11:30am and just stuck it out in there the whole day. I am not fishing anything impressive and its straight forward – I am not going far from the ramp.

Kevin Martin
Adding 17-pounds, 7-ounces to this day one total of 16-pounds, 6-ounces, Kevin Martin is targeting all largemouth and finishes the day in the 3rd place spot with a two-day total of 33-pounds, 13-ounces. He is settling into an area in the river and not leaving.

“I am basically targeting grass and I caught my weight off my first spot with the exception of one upgrade later in the day. I have a lot of company and the plan is to do more of the same tomorrow.”

Martin believes the key to getting some of the bigger bites is his bait of choice and he plans to start his day the same place as today in hopes of catching another quality limit.

“I caught 20 to 25 keeper bass today and I got to the point that nothing was helping so I made a move and saved the area for tomorrow.”

John Soukup
With a two-day total of 33-pounds, 13-ounces, John Soukup finishes the day in the 4th place spot adding 16-pounds, 10-ounces on day two. Soukup targeted shallow largemouth on days one and two and has been mixing through several presentations.

“I am fishing for largemouth and have been fishing a swim jig, frogging, and a bit of punching. Lot of the bigger bass have come on the punch rig and one issue is I am working way back into the reed patches and the water is getting sucked out. It may be a problem for me tomorrow.”

Soukup is making a punch rig with an Alpha Angler Mag Hitter rod, a ¾-ounce weight and a Gene Larew Hoodaddy in watermelon red color.

Tim Wilson
Day one leader Tim Wilson brought 21-pounds, 14-ounces to the scales on day one and followed it up with a limit for 11-pounds, 9-ounces. With a two-day total of 33-pounds, 7-ounces, Wilson finished the day in the 5th place spot.

After taking the lead with smallmouth on day one, Wilson knew his area would be blown out and opted to fish for largemouth and started where he got his 5-pound bite the day before. He fished the area for an hour and with one small keeper to show for it, he moved to the west side of the lake and got to work.

“I ran 26 miles up and caught them on a swim jig but it took some time for me to get rolling. I fished with another angler in the area and he welcomed me into the spot and I got nine keepers in the next couple hours before making the trek back.”

Wilson is going for broke tomorrow and may give his smallmouth a chance in the morning depending on the weather. He is going to change up his approach and throw a few different baits to hopefully get a few bigger bites.