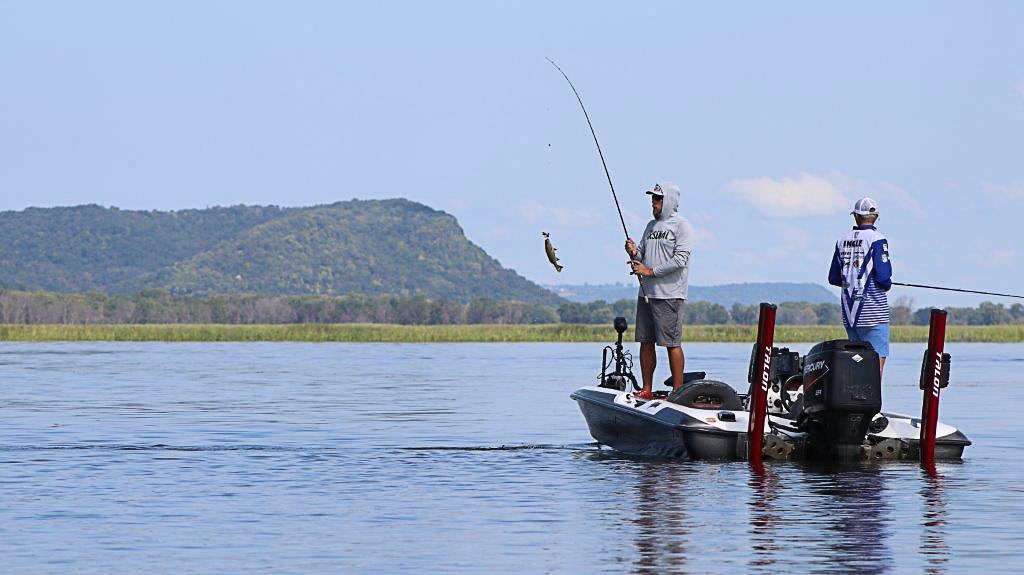 Clinton, Iowa — Anglers qualified for the 2022 TNT Fireworks B.A.S.S. Nation Northern Regional at Upper Mississippi River June 29-July 1 will tackle a new section of the river this time around, making for a unique tournament with a lot of question marks.

Fans have watched several Bassmaster Elite Series tournaments, as well as the 2021 B.A.S.S. Nation Northern Regional, launch out of La Crosse, Wis., and compete out of Pools 7, 8 and 9. This year, Nation anglers representing nine Northern states will launch out of Clinton, Iowa, and will have access to Pools 13, 14 and 15.

Even Bassmaster Elite Series rookie Jay Przekurat of Stevens Point, Wis., who has grown up on the more northern portions of the Upper Mississippi River, has not spent much time on these particular pools but knows it will set up similarly to the rest of the river system.

“A place like this hasn’t seen as much tournament pressure as La Crosse has seen,” Przekurat said. “I feel like you can find smaller areas that have more fish and you can probably have them more to yourself and they haven’t been beat up as much.”

When anglers arrive, Przekurat said the bass will likely be done with their spawning routine and moving toward their summer holes.

“That will be a postspawn period for sure and when all the vegetation will be growing to the highest point,” the Wisconsin native said. “Generally, in that later part of June, the water is a little higher. But it depends on what type of weather we are having. I would expect largemouth to play the most. The smallmouth tend to be bigger in the upper pools.”

The major difference, however, is Pools 13, 14 and 15 do not have expansive backwaters like the areas around La Crosse. The bass on the lower pools are more current-oriented, and that causes them to group up more around various current breaks.

“Pools 7 and 8 have so many more backwaters and the lower pools are more of a straight river with smaller backwaters,” Przekurat said.

Cut banks, sand drops and isolated targets like wood and laydowns will be important players, and Pzrekurat added that there aren’t as many hard bottom areas in the lower pools.

Anglers will launch from Clinton Marina starting at 5:30 a.m. CT and will return for weigh-in beginning at 2 p.m. This is the final Nation Regional for the 2022 season, and the top boater and nonboater from each state at the end of the tournament will advance to the TNT Fireworks B.A.S.S. Nation Championship, which will be held Nov. 9-11 on Pickwick Lake.

The tournament is being sponsored by the Clinton, Iowa Convention & Visitors Bureau.