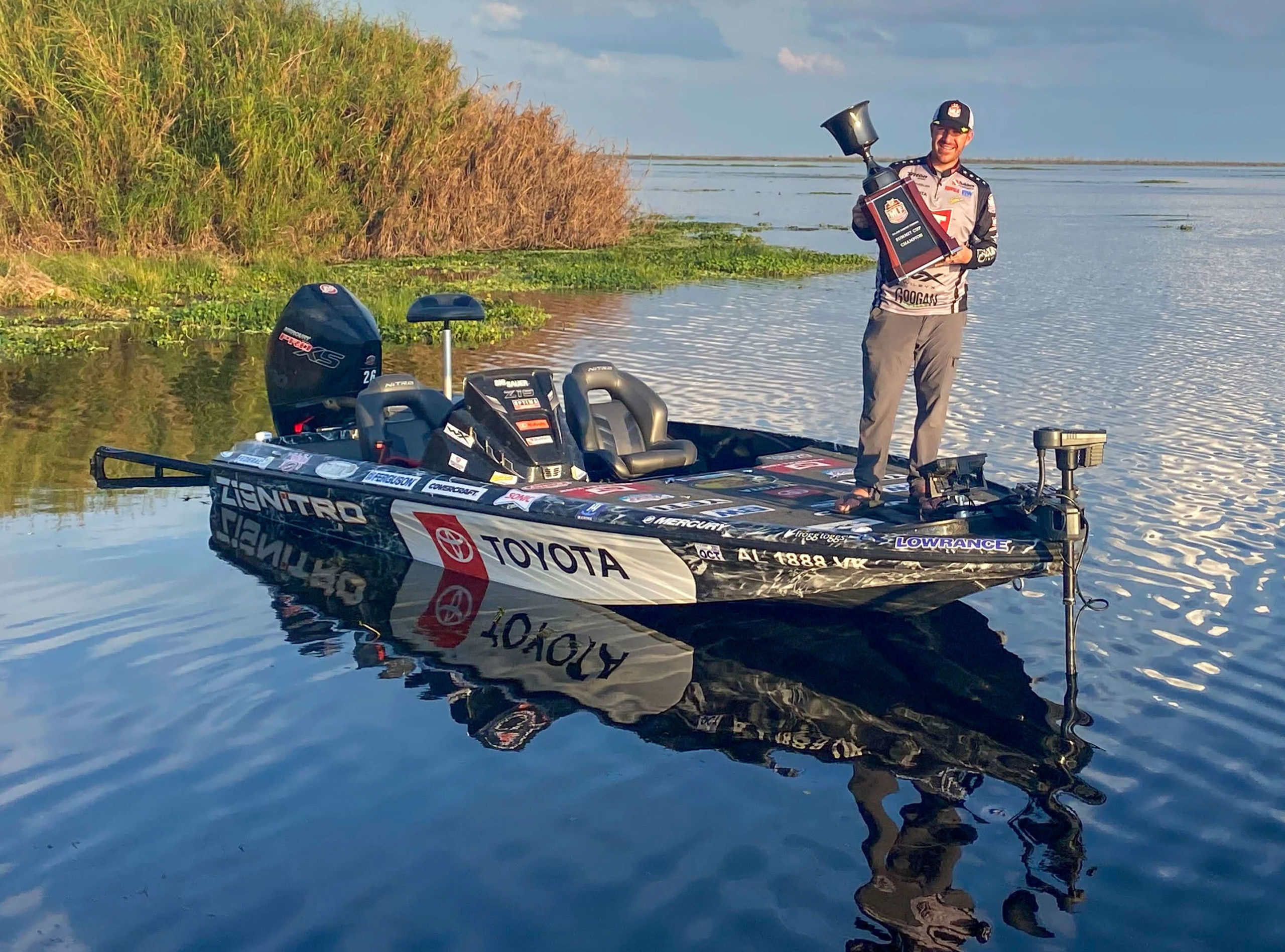 The victory did not come easy for Wheeler. He and Shelby, North Carolina, pro Bryan Thrift traded the lead back and forth throughout most of the day. Thrift held the lead to start Period 2, but Wheeler rocketed to the top of the leaderboard with a 6-pound, 2-ounce giant and built a commanding 14-pound lead over Thrift and the rest of the pack in the second period.

But Thrift battled back, catching five scorable bass in a row – including two 4-pounders – to retake the lead from the Tennessee pro. Midway through the third period, Thrift caught a 3-pound, 3-ounce bass that pushed his lead over Wheeler to 4 pounds, 9 ounces and it looked like the story was already being written.

The two traded scorable keepers back and forth, and as the clock clicked down to the end of competition it looked as if Thrift had the win in the bag. With just three minutes remaining, Thrift had a 1-pound, 11-ounce lead over Wheeler and looked to be on his way to claiming his first career MLF Cup victory. Wheeler, however, had other ideas.

Wheeler hooked up with just two minutes remaining in competition – the fish weighed 2 pounds, 1 ounce. Wheeler had overtaken Thrift by 6 ounces, and as time ticked down, he was giddy as he knew he had earned the win over the North Carolina pro in a thrilling finale.

“Oh my gosh, you have got to be freaking kidding me,” Wheeler said as time expired. “I was running around like a mad man those last few minutes. Where I caught that last fish – that was the zone that I had already milked today, really hard. I went through there and had missed two good ones – I had lost a good one at the beginning of the third period. I was running the lake and I shut down there and had 9½ minutes to fish. I told myself I was going to hit every hyacinth mat in there, and if we got a bite, hopefully it was enough. And it happened.”

Wheeler flipped and punched heavy creature baits to win the event. He threw an unnamed soft plastic craw with a heavy 2-ounce tungsten weight and a 4/0 punching hook.

“In Florida, it’s tough because if you fish too fast, you pass them. But if you fish too slow, you don’t catch enough fish to win,” Wheeler said. “I just kept hearing Thrift – ding, ding, ding, the SCORETRACKER® was going off and I knew I had to make an adjustment.

“I can’t believe it happened,” Wheeler went on to say. “What an incredible way to end the season. I only fished one Cup event this year – to come down to Florida and hoist the trophy… wow. This is so surreal – it’s so much fun to be able to do something that I absolutely love to do.”

Complete results along with photos from the event can be found at MajorLeagueFishing.com.

Overall, there were 104 bass weighing 225 pounds, 11 ounces caught by the final eight pros during the Championship Round of competition on Kenansville Lake.

The 2022 Wiley X Summit Cup Presented by B&W Trailer Hitches was hosted by hosted by Florida’s Space Coast Office of Tourism and premiered on the Outdoor Channel as six, two-hour original episodes each Saturday afternoon debuting on May 21, 2022, and running through June 25, 2022.

The event was shot over six days in December on lakes surrounding the Palm Bay area and featured 24 MLF pro anglers visiting the Space Coast of Florida to compete on either Headwaters Lake, Kenansville Lake, Garcia Reservoir or Stick Marsh on each day of competition. The fisheries were unknown to the anglers – they did not learn where they were competing until they arrived to the launch ramp each morning of competition.

All six episodes of the event are now available for viewing on the MyOutdoorTV (MOTV) streaming app. The full television schedule can be found at MajorLeagueFishing.com.