ATHENS, Ala. – Jonathan Pelfrey of Rockwood TN, won the Bass Pro Shops Open Series event held on Douglas Lake on 6/8/19. Running out of Dandridge Public dock in Dandridge, TN Pelfrey weighed in a five bass limit weighing 12.46 pounds.  He took home a check for $1400.00 for the win.

In second place for the boaters Bobby Tadlock of Clinton, TN weighed in a five bass limit weighing 12.26 pounds. His limit was anchored by a bass weighing 4.22 pounds.

“I was all over the place,” said Tadlock. “I was fishing anywhere from 5 to 20 feet. I’d run in and catch some on topwater then move out catching them on a 6XD and a Carolina rig. Thanks to Mercury motors, Ranger boats and Carlise tires.”

Taking third for the boaters Jeff Knight of Cleveland, TN weighed in a five bass limit weighing 12.01 pounds. His limit was anchored by a bass weighing 4.32 pounds which was the largest bass weighed in by a boater. Knight took home $720.00 for the effort.

“I flipped shallow all day,” said Knight. “I was flipping and kicking up mud with my trolling motor and I flipped in and saw the mud boil and I caught my biggest fish.”

In fourth place for the boaters Eddie Ball of Newport TN, weighed in a five bass limit weighing 11.04 pounds. Rounding out the top five, Brian Hatfield of Spring City, TN weighed in five bass for 10.21 pounds. 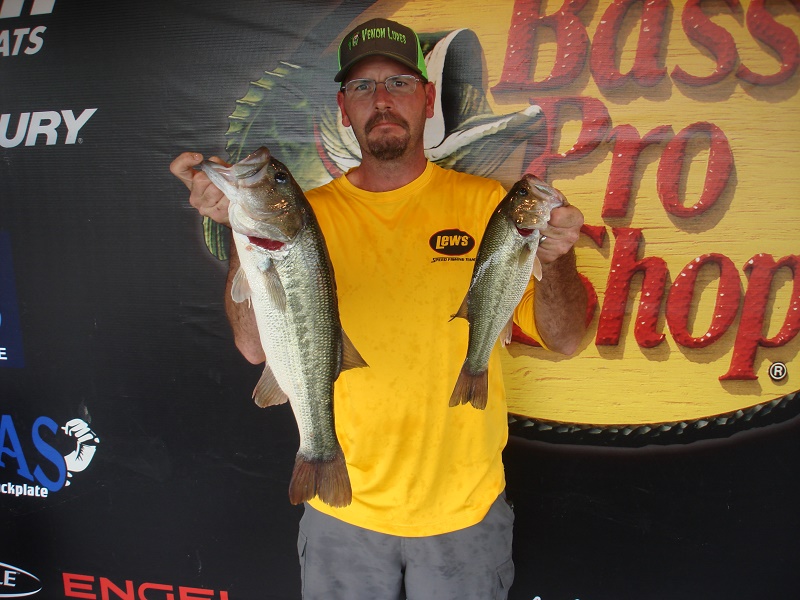 In the co-angler division Joseph Yocum of Strawberry Plains TN, weighed in three bass that weighed 7.02 pounds. His catch was anchored by a bass weighing 4.23 pounds which was the biggest bass weighed in by a co-angler. Yocum collected $780.00 for his catch.

“I was flipping a jig in 4-8 foot,” said Yocum. “There was just no size to the fish I was catching. I caught my big fish in the last 30 minutes.”

In second place for the co-anglers Jerry Neuner of Rutherfordton, NC weighed in three bass for 6.91 pounds. His limit was anchored by a bass weighing 3.83 pounds.

“I had my limit by 6:45 this morning on a dropshot in 19 foot of water,” said Cruver. “I also caught some fish on a Carolina rig in about 6 foot. We caught all our fish from the same spot.”

The next event for the East Tennessee division will be held on 7/13/19 on Watts Bar lake launching from Tom Fuller Park in Rockwood TN.