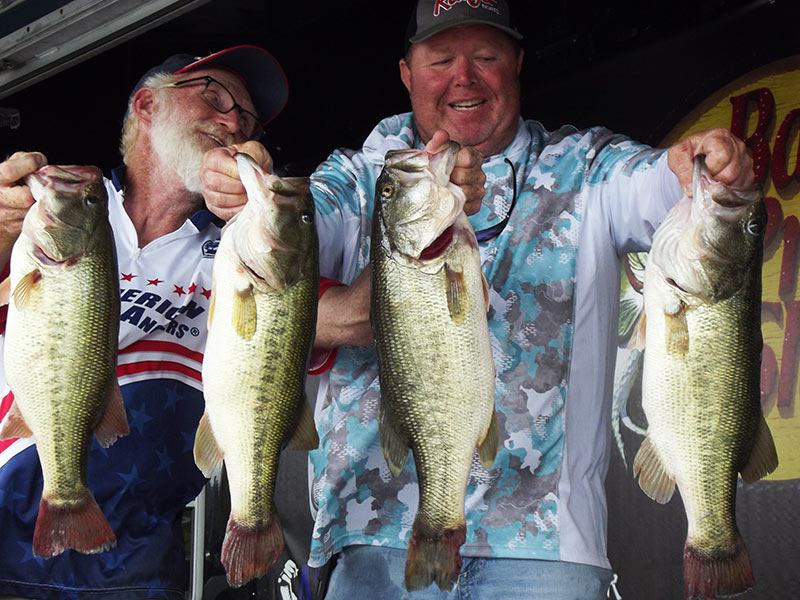 The Randolph, Ala. angler did it by catching the second heaviest bag of the tournament. Pulling in five bass for 29.55 pounds on the second and last day of the final event in the ABA Top 150 Solo Series inaugural season, Mims won with a 45.17-pound total.

“I was fishing the mid-lake area around submerged hydrilla in water about six to eight feet deep,” the newly crowned champion revealed. “I was slow dragging a Texas-style Senko in green pumpkin with a watermelon stripe.”

Mims held 12th place on Day 1 of the two-day event with a five-bass daily tournament limit weighing 15.62 pounds. He capped that catch with a 7.84-pound kicker. On the second day, he returned to that spot and caught another five-bass limit anchored by his biggest fish of the tournament at 7.90 pounds.

“On the final day, I caught that big bass in the same spot where I caught that 7.84-pounder the day before,” Mims commented. “I caught two six-pounders on consecutive casts. I caught five good fish off that hole, but they quit biting at 8:30 a.m. I was able to cull a 3.15-pounder later in the day.”

Mims will join the other 2021 ABA Top 150 Solo Series divisional winners plus the Southeast and Southwest Division Anglers of the Year at the 2022 Ray Scott Championship. In other Southeast Division events, Shane Powell of Dothan, Ala. qualified by winning at Lake Eufaula, Ala. in February and Jesse Wise of Erwin, N.C. won at Lake Guntersville near Scottsboro, Ala. in May.

In the Southwest Division, Cody Pitt from Hineston, La. won at Toledo Bend Reservoir near Many, La. in February. Zach A. Clark of Center, Texas, won two events, one held in March at Lake Sam Rayburn near Zavalla, Texas, and another at Lake Eufaula near Eufaula, Okla. in May.

Day 1 leader on Lake Chickamauga, Jonathan “Dale” Pelfrey of Rockwood, Tenn. dropped a notch. After catching the largest sack of the tournament on Day 1 at 31.36 pounds, he brought in 12.66 pounds on the second day to finish a little over a pound behind Mims with 10 bass weighing 44.02 pounds.

“In practice, I graphed some holes with good fish,” Pelfrey advised. “On the first morning, I pulled up to one hole, and saw two really big ones and some other good fish. I caught two nine-pounders on back-to-back casts. I caught seven keepers off that one hole on the first day and left. I caught more fish on several holes the first day. I’d catch one fish and leave it for the second day because I already had a good sack.”

On the first day, Pelfrey caught his biggest bass of the tournament at 9.52-pounds to give him the big sack. His first three fish of the morning weighed more than 21 pounds. He caught most of his fish on ledges by dragging baits and throwing a Strike King 10XD crankbait.

“Unfortunately, it just didn’t work out for me on the second day,” Pelfrey lamented. “I just couldn’t get on a lot of stuff. I caught two of my keepers on a Ned rig and others on a football jig, a worm and a big plug, but I caught most of my fish on a worm.”

Sometimes called the Midwest Finesse Bait, a Ned rig consists of a light jighead with a four- to five-inch plastic stick trailer. With the light jighead, bass anglers can fish it like a wacky worm, just letting it fall as it glides from side to side. Fish it on a slack line and watch for the line to move in an odd direction. Also, crawl it along the bottom around stumps and other cover.

Jeff Knight of Cleveland, Tenn. also dropped one place from Day 1 to finish third among the 90 competitors. He ended with a two-day limit of 10 bass going 43.30 pounds. On the first day, Knight held second with 24.68 pounds. That bag included a 9.90-pounder, the tournament lunker. For the big bass, Knight pocketed a $1,000 bonus.

“A 7:15 a.m. on the first morning, I pulled up to a hump that I had found in a previous tournament and immediately caught a two-pounder,” Knight reported. “A couple casts later, I caught the tournament lunker. On my next cast, I caught a 6.5-pounder and had a limit by 7:30 a.m.”

On the final day, Knight caught a five-bass daily limit weighing 18.62 pounds. He lost a good fish that hurt him in the standings.

“I caught all my bass, including in practice, by fishing ledges with a 3/4-ounce football jig,” Knight said. “I lost about an eight-pounder on a worm on the final day. That cost me the tournament, but third place is better than nothing. I had fun. It was a good tournament.”

Also making a giant leap, Johnathan “Wellman” L. Robeson of Tarheel, N.C., held 22nd place after Day 1 with a five-bass daily tournament limit going 13.88 pounds. He persistently fished the same spot for two days. With only four bass, including a 7.34-pounder, he landed the second largest Day 2 sack weighing 23.48 pounds. That moved him up 18 slots to finish fourth with 37.36 pounds.

“Coming to this tournament, I knew it was going to be tough for me because I don’t have a lot of offshore experience,” Robeson explained. “I followed the creek channels off the main river with my Navionics mapping card. I found a treetop in a bend that was in five to eight feet of water. I caught the fish I weighed on a 1/2-ounce jig. I fished that same tree for two days.”

Jim M. Leary from Guntersville, Ala., wrapped up the Top 5 anglers in the last tournament of the first season for the ABA Top 150 Solo Series. He held third place on Day 1 with five bass and 23.41 pounds. He capped the catch with a 7.54-pound kicker. On the second day, he caught 13.79 pounds. He dropped two places to finish fifth with 10 bass at 37.20 pounds.

“I came up to the lake with the mindset that I was going to stay offshore,” Leary said. “I caught just about everything on a 4×4 football jig with a NetBait Paca Slim trailer. At 11 a.m. on the first day, I already had a limit in the boat. I pulled up to another spot and threw out the jig. I culled four times in five casts with that football jig. I caught the 7.54-pounder, a five-pounder and two four-pounders. On the second day, the only way I could catch fish was with a Ned rig. I lost two good fish.”

Already qualified to fish the 2022 Ray Scott Championship because of his win on Lake Guntersville in the second Southeast Division event, Jesse Wise held eighth place throughout the tournament. He finished with 10 bass for 33.90 pounds after landing 17.59 pounds on Day 1 and 16.31 pounds the final day.

Bradley G. Gardner of Molena, Ga. finished ninth with 10 bass weighing 33.62 pounds. He held seventh place on Day 1 with 18.38 pounds and brought in another 15.24 pounds on the final day.

Rounding out the Top 10 finishers, David Parsons of Dothan, Ala. caught a 10-bass two-day limit good for 32.67 pounds. On the first day, he sat in 14th place with 15.31 pounds. He moved up four spots on the final day with a 17.36-pound catch to conclude the ABA Top 150 Solo Series inaugural season.