The Most Versatile Rattlebait Ever?

Niagara-on-the-Lake, ON (April 24, 2019) – Veteran freshwater anglers know how important it is to keep quiet on the approach. Bang a tackle box against the gunwale, drag a cooler across the deck or wade a little too forcefully and predator species instantly scatter. Get the right sounds working below the surface, however, and you can really light up the bite, which is why lipless rattlebaits continue to attract a growing legion of fans.

Most rattlebaits have a lot going for them right from the start. In addition to all that fish-attracting subsurface noise, game fish can feel the vibrations these lures produce from a significant distance and home in on the target. The flash and wiggle as they rip through the water can also be a head turner since the basic shape of most models mimic baitfish species of various sizes. As a genre, rattlebaits also lend themselves well to a variety of retrieves. 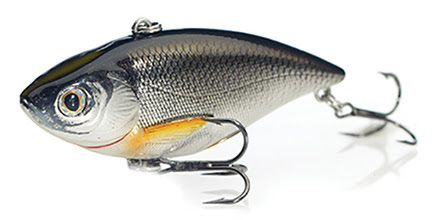 Still, most anglers would rather have a little more than a little less when it comes to fish-catching potential and design. That makes the LIVETARGET® Golden Shiner Rattlebait worth serious consideration when laying out your heavy hitter arsenal. Wide at the shoulders and deep through the body, these multi-species baits sport a super-detailed profile to augment a perfectly pitched harmonic rattle. Already recognized as one of the most versatile lipless hardbaits ever created for largemouths, bronzebacks and spotted bass, Golden Shiner Rattlebaits are just as likely to tempt landlocked stripers, walleye, trout, pike and slab-sized panfish.

Of course, first impressions are important when it comes to crossing paths with pressured lunkers, but it’s the fine details that make a rattlebait great. Check out these lures and you’ll see plenty of technological innovation rolled into a remarkably lifelike and compact package. For starters, they are internally weighted, exceptionally balanced and brandish a pair of super-sharp premium Daiichi® hooks. Hold a LIVETARGET® Golden Shiner Rattlebait in your palm and you’ll notice it feels slightly denser than other rattlebaits of similar size. That little bit of extra weight allows smaller sizes to cast farther, reach greater depths and fall with a tantalizing, medium-speed sink rate that’s simply irresistible. Cast one out and watch it fly across the water. Reel it in and feel the tight wiggle and strong vibrations that closely match the real McCoy.

Getting back to that lifelike finish, the LIVETARGET® Golden Shiner Rattlebait series is designed to perfectly mimic young golden shiners as you might expect, but it also matches up well with juvenile shad and other baitfish species. Hold one up for close inspection and you’ll notice three-dimensional scales, fins, gill slits and lively eyes. As for versatility, try a broken retrieve around structure for black bass or troll across open water with your kayak or electric motor to locate schools of landlocked stripers. Vertical jigging works well when your targets are tightly schooled, especially if these lures are allowed to fall on completely slack lines. You can also rip them along weed edges, or use a “retrieve and drop” approach. It’s all good.

With nine natural-looking color patterns and three sizes to choose from, there’s plenty of opportunity to match the hatch or most any specific fishing situation. The brand new 2” (¼ oz.) size provides an edge in clear water and early spring when temperatures are still on the cool side. It’s also effective throughout the summer whenever predators key on small baitfish. The larger 2 3/8” (1/4 oz.) or 2 7/8” (1/2 oz.) sizes pick up steam as waters warm and target species grow increasingly more aggressive.

Interestingly, some anglers are also using these lures straight through the winter for ice-fishing, both as a primary point of attack and to draw fish from surrounding waters directly beneath their holes with the combination of that tight rattling sound and sharp vibrations from rapid twitches. Walleye and jumbo yellow perch respond particularly well when several anglers work LIVETARGET® Golden Shiner Rattlebaits simultaneously using sharp, 1-foot snaps of the rod. Tip the front hook with half a shiner and there’s no telling what you might haul through the ice. Catch the action on an Aqua-Vu underwater fishing camera for even more fun and thrills.

One overlooked but important aspect of these super versatile lures is their cast-ability. Perfectly balanced, they fire straight and true with rarely a tangle so you can reach out to the fish without risk of spooking skittish schools or busting up the baitfish pods. That extra distance can be a real deal-maker around surfacing bass in open water, or when casting for early spring walleye and stripers in the flows below a dam following winter shad kills. In both instances, a pop ‘n drop approach can lead to savage strikes and big innings.

In terms of rigging these super lipless rattlebaits, a 6’10” to 7’2” medium action St. Croix Legend Glass series casting or spinning rod is ideal for most applications. Pair that with a 6:1 gear ratio reel and 15-lb test Seaguar Smackdown fluorocarbon line because it’s tough, has a thin diameter for ultimate casting distance, and digs deep on the troll or retrieve. For a leader, run an 18-inch section of 15- to 20-lb. test Seaguar Tatsu™ fluorocarbon directly to the lure. Buy a spool to use strictly as leader material and it can last for years.

With LIVETARGET®’s focus on lifelike patterns, there aren’t any flashy fire tiger or bright red options in the Golden Shiner Rattlebait line-up. Then again, the natural shades and soft glow selections have been covering all the bases – and all the “basses” – so there seems little reason to mess with success

One of the Best Pond Bass Fishing Baits Out There!! Grae Buck