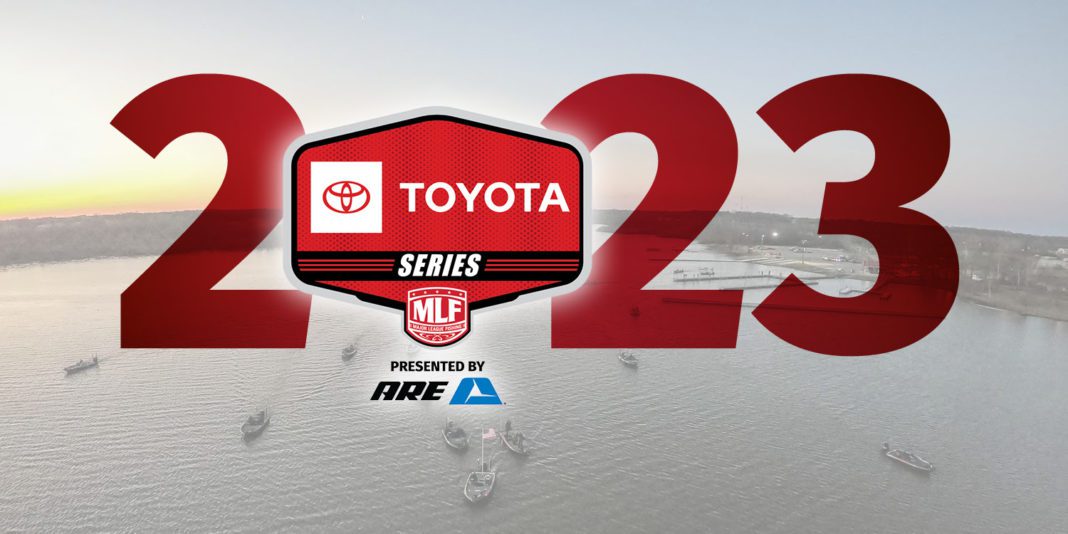 TULSA, Okla. (September 22, 2022)  – Major League Fishing (MLF), the world’s largest tournament-fishing organization, announced Thursday details for the 2023 Toyota Series Presented by A.R.E., which kicks off its regular season in late-January at Sam Rayburn Reservoir in Brookeland, Texas, and runs through late-September when it wraps up at the Lake of the Ozarks in Osage Beach, Missouri.

Offering the biggest payouts for the lowest entry fees of any national tournament trail, the Toyota Series Presented by A.R.E. gives anglers the opportunity to fish close to home for incredible awards and advancement to the nationally televised Toyota Series Championship where pros compete for up to $235,000, including a $35,000 Phoenix MLF Bonus, and co-anglers compete for a $33,500 Phoenix 518 Pro bass boat powered by a 115 HP Mercury.

New in 2023, the winning pro at the Toyota Series Championship will also qualify for REDCREST 2024 – the Bass Pro Tour Championship – for the chance to win $300,000.

“We are extremely excited about the lineup of fisheries for the 2023 season and thrilled to offer Toyota Series anglers the opportunity for advancement to REDCREST 2024,” said Mark McWha, Toyota Series Tournament Director. “New opportunities in the Wild Card division and the ‘win-and-you’re-in’ format guarantee that anglers are never out of contention to qualify for the Toyota Series Championship where pros only have to beat 27 anglers from their home division to win $10,000. That’s an incredible opportunity.”

The 2023 Toyota Series Championship will be hosted by ExploreBranson.com, November 2-4, at Table Rock Lake in Branson, Missouri. The championship field will feature the top 25 pros and co-anglers from each of the six U.S. Toyota Series divisions and the Wild Card division (up from 12 Wild Card division anglers in 2022) plus tournament winners; the highest finishing boater and co-angler from each of the six Phoenix Bass Fishing League Presented by T-H Marine Regionals and the TBF from the All-American; the top three teams from the College Fishing National Championship; the High School Fishing National Champions; the TBF National Champions; and up to two pros from each MLF International country.

“We are excited to host the Toyota Series Championship for Major League Fishing next fall in Branson,” said Jason Outman, President and CEO of the Branson/Lakes Area Chamber of Commerce and Convention & Visitors Bureau. “We look forward to following all of the anglers who will bring the high-intensity sport of competitive bass fishing to Table Rock Lake and look forward to welcoming their families and fans who will be here, too.”

Every Toyota Series tournament features live weigh-in coverage and the Toyota Series Championship will be televised on CBS Sports.

The top five pros from each U.S. division in Angler of the Year standings qualify for the new MLF Invitationals. If a top-five pro declines his or her bid or earns qualification through the Invitationals or Bass Pro Tour, the next eligible pro qualifies. This process continues through the top 10 pros in each division.

“We are proud to provide anglers from coast to coast with opportunities to fish for incredible awards on their favorite fisheries while advancing to the sport’s highest level,” said Alan Gray, Toyota Series Western Division Tournament Director. “Some of the best anglers in the world compete in our Western Division, and I look forward to working with them to showcase their talents.”

The highest-finishing pro from each division, now including the Wild Card division, at the Toyota Series Championship receives a $10,000 bonus. The Anglers of the Year and Strike King Co-anglers of the Year will also be awarded $5,000 and $2,000, respectively, in each of the six U.S. divisions.

Anglers automatically qualify for Wild Card division advancement and bonuses by fishing four or more tournaments in any combination of divisions and keeping their three highest finishes.

The complete 2023 Toyota Series Presented by A.R.E. schedule, rules and payouts are available online at MajorLeagueFishing.com.