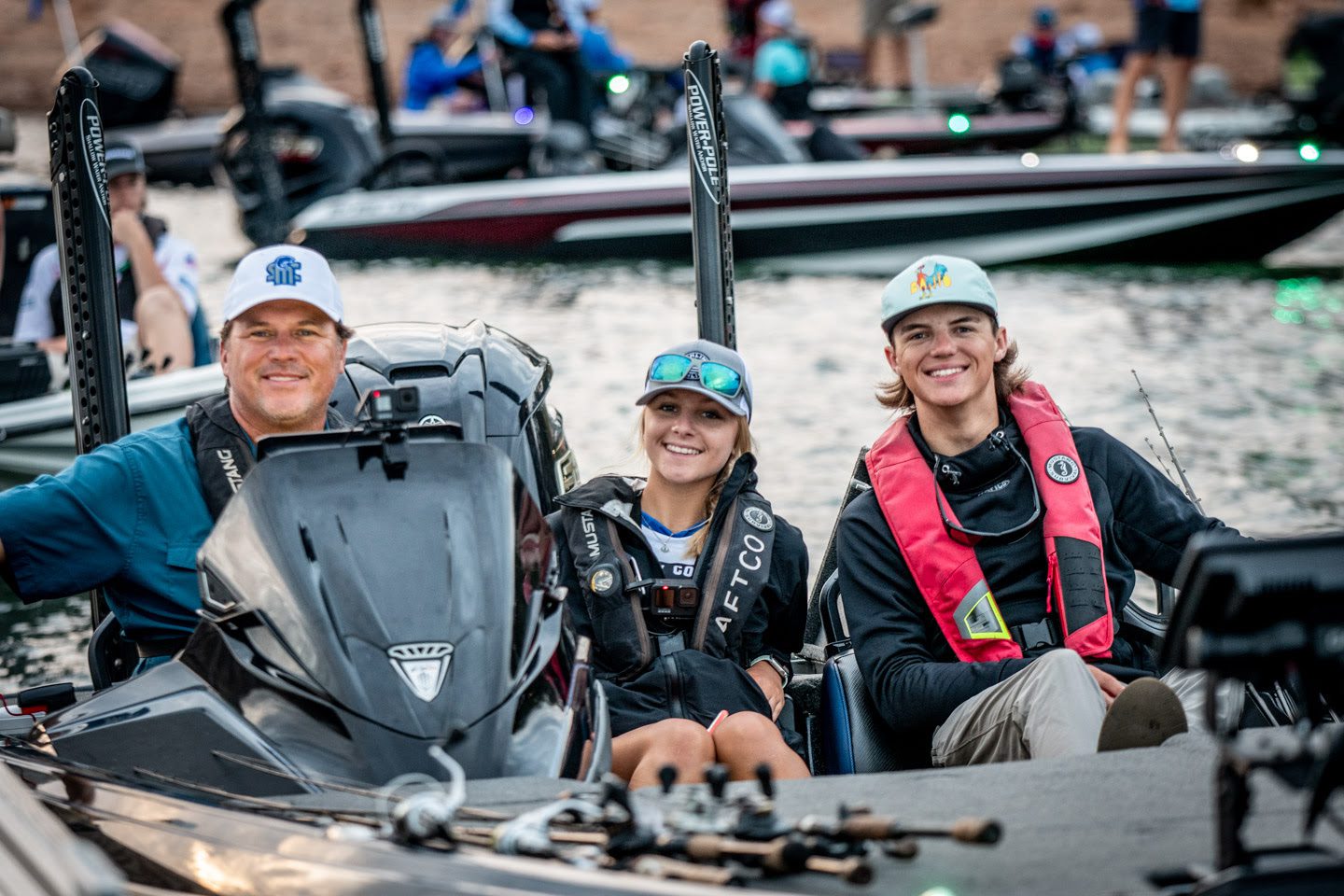 This week, he is the boat captain for his daughter Hilary and her fishing partner Rafe Sexton at the Abu Garcia Bassmaster High School Championship presented by Academy Sports + Outdoors on Lake Hartwell.

“How awesome is it for me to be able to enjoy this with my daughter? Her first year fishing, she qualified for the National Championship. It is a blessing,” Scott Martin said.

Representing Hendry County Bass Masters, Hilary and Sexton entered Day 2 in 31st after catching 11 pounds, 11 ounces. While that is below their personal expectations, Hilary Martin said that they can make a major move up the leaderboard.

“It is pretty tough,” Hilary said. “I haven’t met my expectations just yet, but hopefully tomorrow, if the sun peaks up a little, we might move into some shallower areas and hopefully get those big fish to bite. We are looking for a 17-pound bag tomorrow, and that would be awesome.”

As merely a boat driver and observer this week, the Florida pro has been anxiously watching the two young anglers’ every move. With his graphs turned on in the driver seat, he has been able to watch and see how many fish they are actually around.

“On a normal lake, you don’t know when a bite is going to happen. But here we are using the sonar and if we are shallow we can see them swimming,” Scott said. “They throw out on these schools of fish and I can see them on the graph swim up to the bait and (I get excited). This is my first year doing this. Before the first event, I thought I was going to be bored, taking a nap or on my phone, but I have watched every single cast and every rod movement. I critique them throughout the day and plant seeds on how to be effective. I love this.”

The fishing lineage of the Martin family has been well documented, from Roland Martin dominating the tournament scene in the 70s and 80s to Scott becoming one of the most dominant anglers in FLW history before joining the Elite Series in 2021.

Now it is Hilary’s turn.

She has spent plenty of time in the boat with her father while also establishing her presence on social media, YouTube and making appearances on The Scott Martin Challenge television show from time to time, but this year is the first year she has jumped into the tournament scene full time.

“Now that I’m fishing hardcore kind of like him, I have grown a new respect for how hard these fisherman work just to get one bite,” she said. “It can be really tough some days and especially in tournaments like this, it takes a lot of mental game and effort. I have a whole new respect for my grandpa and my dad fishing like this.”

Years of tournament experience are now being funneled to Hilary and she is soaking up as much as possible.

“It has been awesome. My dad has been fishing since he was my age. He knows a lot and retaining information like that is very valuable to me,” she explained. “We butt heads because we are related, but it is good to have him on the boat as my support system. He talks me through everything I’m doing. It is a great time.”

Sexton, meanwhile, has been fishing for several years through the Florida B.A.S.S. Nation in the youth division as well as the adult division. While they have known each other for a while, this is the first year Sexton and Hilary have fished together full time. After navigating the Florida Nation schedule, with up to 140 boats in each tournament, the duo finished fifth in the state championship event and qualified for the National Championship.

Through the Nation schedule, Sexton and Hilary agree that they have been able to improve their offshore game.

“I’m a shallow water guy. Growing up on Okeechobee, I throw a popping frog a lot,” Sexton said. “Through the B.A.S.S. Nation, I have adapted my offshore game. When we travel to lakes like the Harris Chain or Seminole, we have to expand on more than our shallow water game. It has sharpened my edges and especially coming to Nationals, you get to see different angles and see how to fish different fisheries.”

This year has been largely about getting comfortable in a tournament setting and finding consistency, but going into both Hilary and Sexton’s senior year, the focus will shift slightly.

“Not to say we haven’t tried to win a tournament, but we really wanted to be consistent. It’s a process,” Scott said. “Next year we will push a lot harder to try and pull off a victory. We came close a few times this year.”

Regardless of how this National Championship turns out, Scott has been impressed with the caliber of angler that they are competing against this week.

“We fished the entire B.A.S.S. Nation in Florida and now to see 300 boats here,” Scott said. “They are the cream of the crop of high school anglers. They are all professional and well-spoken. Bassmaster is breeding up a world-class group of anglers. It is so encouraging. When I was growing up, we didn’t have these opportunities. I’m really proud to see what B.A.S.S. is doing and I’m proud of the parents supporting their kids in this.”

The Top 12 teams after Friday’s weigh-in will advance to Championship Saturday.

The tournament is being hosted by Visit Anderson.