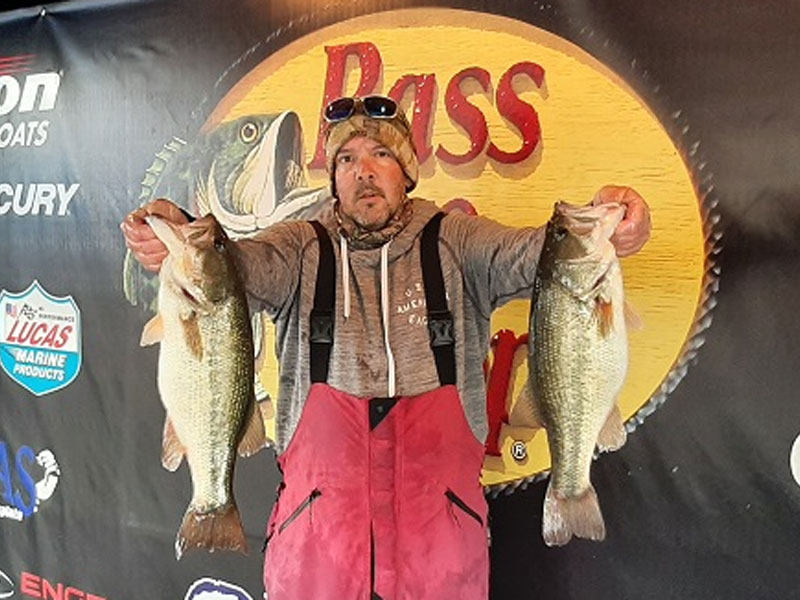 ATHENS, Al. –Anthony W. Nash of Quebeck, TN won the opening event in the Tennessee Central Division of the Bass Pro Shop Open Series March 13th on Center Hill Lake.  Launching out of Ragland Bottom in Sparta, Tenn. Anthony Nash weighed in a limit for 23.71lbs to secure first place on the boater side.  “I caught my fish on a football jig, and a jerk bait catching them suspended in about 10 foot of water,” said Nash. “The bite was very good till about noon but after that it went downhill.”

Tim Staley of Dowelltown TN just missed first place by .37lbs to take second place with 5 fish bass weighing 23.34lbs which included a 7.37lb event big bass.  “I caught all my fish with ½ ounce football jig in about 15 to 18 foot of water. I caught all my fish by 7:30 this morning.  I found them during practice the day before, I was luckily they were still there” Staley said.

Third place 3rd place on the boater side was Jay Melton of Murfreesboro Tn. bringing in a limit for 18.01 pounds.  “I caught all my fish on a Carolina Rig and a Spinnerbait.  Using the spinnerbait early I caught them shallow, then they moved later in the day and caught them suspended on a Carolina rig” Melton said.

Rounding out the top five was Tim Messer of Hendersonville TN in fourth place with a limit weighing 17.75lbs and fifth place went to Eric Silverstrim of Indian Mound TN with 14.71 lbs.

In the Co-Angler Division Kevin Jones Jr. of Fort Campbell Ky, took first place payday with 10.42lbs including the co- angler big fish 5.73lbs.  “I caught all my fish on a Brain Thrift micro jig and a Strike King rock crawler crank bait.  All of them came from around rocks in about 10 to 15 foot” said Jones.

Second place Co-Angler was Christopher Benninger of Murfreesboro Tn. with 3 fish for 9.88lbs.

Rounding out the top five in the Co-Angler division was Blake Whittaker of Irmo SC with 9.33lbs and fourth place went to Roy Yother of Red Bank TN had 3 fish for 9.17lbs.  Sliding in to fifth place was Ethan Hall of Sparta Hall TN with 9.11lbs

The next stop in the Central Tennessee Open Series division is April 24th on Old Hickory Lake at the Flippers Bait and Tackle.  At the end of the season, the best anglers from across the nation advance the 2022 Ray Scott Championship to be held at Lake Eufaula in April, 2022.