The Bass Cast
Home Contributes Ben Hudson Q&A sessions: Ben Hudson brings us an exciting Q&A with one of... 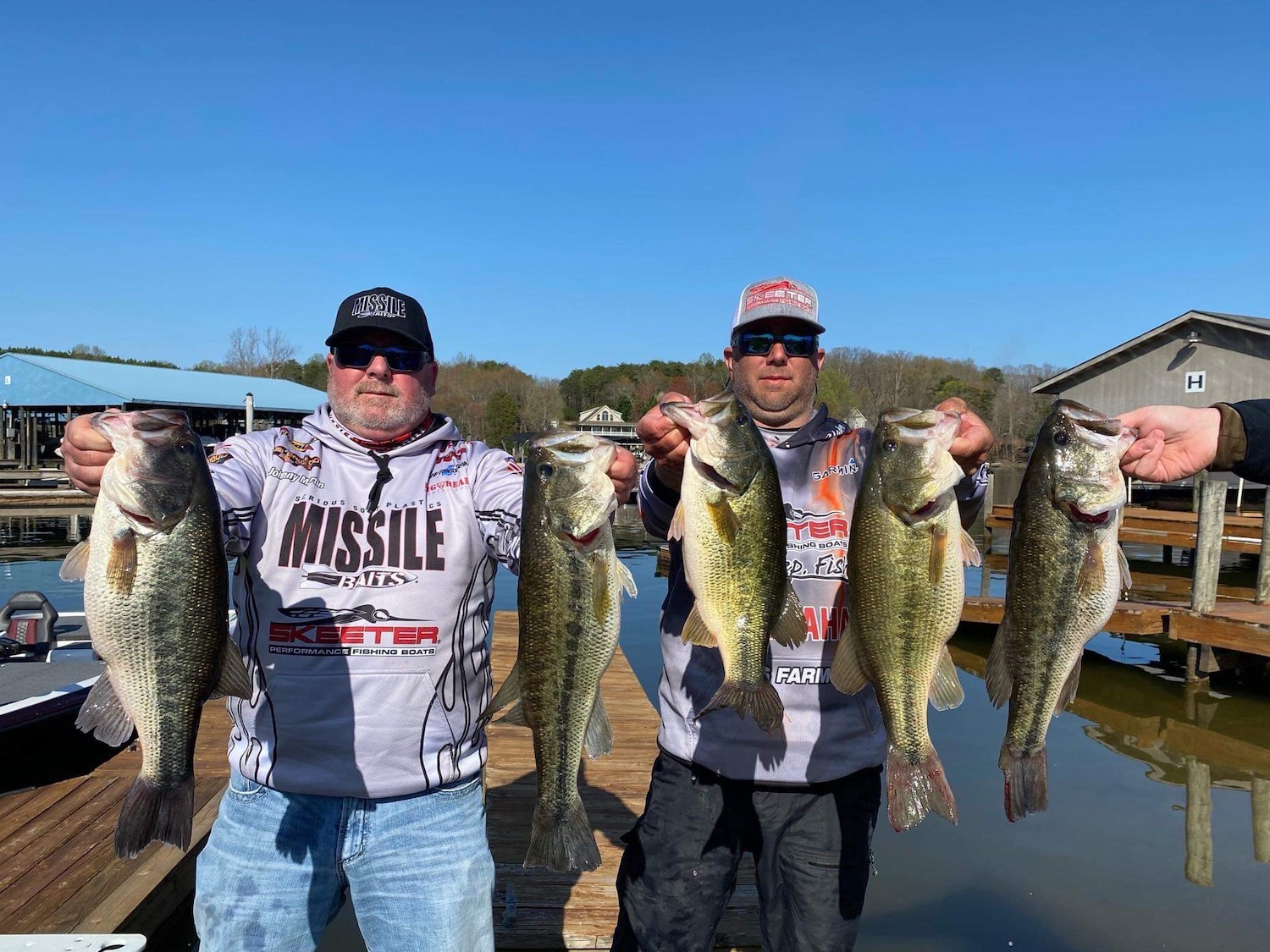 Q&A sessions: Ben Hudson brings us an exciting Q&A with one of the true hammers and premier guides of Smith Mountain Lake, Captain Chad Green!

Q: First off, congrats on getting your Captains License! What made you want to pursue being a fishing guide and what can a group expect when spending a day/night out on the water with you?

A: Ever since I was a teenager I wanted to be a guide and almost went out west to be a hunting guide with an outfitter. I have been taking people fishing and hunting since then and enjoy helping others experience the outdoors and enjoy them like I do. I have 2 groups of clients I take out fishing and they differ greatly. Some want to just catch a fish and experience fishing as we all have different levels of interests in fishing. And others want to learn a specific technique, learn the lake, learn typical patterns in a specific time of year. No matter what the expertise is we still have a fun trip and they usually learn something after spending time with me that they didn’t know before which always a goal for me is for the client to go home with more knowledge or skills than what they had before.

Q: You and partner Johnny Martin had a run of back-to-back tournament bags of over 24lbs this spring on Smith Mountain Lake in The Bass Cast’s first event and CATT spring final. That’s a pretty incredible feat. Can you tell us a little bit about how your days played out in those 2 events?

A: Yes, those were 2 great days on Smith Mountain. We caught a lot of fish each of those days and the days went well with no mistakes, other than not covering some water that we should have as we ran out of time. I feel like we could have upgraded possibly with how the bigger fish were feeding later in the day but that’s the way it ended. We culled a low 20’s limit out of the boat after 11am on both of those days fishing completely different areas and techniques each day. We caught fish anywhere from 20ft to 2ft on both days we didn’t lose any fish which helps a lot but we still finished 2nd both days by less than 4-5 oz combined which is tough to swallow, but that’s fishing. I still remember Johnny sitting down in the boat and saying “I cant take any more of this my nerves are shot” LOL. We were catching em’ left and right and 4 pounders were just thrown back and you pondered over how many times you would have liked to have had one of them.

Q: I saw where you recently fished a few night tournaments, and came in with some impressive catches. What’s the night bite been like on SML this year and what is the biggest difference between daytime and nighttime fishing there?

A: Night fishing on SML this year has been very good and fairly consistent for me, it was a little later this year than normal for the deeper water bite. I don’t have time to fish a lot of night tournaments anymore but catching the 3.5 plus pound fish was very plentiful this year. The biggest difference between night time fishing on smith mountain and day time is how the fish react to darkness and each night is different and details are key after dark. You must pay close attention to where you get bites and the quality of fish to be competitive at night here because it changes after dark most of the time.

Q: As summer is coming to a close and fall is approaching, which tournaments are you most excited about for the fall season?

A: I like the early fall tournaments as fish are transitioning and I understand their movements a little better. As we get into October, it starts to get a little tougher because you have warm and cold days and then in November when the real cold sets in it gets a lot more consistent. So for me, September and November are more my favorite as I have also had great days in October, but I have never seen October be consistent from year to year. That has always been one of the toughest months to fish on this lake for quality fish and weights usually drop off during that month.

Q: In your opinion, how does fall differ from the springtime on Smith Mountain?

A: I think the fall differs from the spring on Smith Mountain because the fish are a lot more spooky, and they don’t feed like they do in the spring. You also have a lot of smaller bait fish and clearer water which tends to make a finesse presentation presentable. I also believe there are 2 different groups of fish one preys on the crawfish in the fall and others follow baitfish around. Pick your poison, and go with the flow. If you’re not catching 4 plus pound fish then you probably aren’t doing the right thing. 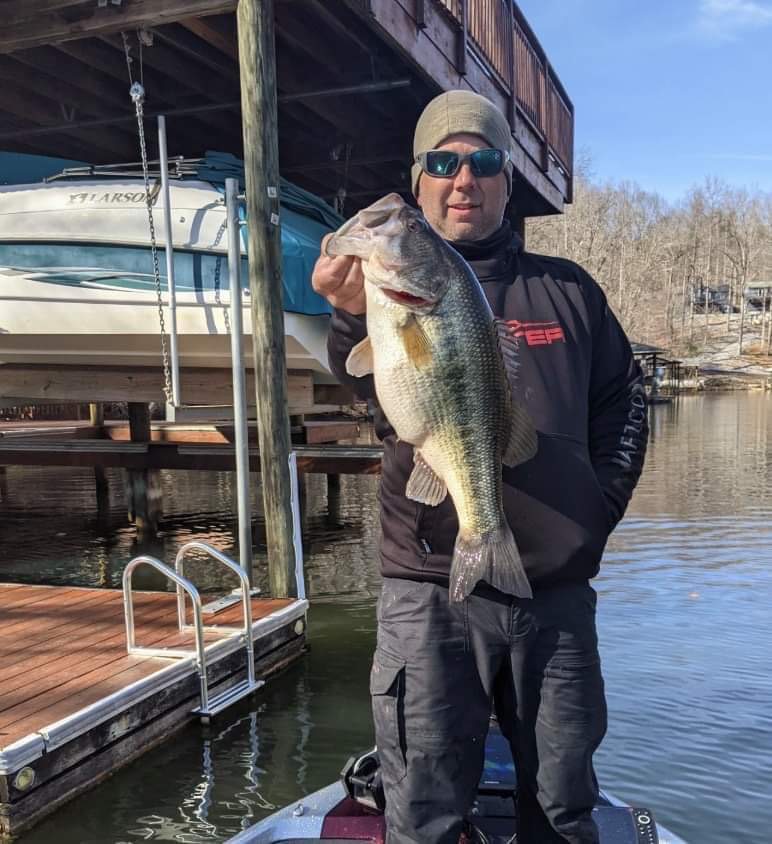 A: My favorite bait by far is a jig. I can fish it from January to January, rain or shine, deep or shallow. I make my own and if its not green and brown, make sure its brown and green. Now just make sure it’s the color of a crawfish, and fish it where the fish are. You cant catch em’ if they aren’t there. You just can’t beat a jig there is not another bait still to this day that is more consistent on catching big fish.

Q: What are the biggest largemouth and smallmouth that you have ever caught out of SML?

A: The biggest LM on this lake for me is 9lbs 14oz and the SMB is just a little over 5lbs. There are a lot of big bass in SML. If I remember correctly, I caught 5 over 8lbs this spring during weekdays, of course, which seems like that’s always the case for me. I don’t target smallmouth on this lake much because the real ones live in Lake Erie LOL. That’s another story. 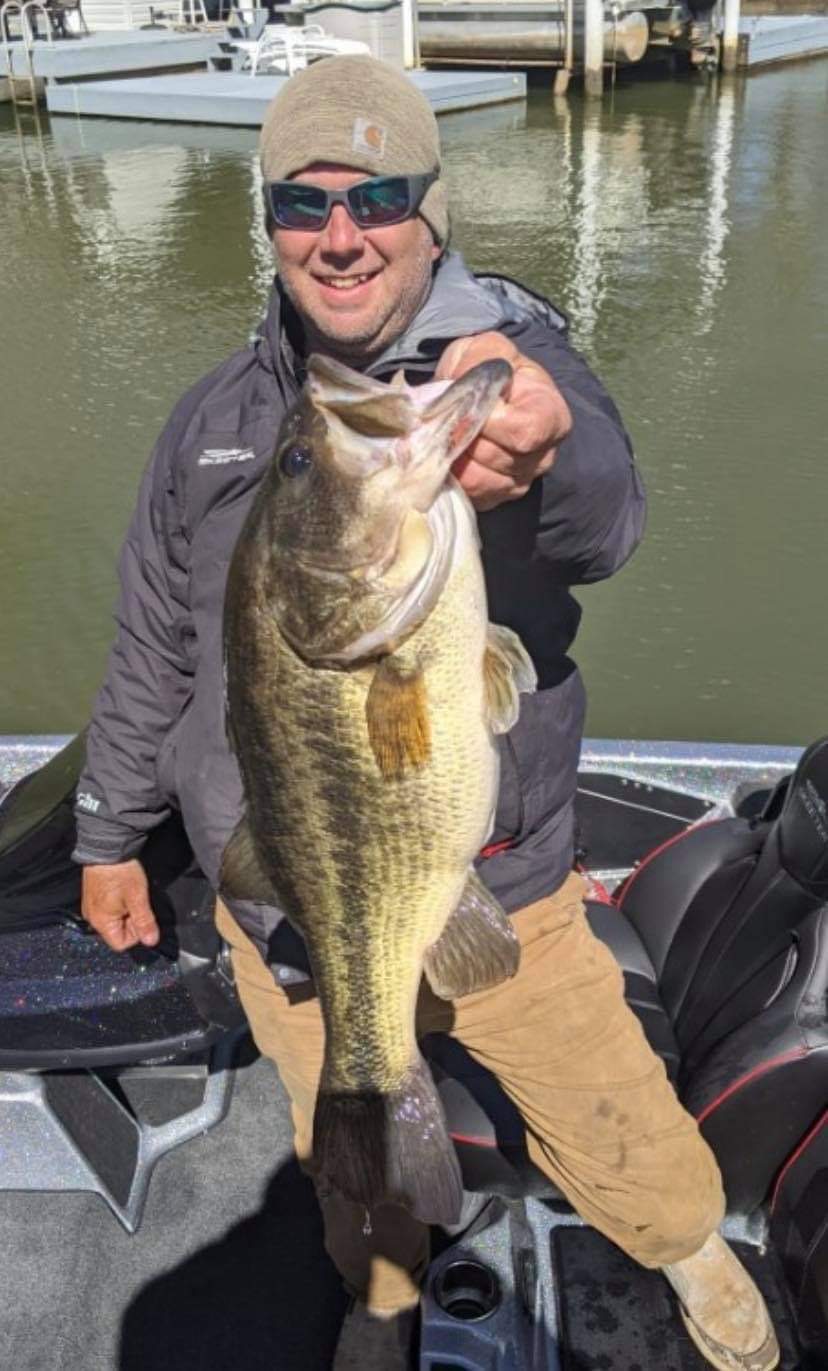 Q: What do you consider your biggest tournament win of your career, and why?

A: The biggest tournament wins for me have been Anglers Choice. I have 2 of those and should have had some more, but that’s the way things go. The one that sticks out in my mind the most is one that me and long time partner Dean Wood won years ago. I think we had 23lbs and something, and we also won big largemouth and big smallmouth that day. It was big win for me as team tournaments can be the hardest ones to win, because your partner has to be successful most of time, also its not many times where you win a team event with one man’s catch. That tournament was memorable time frame as large weights were not as common then.

Q: I’m a sucker for “what if” scenarios when it comes to fishing. Do you have any on the water regrets, or any particular lost fish from this year that still haunt you?

A: Oh yes, of course somebody always has the one that got away story. The Anglers Choice tournament here in May. On Saturday we had a great catch, and lost a big one under a dock. Then had another chance at a giant which would have put us well over 20 lbs. We finished 5th with 17-something and it only took 19 lbs to win. Sometimes things just don’t go your way, all the stars have to align out there to win. I have been very blessed and thankful for the times that they do. 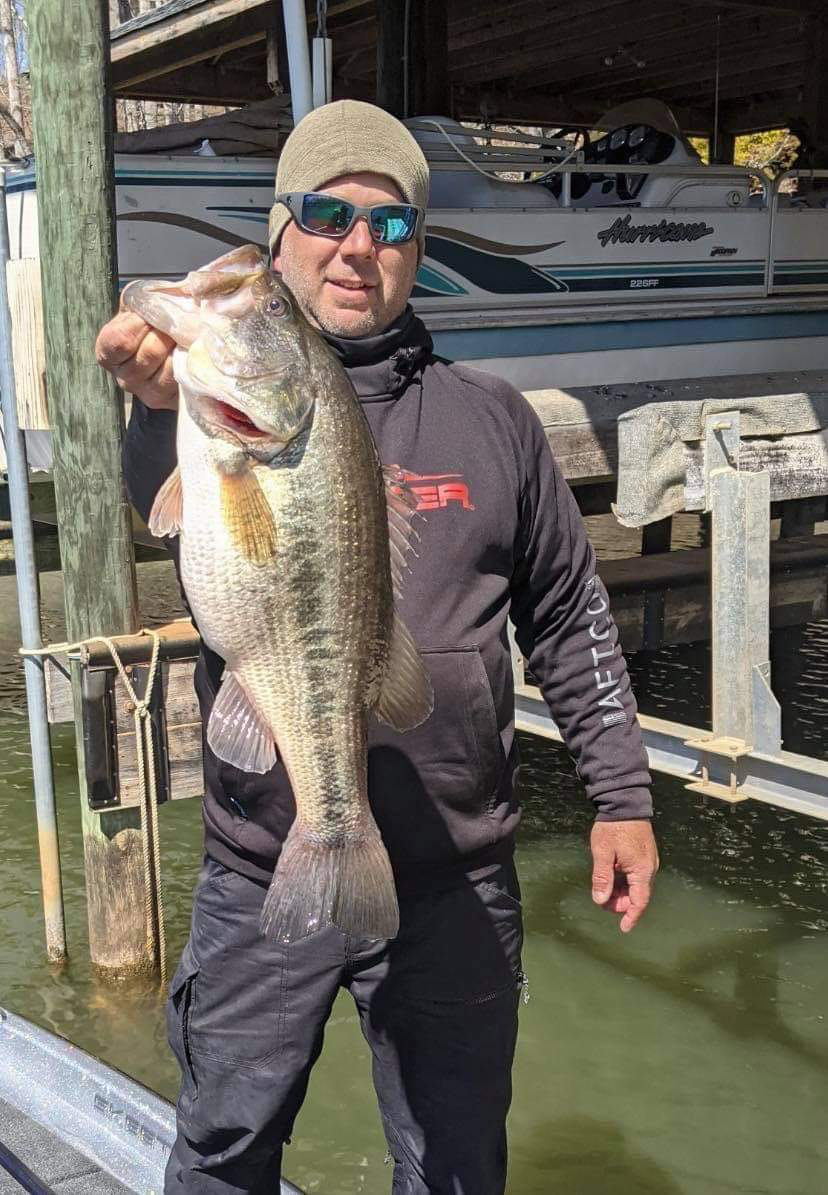 Q: Smith Mountain tournament weights have skyrocketed in the past 5 years, and even more so in the past 2 years. As one of the best anglers on the lake, no one knows about this better than you! Do you think the lake has that many bigger fish in it now, or have the anglers fishing SML just figured these big fish out?

A: There is no question in my mind that the F1 tiger bass are taking a large part in this. We have seen our average size catch ratios go up each year since they were stocked. Its going to continue to climb for years to come, and I do believe todays anglers are figuring out how to catch these bigger fish now. I have fished the lake for a long time and remember tournaments in October years ago only taking 10lbs to win. I have seen a definite increase in bass over 8 lbs the last 3 years, and I feel like its going to only get better in years to come. I also believe part of this is due to the low numbers of large stripers in the lake, and that makes larger forage more plentiful for the bass. I have been around long enough to see the effects of large stripers and forage numbers. When the gizzard shad are plentiful, the stripers sizes are smaller, and when they go down in numbers the stripers are more plentiful in size. We now have a very stable population of blue back herring in the lake and that creates a whole different scenario. They were not stocked here and have been collected in sampling for a long time, but the population is now getting to a point that’s noticeable. We have a prized lake here and by far the best fishery in the state.

Q: What is one personal on-the-water goal you hope to achieve for the rest of the year and for the 2022 fishing season?

A: My goal each year is to learn a new area or a new way to catch them, because it doesn’t take long for us to say “we used to catch em doing this or that”. Its strange how it changes over time and we never understand why that happens. My Goal for 2022 is break the 30 lb mark in a tournament, as I tried really hard to do this spring, but failed. I have done it during the week, breaking that mark with almost 33 lbs, but weekdays don’t count. That’s just a few pictures and some good memories with a friend.

Q: If a beginning angler is reading this, what is one tip you can give to help them catch more fish on Smith Mountain Lake.

A: The best tip I can give a beginning angler is learn to fish without electronics first. Learn bottom composition by feel of the rod. Be patient as big fish are typically slow movers. Don’t be afraid to cast at the same exact spot numerous times. Learn the difference in a fish feeding and feeding a fish. Take precious care of the fish, we have an opportunity to catch and cherish every minute of it. And always remember you can’t catch another mans fish, and your fishing against the fish, not fisherman.

The Bass Cast would like to send a big thank you to Captain Chad Green for taking the time to sit down and sharing some great information with us in this Q&A!
If you are interested in fishing with Chad on a guide trip on Smith Mountain Lake, you can reach him at “Last Cast Guide Service” on Facebook.