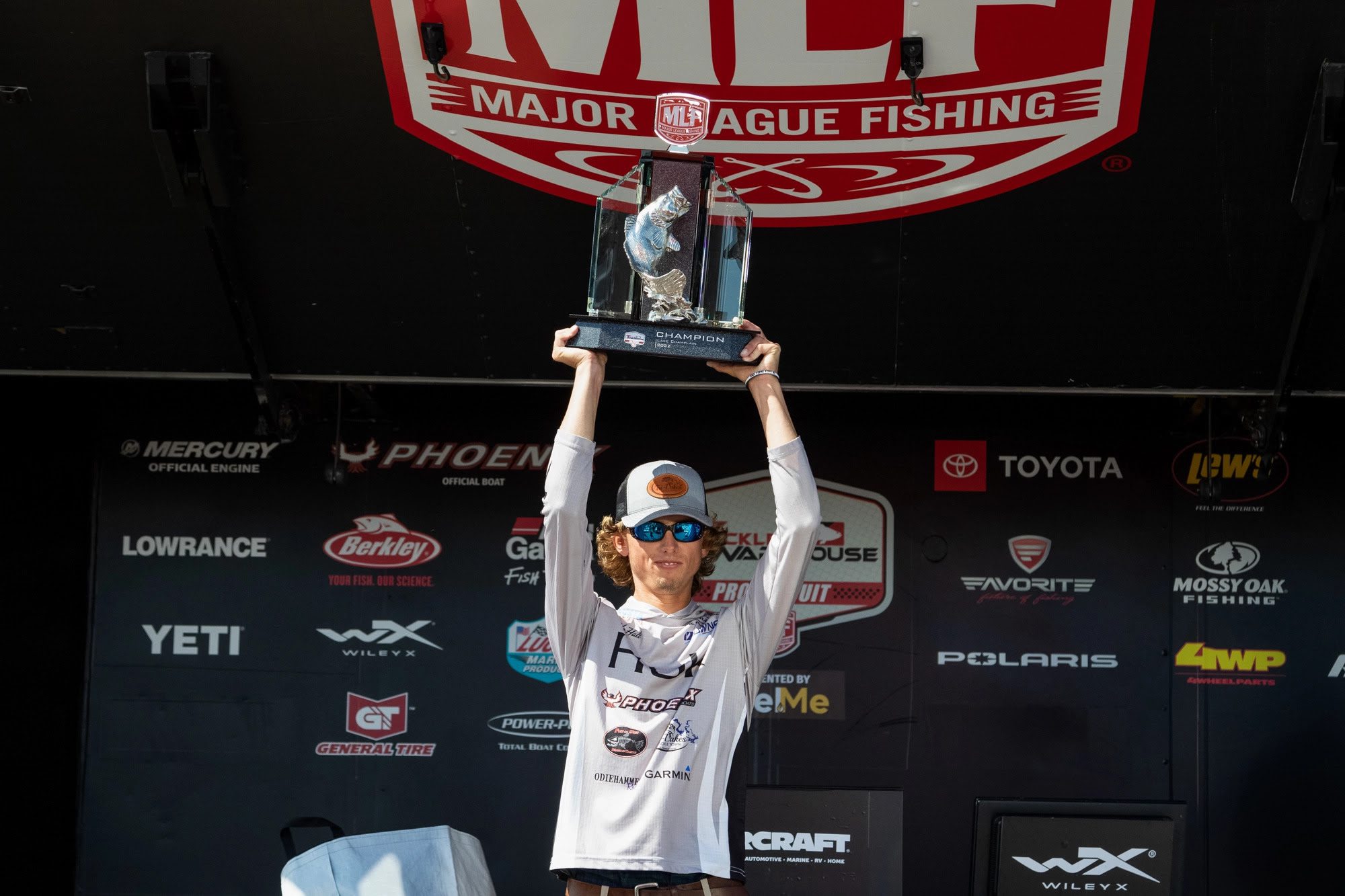 PLATTSBURGH, N.Y. (Aug. 1, 2022) – The anticipation was palpable at the weigh-in on Championship Monday, with anglers, their families and fishing fans on the edge of their seats after the final day of the MLF Tackle Warehouse Pro Circuit Covercraft Stop 6 at Lake Champlain Presented by Wiley X in Plattsburgh, New York. When the MLF NOW! livestream concluded, the unofficial results showed three pros tied at the top of the leaderboard with 21 pounds even – Dakota Ebare of Brookeland, Texas, Jon Canada of Helena, Alabama and Kyle Hall of Granbury, Texas – all in the race and in solid contention for the top payout of up to $135,000.

In typical fashion, Chris Jones – the Tackle Warehouse Pro Circuit emcee – called for the pros’ bass one at a time, among murmurs and exclamation from the crowd in attendance, as brown, foot-ball sized Champlain smallmouths were placed on the scales. As the scales settled, a multitude of expressions crossed the anglers’ faces, but it was Hall who came out on top, narrowly edging out Canada by 1-ounce to take home his first MLF Tackle Warehouse Pro Circuit win and earn the top payout of $135,000, including the lucrative $35,000 Phoenix MLF Bonus.

Hall, who led three of the four days of competition, weighed in 21 pounds, 6 ounces on the final day, giving him a 1-ounce margin over Canada, who brought a limit to the scales weighing 21-5, good for second place. Ebare, long-time friend and traveling companion of Hall, finished the day in third place with a limit weighing 21-1.

“Out on the water, my scales said I had a pound less than I actually had, so I didn’t think I had enough to beat those guys,” said Hall. “I had seen some of their fish and knew Jon had a 5-pounder. Dakota said he had 21 pounds, so I figured I was out of it for sure.”

Hall and Ebare began traveling to tournaments together in 2016 and said they have become more like brothers over the years. Hall said the two friends spent 59 days together on northern fisheries, including Lake Champlain, in 2018, just to be on the water and learn to fish for smallmouths.

“Dakota and I spent every day on the water that we could during those two months, and it’s that time on the water that I credit to this win and the other successful tournaments I’ve had up here,” Hall said. “I’ve been fortunate enough to have a win on the Toyota Series before, and I know how close Dakota has come, so many times, so it was a little gut-wrenching to be in that tight of contention with him. I would have been just as happy for him to win one, but I was kicking myself in the weigh-in line for some of the decisions I’d made through the day.”

Hall said he spent the day haunting one of the same spots he’d been on all week, drop-shotting and throwing a Strike King 3X ElazTech Baby Z Too Soft Jerkbait, but said what varied in the Championship Round was his approach.

“I’d been hitting another area early and getting a quick limit, but I started today on a deep spot that has been playing well in the afternoons and caught a 4-pounder pretty quick. After that I drifted down the ledge a couple miles, but all I really did was waste time,” Hall laughed. “I fired up my engine about 12:30 and ran back to where I caught the 4-pounder and I was catching fish on every drop, as fast as I could. All I could think when I was sitting in that weigh-in line was how much time I wasted drifting away from the winning spot, and how that had cost me the win.”

But it didn’t cost Hall the win, or the coveted trophy, or the $135,000 paycheck and his hard work, positive mindset and perseverance paid off.

“I’ve been disappointed all year because I was having a terrible season, but I came here with the specific goal of winning this event and knowing I have what it takes to do well on this fishery, so to get it done feels great.”

The top 10 pros at the Covercraft Stop 6 on Lake Champlain finished:

Reese experienced mechanical issues on the way back to the weigh-in, resulting in a late check-in and the disqualification of his weight on Championship Monday. The General Tire pro finished the event in 10th place and earned a payout of $14,000.

The four-day Tackle Warehouse Pro Circuit Presented by Fuel Me Covercraft Stop 6 at Lake Champlain Presented by Wiley X was hosted by the City of Plattsburgh and the Adirondack Coast Visitors Bureau. The event will premiere September 3 on the CBS Sports Network.

In Tackle Warehouse Pro Circuit competition, the full field of 154 anglers competed in the two-day opening round on Friday and Saturday. The top 50 pros based on their two-day cumulative weight advanced to Sunday, then only the top 10 pros, based on cumulative weight from the first three days, continued competition on Championship Monday, where weights were zeroed, and the winner was determined by the heaviest weight from the final day of competition.

Pro Nick Hatfield of Greeneville, Tennessee, clinched the Polaris 2022 Rookie of the Year (ROY) award on Saturday, which is awarded to the rookie pro angler who finishes the season with the highest point total. For his efforts, Hatfield won a Polaris Ranger 1000.

Throughout the season, anglers are also vying for valuable points in hopes of qualifying for the 2022 Tackle Warehouse Pro Circuit TITLE Presented by Mercury, the Pro Circuit Championship, where they will compete for up to $235,000. The 2022 TITLE will be on the St. Lawrence River in Massena, New York on Aug. 16-21, and is hosted by the Town of Massena.