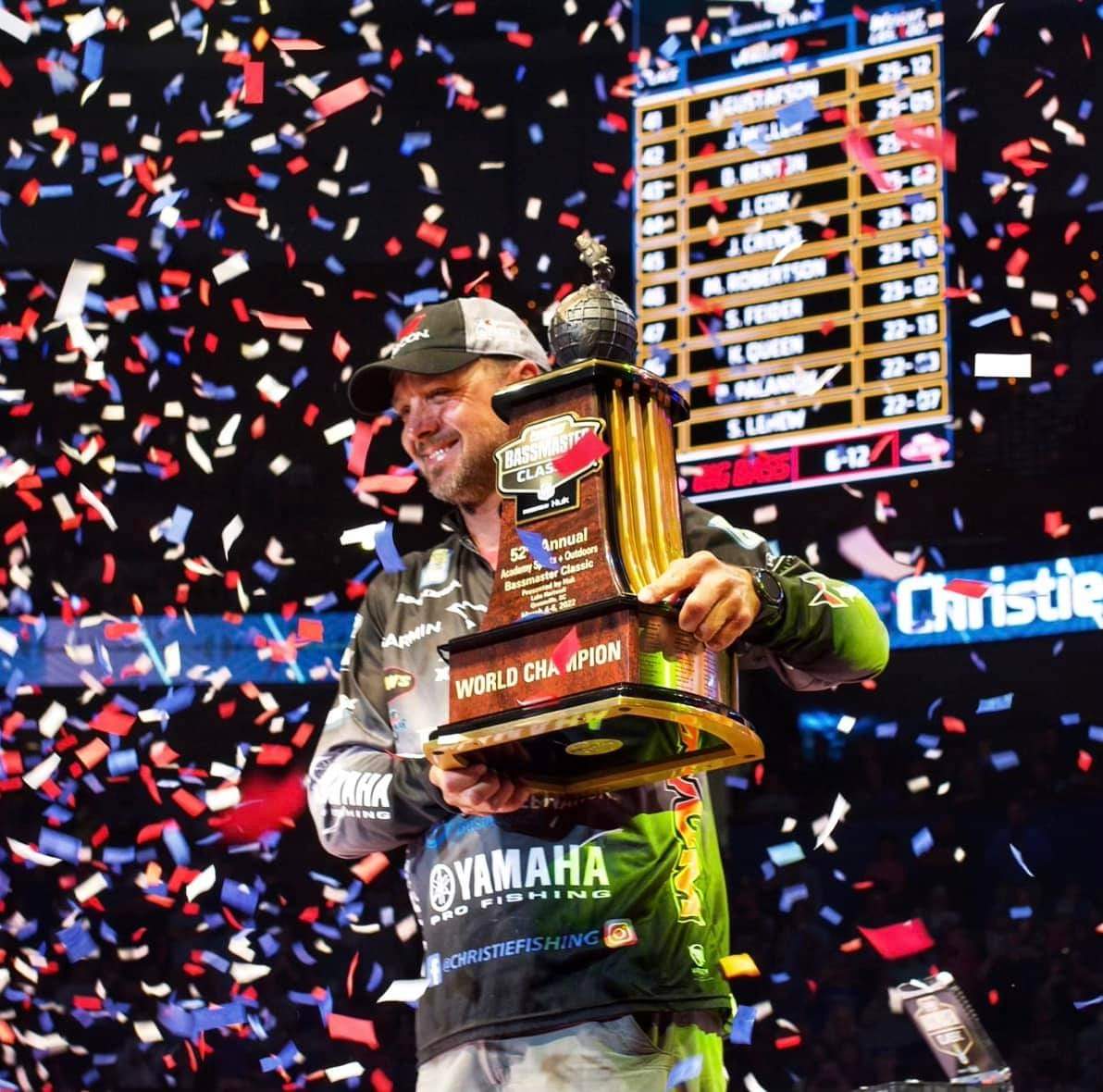 The Bassmaster Classic:
Winners and Workers
by Bruce Callis Jr.

The 2022 Academy Sports + Outdoors Bassmaster Classic presented by Huk is officially in the books and Jason Christie is the new champion, defeating the two time champion Hank Cherry. Kyle Welcher knocked Stetson Blaylock off the hot seat and then Jason came up and weighed in a bag of 5 bass for 17 pounds 9 ounces to win by a mere 5 ounces. He alternated between docks and deep water for his 54 pounds. He primarily used a jig with a Yum Craw Chunk and a new prototype soft plastic bait, the FF Sonar Minnow that will soon be released by Yum Baits on a 3/16 ounce jighead. 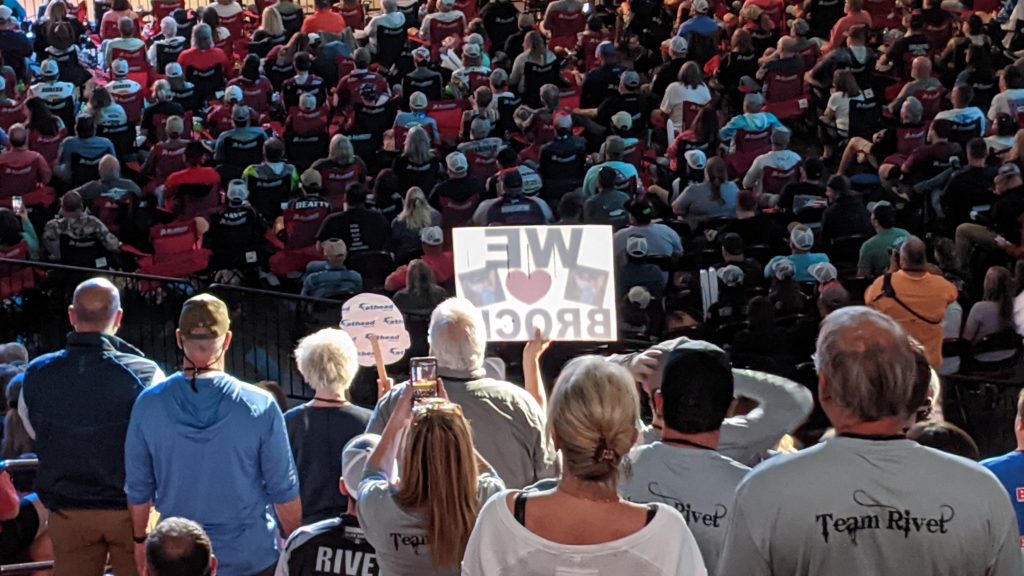 There is nothing like being in the arena watching the anglers as they make their way on stage during the final weigh-in. When they get down to the final 6, it becomes very electrified, you can feel the excitement coming from the crowd. It is something that you can’t feel on the screen, you must be there to understand it fully. As the boat comes in, the crowd erupts, and the angler feels it before he even goes into his livewell. Some will raise a bass or 2 into the air, while some grab the bag and jump onto stage. The intensity once the bag hits the scale is overwhelming. And then Dave Mercer announces it. When its big, they go wild. And that is intensified when the last man up brings in the bag that crowns him the champion. We see it,but you can only feel it in person.
And then once that happens, he rides out in his boat and is taken to a room so he can decompress. To allow it to soak in that he is the winner of the most prestigious tournament in bass fishing. It is never long enough, as he has to still go before the media and answer tons of questions. How does it feel, what did you use, where were you fishing, and whatever else they might ask. Mostly, they are still numb from everything that has happened before having to leave and go to another event that the winner must attend. 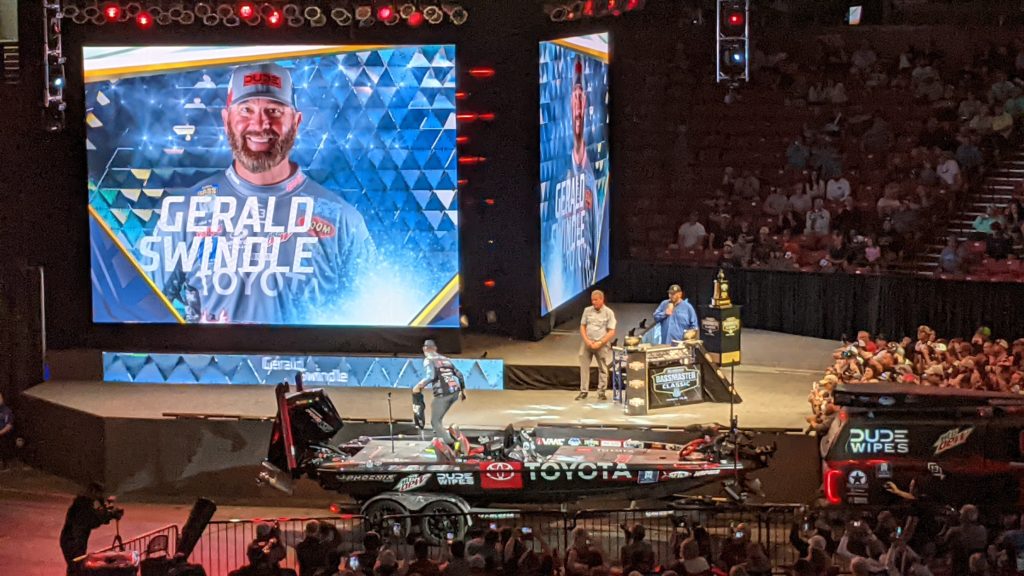 While all of this is happening, the work really begins. No, not for the anglers, but for the crew that must begin working on taking everything apart and pack it up. All of it must be put into trailers and taken back to B.A.S.S. headquarters to be stored away for next year’s Classic. But even then, they are already looking at what has to be changed to fit Knoxville. They have to lay out how the boats will be brought in, how many they can stage in the arena and safely exit before more come in. This year it was one came in, dropped off the angler and rode around the arena and stopped to wait for the next angler to enter. Once they entered, that boat exited and another angler was brought up the ramp to await their turn. There is a lot of planning to adapt to each arena.
This is just the tip of it all, as the Expo live set is pretty much the same, as each piece is packed up and hauled back. Some items stored, some are used at the next tournament, like cameras. There is so much work that goes into what we see on the television and in person. Things we probably never think about.

As far as what you see during the regular stops when the anglers come up to weigh in, that is a totally separate set up. That is a self contained trailer that is hauled to each event. Granted, so items may be from it, but not a lot. The holding tanks, the tents over them, a lot has to be set up and taken down at each event.

And while it seems perfect, it takes an army to get that way. From the B.A.S.S. employees, to arena staff that help stage everything, the staff that works the doors, the food vendors, the technical crew that makes sure the cameras work to the audio, to security, it takes an army to make it all happen. So when you watch it, think about the men and women who helped make it happen. Come to Knoxville and see it in person in 2023. Find me and say hello. Be a part of the excitement they call the Bassmaster Classic! 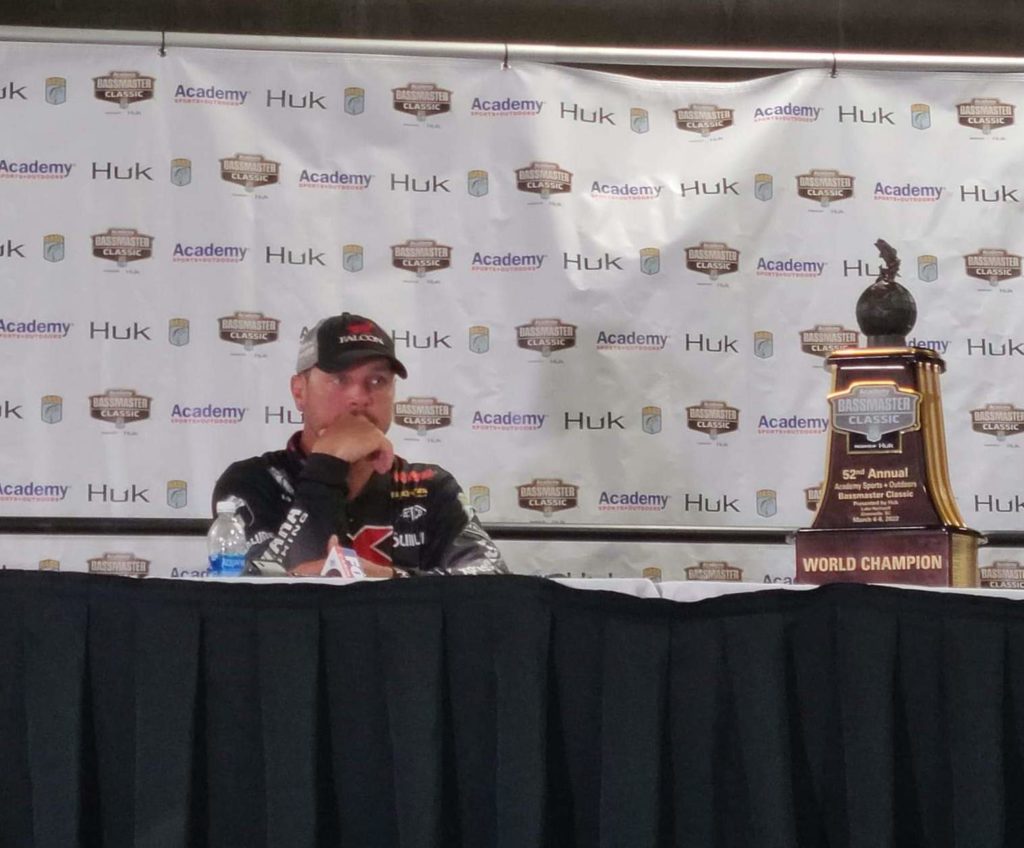 May Baits: Time to Think by Bruce Callis Jr