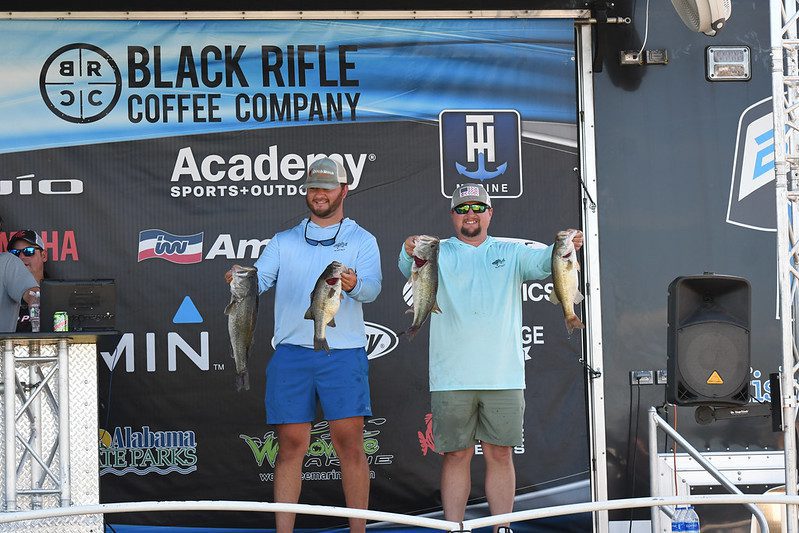 Eufaula, ALA- The South Division of the Alabama Bass Trail wrapped up its regular season with its final stop at Lake Eufaula where 225 teams fished for a 1st place prize of $10,000. This tournament also closed out the Angler of the Year Race. Teams finishing in the top 9 in AOY qualified to fish the B.A.S.S. Team Championship, and the top 75 teams qualified for the ABT Championship. On a very hot June day at Lake Eufaula the team of Trey Wade and Bradley Parnell weighed in 19.71 pounds for first place. 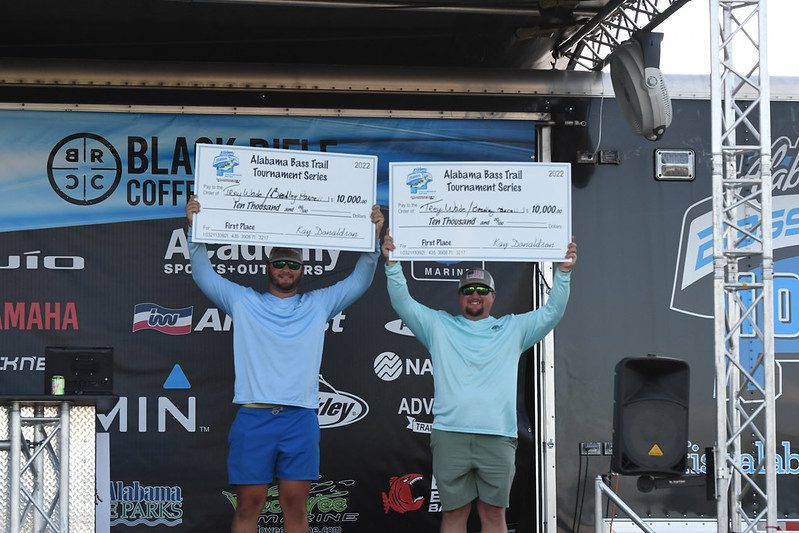 Tray Wade and Bradley Parnell, a first-year team on the ABT, found a school of fish in practice that was “in a mid-depth range. We wanted to fish away from the boat traffic and away from other anglers. When we found these fish in practice, they were a little smaller- about 1.5 to 2 pounds. Our goal was to go out today and catch those fish and make the ABT Championship. We started our morning up shallow and caught a couple of small fish on buzz baits. When the sun got up, we made the move to our practice area.” The team described this area as “a channel swing with wood.” They fished this area with med-shallow diving Bandit 200 series in a couple different colors including: spatter back, sexy shad and a mistake. With this win they collected a $10,000 pay day and punched their ticket to the ABT Championship.

Noah and Cole Godwin finished in second place with 19.18 pounds and $5000. This team has been very successful on the ABT in recent years with two wins and another top 5 finish.  They made the run-down river to target fish both shallow and deep. They caught them early, had a limit of 15-pounds in the first 10 minutes, and culled up to their final weight in the next thirty minutes. The team “never really got the big bite.”  They found the fish last weekend in “practice on a main river ledge that looked like there were 50 fish in there. We caught a couple 3 and 4-pound fish. We found a few more schools in practice, but our main spot seemed to have the best fish, so we ran straight there this morning.” The team caught fish almost every cast to start the morning on a 6 Sense Crush crank bait, Nichols Lures Ben Parker Mag spoon and a Big Bite baits B2 worm. “This lake has always gotten us, but this time we put in more idle time in until we found schools- that was the key to our success.”  Noah and Cole finished 16th AOY and qualified for the ABT Championship. 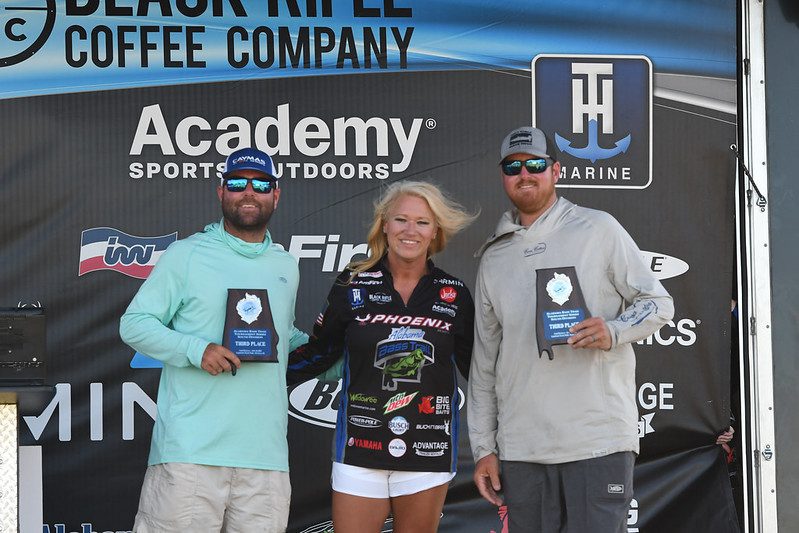 Josh Chapple and Paul Davis finished in 3rd place with 18.83 pounds and cashed a $4,000 check.  The team spent the day fishing offshore. “Practice was tough; it was hard to locate fish this week. Today we made about 30 stops fishing from take-off all the way down to White Oak Creek. This morning we had two really good fish catches that helped us. Those two fish were the biggest we got all week, and it really was a lot of luck. We caught fish on a bunch of different baits like a Strike King Sexy Shad 6xD and a big red worm like everyone throws here.” The team finished 3rd in AOY and qualified for the B.A.S.S. Team Championship and the ABT Championship.

Brain Stiffler and Wesley Gore finished today with 1054 AOY points moving them from 2nd to 1st place. With those points they also claim the ABT overall AOY since they finished with more points than the North Division AOY Team of Wesley Sams/Jordan Wiggins with 1037. The top 9 teams in the South Division are listed below. They all qualify to fish the B.A.S.S. Team Championship.

The top five standings are below for a complete list of standings please visit:

Download and listen to the ABT Podcast on your favorite Podcast app by searching for “Alabama Bass Trail Podcast.”  The Podcast is released each week on Tuesday.