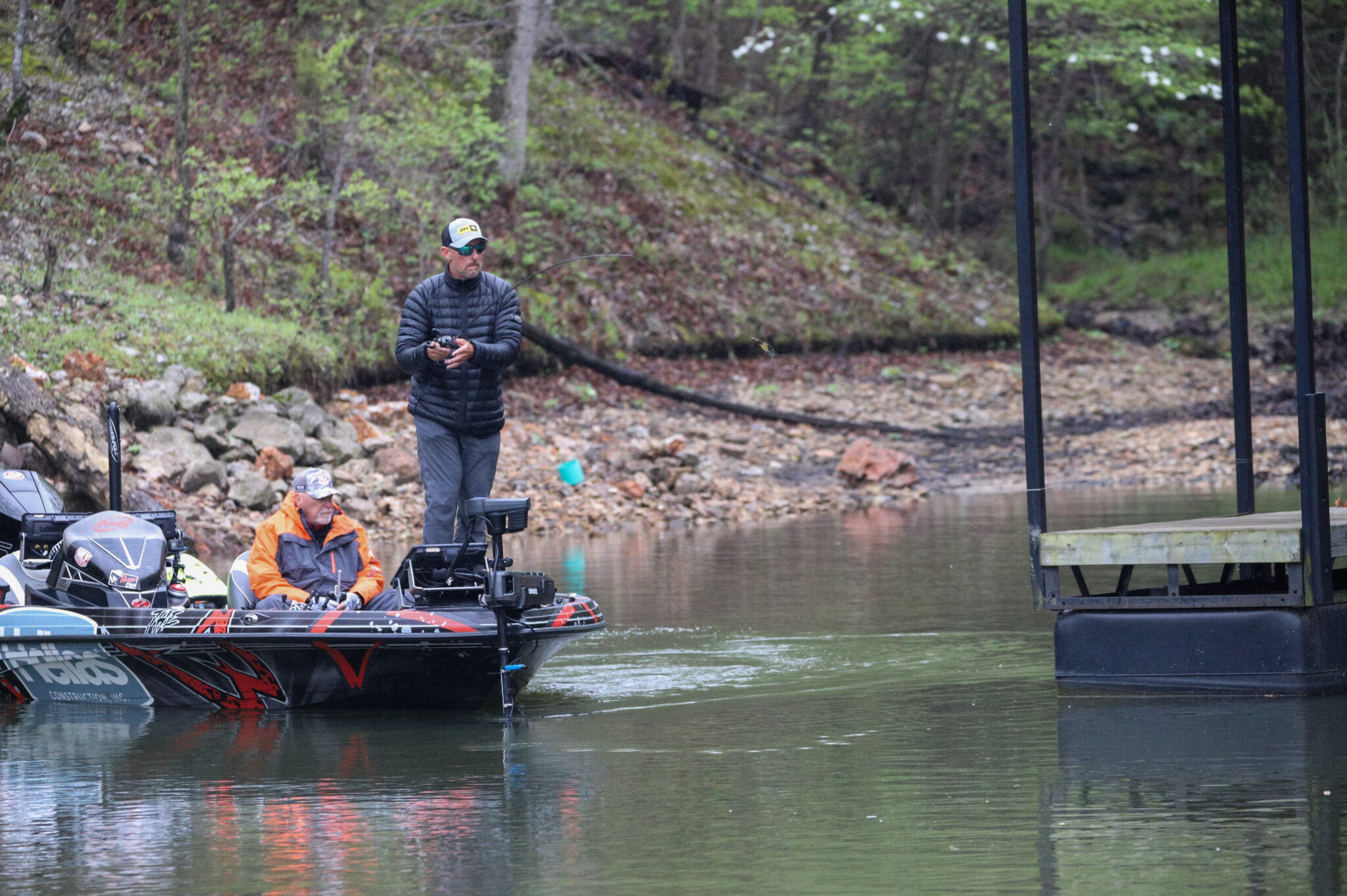 OSAGE BEACH, Mo. (May 4, 2022) – “The W” got it done Wednesday at Lake of the Ozarks. Spring City, Tennessee, pro Wesley Strader caught 11 scorable largemouth weighing 34 pounds, 2 ounces, to best the 38 anglers competing and win the Knockout Round at the MLF Bass Pro Tour Bass Boat Technologies Stage Four on Lake of the Ozarks Presented by Bass Cat in Osage Beach, Missouri. The final 10 anglers are now set, and competition will resume Thursday morning with the Championship Round when weights are zeroed, and the angler that catches the most one-day weight will take home top prize of $100,000.

The six-day tournament, hosted by Central Missouri’s Tri-County Lodging Association, the Lake of the Ozarks Fishing Council and BassingBob.com, showcases 80 of the top pro bass-fishing anglers in the world competing for a purse of $805,000, including a top cash prize of $100,000 to the winner. The tournament is livestreamed each day at MajorLeagueFishing.com and the MOTV app, and also filmed for broadcast later this fall on the Discovery Channel.

The top eight pros from Wednesday’s Knockout Round that will compete in Thursday’s final-day Championship Round on Lake of the Ozarks are:

They’ll be joined by Qualifying Round Winners:

Full results for the entire field can be found at MajorLeagueFishing.com.

“What an amazing, blessed day,” Strader said in his post-game interview. “I’m happy to win a round. I know it’s not the Qualifying Round day that you really want to win, but it feels nice to just get a win.”

Strader caught an early 4-pound, 10-ounce largemouth on a Z-Man ChatterBait in Period 1, then switched to the bait that he did most of his damage on – a green-pumpkin-colored 3/8-ounce compact jig with a Zoom Speed Craw trailer. He credited his Lowrance electronics as being crucial to his success this week.

“My Lowrance has been a big key for me,” Strader said. “Being able to see how those contours fell in – most of the bites were kind of halfway back, and out, and you had to have some steeper stuff nearby. I found all of that on my C-Map.

“I’m excited about making it to the Championship round, I just hope they bite as good as they did today,” Strader said. “I think I found an area of the lake that has some fish that are willing to bite – some of them are up spawning, and some of them aren’t. We’re going to go home, sharpen our hooks, then go to the store and see if we can find any more of these jigs. I’m going to buy every one they have in the tackle shop, spool up some new Shooter Sunline and get ready to go for tomorrow.”

Rounding out the top 40 finishers were:

Overall, there were 241 scorable bass weighing 707 pounds, 4 ounces caught by the 38 pros Wednesday. The catch included 23 four-pounders, nine five-pounders and one six-pounder.

The final 10 anglers will launch Thursday at 7:30 a.m. from the Grand Glaize Marina Recreation Area, located at 711 Public Beach Road in Osage Beach. Each day’s General Tire Takeout will be held at the Marina, beginning at 4 p.m. Fans are welcome to attend all launch and takeout events and also encouraged to follow the event online throughout the day on the MLF NOW!® live stream and SCORETRACKER® coverage at MajorLeagueFishing.com.

On Championship Thursday, May 5, from 4 p.m. to 6 p.m. MLF will host a Celebration Event for fans of all ages, inviting fans to come out and celebrate with the professional anglers from the Bass Pro Tour as they crown the champion of the Bass Boat Technologies Stage Four on Lake of the Ozarks Presented by Bass Cat. The FREE, family-friendly event will be fun for fishing fans of all ages. The first 50 middle school or high school anglers will receive a free Abu Garcia rod and reel combo valued at $100. The final 10 Championship Round Bass Pro Tour anglers will be on hand to meet and greet fans, sign autographs, take selfies and participate in tackle giveaways.

The Bass Boat Technologies Stage Four on Lake of the Ozarks Presented by Bass Cat features anglers competing with a 2-pound minimum weight requirement for a bass to be deemed scorable. Minimum weights are determined individually for each competition waters that the Bass Pro Tour visits, based on the productivity, bass population and anticipated average size of fish in each fishery.

The Bass Pro Tour features a field of 80 of the top professional anglers in the world competing across seven regular-season tournaments around the country, competing for millions of dollars and valuable points to qualify for the annual General Tire Heavy Hitters all-star event and the REDCREST 2023 championship.

The MLF NOW!® broadcast team of Chad McKee, Marty Stone and J.T. Kenney will break down the extended action on Championship Thursday from 7:45 a.m. to 4:30 p.m. CT. MLF NOW!®  will be live streamed on MajorLeagueFishing.com and the MyOutdoorTV (MOTV) app.

Television coverage of the Bass Boat Technologies Stage Four on Lake of the Ozarks Presented by Bass Cat will premiere as two two-hour episodes at 7 a.m. ET, on Saturday, Oct. 15 and Saturday, Oct. 22 on the Discovery Channel. New MLF episodes premiere each Saturday morning on the Discovery Channel, with additional re-airings on the Outdoor Channel. Each two-hour long reality-based episode goes in-depth to break down each day of competition.