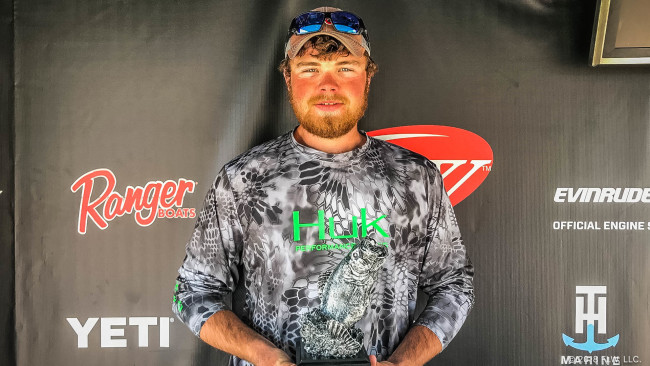 According to post-tournament reports, McCord caught his fish on the southern end of the lake flipping an unamed beaver-type creature bait.

Frazier caught a bass weighing 5 pounds, 10 ounces – the heaviest of the event in the Boater Division – and earned the day’s Boater Big Bass award of $470.

The top 45 boaters and co-anglers in the region based on point standings, along with the five winners in each qualifying event, will be entered in the Oct. 25-27 BFL Regional Championship on  Lake Chickamauga in Dayton, Tennessee. Boaters will compete for a top award of a Ranger Z518C with a 200-horsepower Evinrude outboard and $20,000, while co-anglers will fish for a new Ranger Z518C with a 200-horsepower Evinrude outboard.

The 2018 BFL is a 24-division circuit devoted to weekend anglers, with 128 tournaments throughout the season, five qualifying events in each division. The top 45 boaters and co-anglers from each division, along with the five winners of the qualifying events, will advance to one of six regional tournaments where they are competing to finish in the top six, which then qualifies them for one of the longest-running championships in all of competitive bass fishing – the BFL All-American. The 2018 BFL All-American will be held May 31-June 2 at Cross Lake in Shreveport, Louisiana, and is hosted by the Shreveport-Bossier Sports Commission. Top performers in the BFL can move up to the Costa FLW Series or even the FLW Tour.