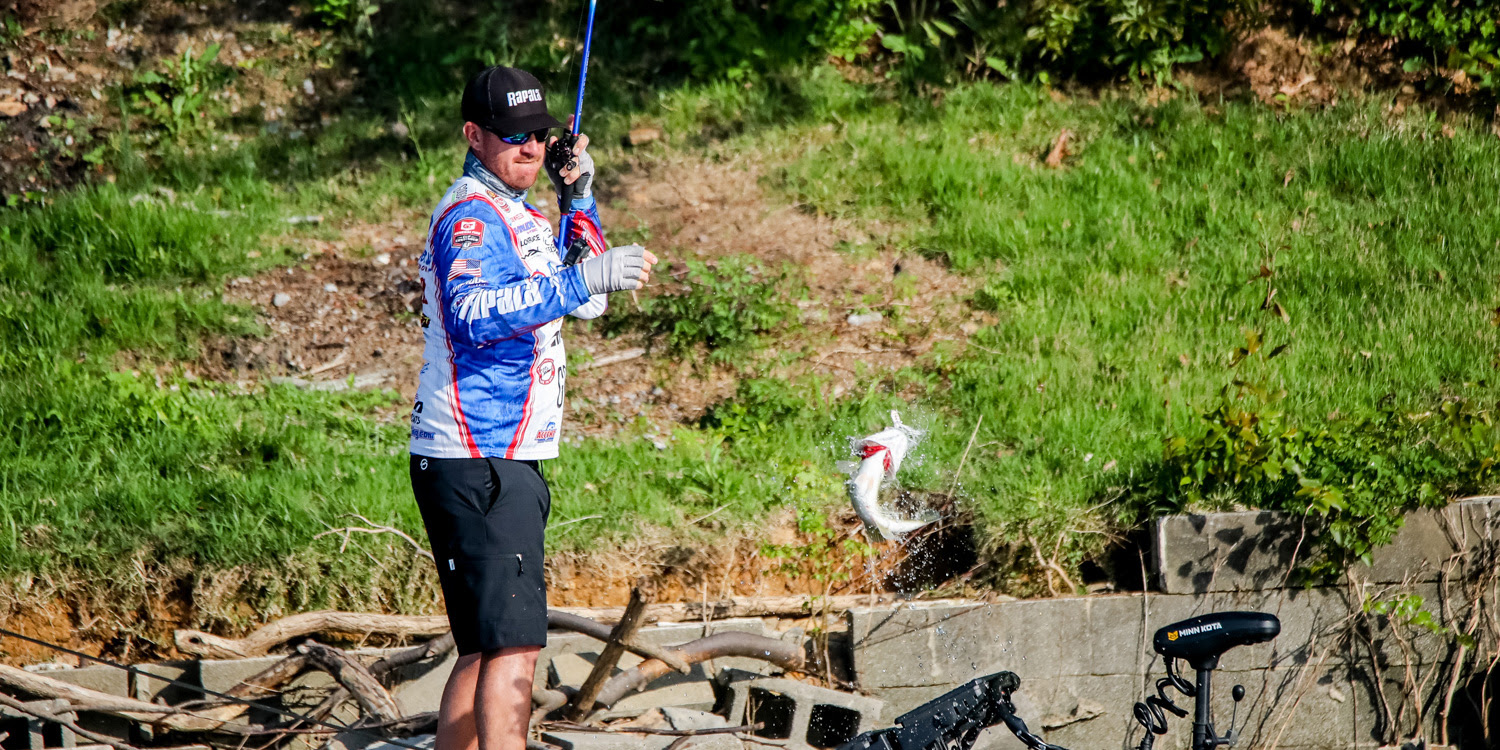 Facebook
Twitter
Pinterest
WhatsApp
MLF pro Jacob Wheeler piled up 36 of his 38 scorable bass in the first two periods of Shotgun Round 1 to lead Group A at the end of the day with a total of 61-pounds, 15-ounces.
Wheeler Maintains Momentum with Dominant Performance in Shotgun Round
at Phoenix Boats Stage Five Presented by Mercury

Print This Post
CULLMAN, Ala. (April 30, 2019)  – If you ever wondered if momentum is a thing in professional bass fishing, look no further than the five names at the top of SCORETRACKER™ after the first Shotgun Round of the Bass Pro Tour Phoenix Boats Stage Five Presented by Mercury: Jacob Wheeler, Andy Morgan, Wesley Strader, Ott DeFoe and Edwin Evers.
Led by Wheeler’s record-breaking 38-fish, 61-pound, 15-ounce performance, that quintet of Major League Fishing® (MLF) pros racked up 138 scorable bass for just over 236 pounds to leave Smith Lake with comfortable cushions to carry into their Elimination Round competition on Thursday.
It was a continuation of recent success for all five anglers: Evers has four top-10 finishes in four events this season and leads the Bass Pro Tour points race; DeFoe is just a month removed from a Bassmaster Classic win; Strader has seven Top 20s in his last season-and-a-half; Morgan is shooting for back-to-back wins; and Wheeler has two Top 5s in his last four events.
“Momentum makes you a little fearless, for lack of a better term,” said Morgan, who entered the week fresh off a win two weeks ago at Stage Four on Lake Chickamauga. “You’re just kinda ‘with it’ from the get-go, whether you’re getting bites from the get-go or not. Everybody is at their best when they’re relaxed, and that’s what everybody is after in this sport: to be relaxed, and to just keep it rolling.”
Wheeler Was Dominant on Day 1
No matter how you measure Wheeler’s performance, “rolling” is an accurate description. On a fishery that showed signs of being in a slight post-spawn lull before the event started, Wheeler figured out the right patterns and the right locations early in the day, piling up 36 of his 38 fish in the first two periods and overtaking Morgan, who had rang up 18 fish and a big lead in Period 1.
“That morning bite is definitely a key opportunity to catch a majority of your fish,” Wheeler admitted. “Your goal is to try to catch as much as you possibly can in the Shotgun Round so you’re not under the pressure to have to catch them in the Elimination Round. You see this day in and day out in this format: a good Shotgun Round puts guys in position to try to go dial in new patterns – or just stay on top of what’s going on – in the Elimination Round, so they can make it to the Knockout Round, and then make the Top 10 cut.”
Wheeler’s assessment of the morning bite is accurate: 238 fish were recorded on SCORETRACKER in the first period; that total dropped to 203 and 195 in Periods 1 and 2.
Group B Up Next
The 40 anglers in Group B compete Wednesday in Shotgun Round 2. Based on Day 1 results, the Elimination Line will hover around 25 pounds, but and if weather forecasts are correct, Group B’s round could be even more of a smashfest than Day 1.
“Day 2 is supposed to be a little overcast and maybe blowing a little bit, so I think we’ll have a little bit better conditions for fish to bite,” said Group B competitor Jeff Sprague.
Looking Ahead
The field will carry their Shotgun Round weights into the two Elimination Rounds on Thursday and Friday for the Elimination Rounds. The Top 20 anglers from each group will advance to the Knockout Round on Saturday. The Top 10 anglers in the Knockout Round will advance to the Championship Round on Sunday.
How, Where, When to Watch
Competition begins daily at 6:30 a.m. CT, with live, official scoring available via SCORETRACKER on MajorLeagueFishing.com and on the MLF app. The MLF NOW! live stream starts at 9 a.m. CT, with live, on-the-water coverage continuing until lines out at 2:30 p.m. The Berkley Postgame Show live stream will start at 4 p.m. daily.
The Day’s Results
To see all results from today’s Shotgun Round, and to keep up with cumulative results throughout the week, visit MajorLeagueFishing.com and click ” Results.”