Willie McMullen of Oxford, Ga took home the first place trophy and $824 cash on Febuary 9, 2019 on Lake Sinclair at the Bass Pro Shops Fishing Tournament for D72.   He had a limit of five bass, with a total scale weight of 19.74 pounds.  Several anglers weighed in five pounders, but Willie took home another trophy for Big Bass with a 5.98 pounder and additional cash of $240 for the optional big bass pot.    Willie said he caught his fish using a jig on sea walls and docks.  His total earnings for the day was $1,064!

Mark Whidby of Haddock, Ga also had a five fish limit and won $548 cash for second place with a sack totaling 16.83 pounds.   He secured his sack with a 5.04 pounder.   Mark was presented the second place trophy.

Kip Carter, Chad Wilson, Lance Collins, and Jody Weldon all followed closely with weights over 14 pounds.   They all had a successful day on the lake and brought a five fish limit to the scale.

Forty eight anglers participated in the tournament for D72, running out of Dennis Station DNR ramp.  The weather remained cloudy for most of the day, and temperatures ranged from 35 degrees at blast off to mid 40’s at 3 o’clock. The water temperature was in the mid 50’s, and the lake is still stained from recent rain. 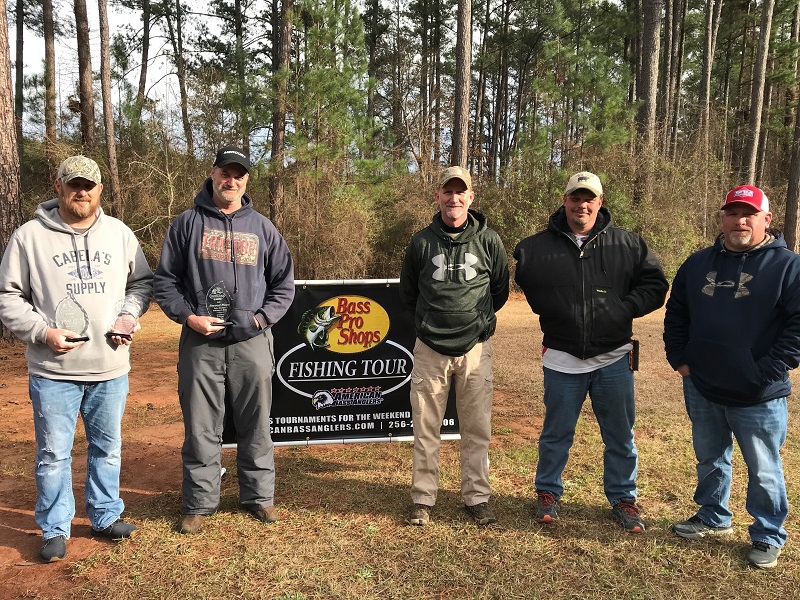 After the awarding of trophies and cash payouts, there were drawings for the anglers present. Four $50 bills were won by Aaron Batson, Tommy Cooper, Swinton Sikes, and Mike Blackshear.  Jody Weldon and Jay Carter won an 8 ounce bottle of G-Juice from T-H Marine. Thanks to Danny Taylor for assisting with morning boat checks and weighing fish in the afternoon.

The next tournament for D72 will be February 16, 2019 on Lake Oconee going out of Sugar Creek Marina.
Please contact Director Benny Howell at 770-365-4795 for more information.