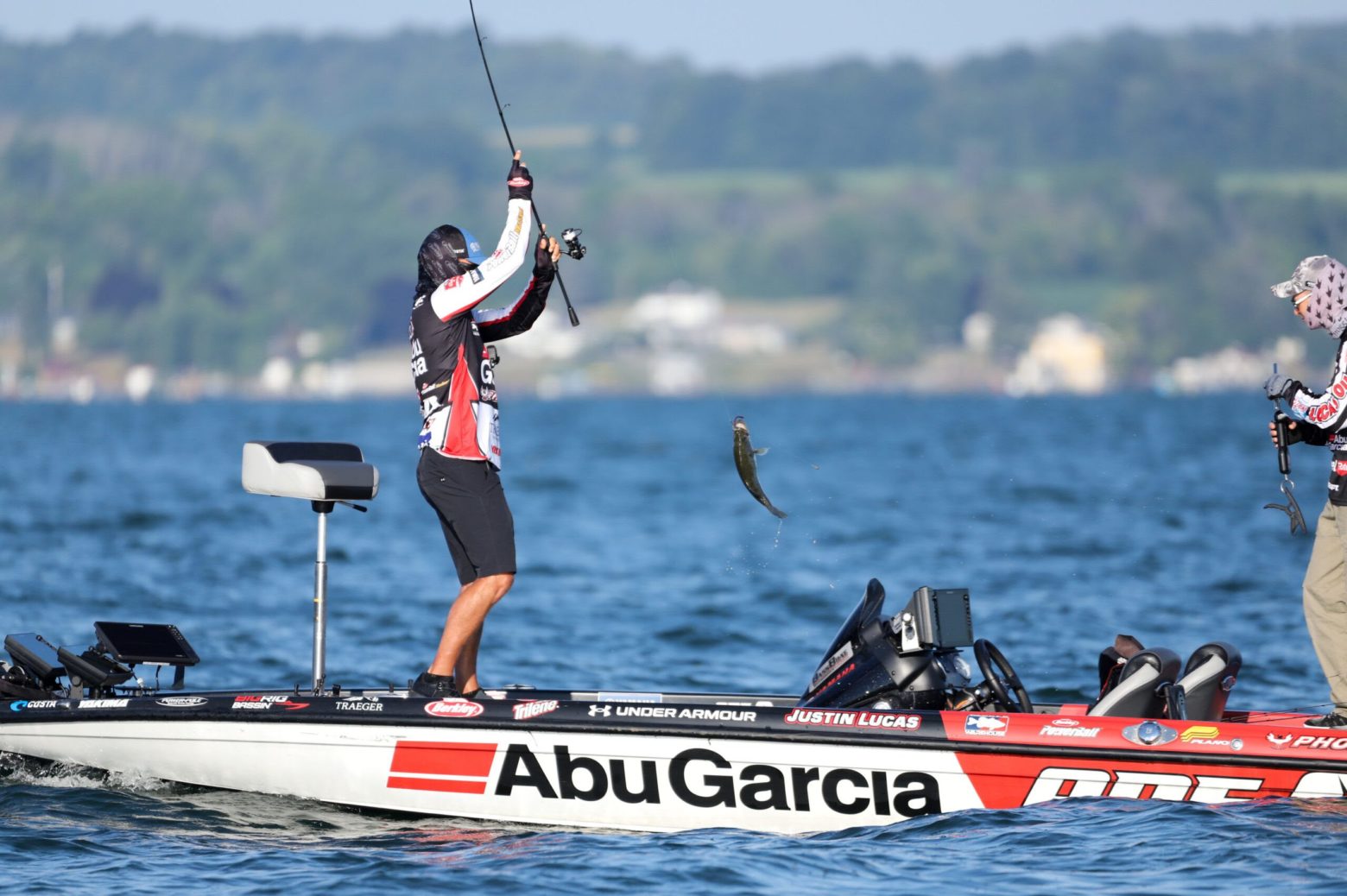 Lucas and Wheeler Both Target Largemouth, Catch 100+ Pounds Saturday to Pace Group A – Group B to Compete Sunday

UNION SPRINGS, N.Y. (Aug. 6, 2022) – It was a blazing fast start Saturday, on Day 1 of the the Fox Rent A Car Stage Six on Cayuga Lake Presented by Googan Baits. And Cayuga Lake was the day’s brightest star.

The six-day event, hosted by the Village of Union Springs, will showcase 80 of the best professional anglers in the world competing for a purse of more than $805,000, including a top payout of $100,000 to the winner. The tournament is livestreamed each day at MajorLeagueFishing.com and the MOTV app, and also filmed for television broadcast later this fall on the Discovery Channel.

Although Lucas and Wheeler seem to have a substantial lead on the rest of the field, numerous anglers held the lead throughout the day, including Favorite Fishing pro Dustin Connell of Clanton, Alabama, who finished the day in third place with 23 bass totaling 88-5. Waco, Texas’ Alton Jones, Jr., caught 26 bass weighing 82-8 to end the day in fourth. Spokane, Washington’s Luke Clausen rounds out the top five with 25 bass weighing 78-9.

Lucas caught his 35 scorable bass from just three spots Saturday, drop-shotting a trio of Berkley baits. He caught plenty of fish on a Berkley PowerBait MaxScent Flat Worm and a Berkley Havoc Bottom Hopper, but most of his damage was done with a Berkley PowerBait The General . If competing in a five-fish limit format event, Lucas’ best five largemouth would have went for 27-14.

“Today was just an insane day,” Lucas said in his post-game interview. “I’m really, really stoked right now. I felt like I had two really good spots coming into the event, and I feel like I kind of found a third area today. Other than that, I caught some just junk-fishing around. But I feel really good with how my day went.

“As good as it was today, I do think it is only going to get tougher as the week goes on,” Lucas continued. “Catching all of these bass and not laying off of them – there is no way that this a fishery can pump out the heavy weight like it did today for every day of the tournament. It will still be really good, but I think its going to slow down a little bit.”

Lucas credited his gear as being crucial to his success, Saturday.

“The key today was my Fantasista X rod from Abu Garcia,” Lucas said. “The fish are biting really light. I’m shaking my drop-shot bait just a little bit, and I can feel the slightest tick in the line – it almost feels like a bluegill bite. But this rod is so sensitive, I’m catching them and that really was the reason why I think I caught so many, today.”

Like Lucas, Wheeler also caught and weighed all largemouth bass on Saturday. Unlike Lucas, however, Wheeler opted for a bluegill-colored Rapala DT 16 crankbait to catch his keepers.

“Man, how much fun to come up here to Cayuga Lake and smash them on a dang crankbait,” said Wheeler, the reigning Bally Bet Angler of the Year. “We never really got on them in the last period, and that was our downfall at the end. I was able to check out a few things, but it just wasn’t going down.

“I’m looking forward to the day off and getting a chance to regroup and put the full gameplan together,” Wheeler went on to say. “I’m not exactly sure how I’m going to go about this one, yet, but I’ll have it figured out by Monday.”

The top 20 pros in Group A after Day 1 on Cayuga Lake are:

Overall, there were 580 scorable bass weighing 1,877 pounds, 6 ounces caught by the 40 pros Saturday.

The 40 Anglers in Group A compete in their two-day qualifying round on Saturday and Monday – the 40 anglers in Group B on Sunday and Tuesday. After each two-day qualifying round is complete, the anglers that finish in 2nd through 20th place from both groups advance to Wednesday’s Knockout Round, while the winner of each group advances directly to Thursday’s Championship Round. In the Knockout Round, weights are zeroed, and the remaining 38 anglers compete to finish in the top 8 to advance to the Championship Round. In the final day Championship Round, weights are zeroed, and the highest one-day total wins the top prize of $100,000.

Pro Mark Rose of Wynne, Arkansas, who will be among the 40 anglers competing in Group B, Sunday, has been penalized one hour of fishing time and will begin his tournament at 9 a.m. ET tomorrow. Rose inadvertently fished one hour longer than allowed during the final day of the angler’s official practice period. When he returned to the launch ramp and realized his error, Rose immediately self-reported his violation to Tournament Director Aaron Beshears, who assessed the penalty.

Anglers will launch each day at 7:30 a.m. ET from Frontenac Park, located at 15 Creamery Road in Union Springs. Each day’s General Tire Takeout will be held at the park, beginning at 4 p.m. Fans are welcome to attend all launch and takeout events and also encouraged to follow the event online throughout the day on the MLF NOW!® live stream and SCORETRACKER® coverage at MajorLeagueFishing.com.

As part of the event, on Sunday, Aug. 7, from Noon to 5 p.m., fans are invited out to the Major League Fishing Festival at the Frontenac Park. Hosted by the Village of Union Springs, the event will feature fans meeting and getting autographs from their favorite pro anglers that compete on the Bass Pro Tour. Children are welcome to visit the Kids Zone to meet Skye & Marshall from PAW Patrol, fish for live fish in the Kids Fishing Pond, show off their artistic skills at the coloring stations, and more. Vendor booths from MLF sponsors, food, prizes and giveaways, including a FREE Abu Garcia rod and reel combo for the first 50 youth in attendance both days. One lucky attendee will play for a brand-new Toro 42-inch TimeCutter Zero Turn Mower in the Toro Pick ‘Til You Win game, with runner up prizes of a new 70-inch LED 4K Smart TV or a $500 VISA gift card. For more information on the Major League Fishing Festival, visit MajorLeagueFishing.com/Attend.

On Monday, Aug. 8 from 8 to 10 a.m., the MLF Fisheries Management Division (FMD) will be participating in a clean-up event at Frontenac Park – the FMD Costa Clean Water Matters Program.  MLF Pro Anglers and Volunteers will walk the park and shorelines to clean up trash and debris from the shores of Cayuga Lake.

On Championship Thursday, Aug. 11, from 4:30 p.m. to 6 p.m. MLF will host a Celebration Event for fans of all ages, inviting fans to come out and celebrate with the professional anglers from the Bass Pro Tour as they crown the champion of the Fox Rent A Car Stage Six on Cayuga Lake Presented by Googan Baits. Before the celebration, an MLF watch party starts at 1:30 p.m., and the first 50 middle school or high school anglers in attendance will receive a free Abu Garcia rod and reel combo valued at $100. The final 10 Championship Round Bass Pro Tour anglers will be on hand at the trophy celebration to meet and greet fans, sign autographs, and take selfies.

The Fox Rent A Car Stage Six on Cayuga Lake Presented by Googan Baits will feature anglers competing with a 2-pound minimum weight requirement for a bass to be deemed scorable. Minimum weights are determined individually for each competition waters that the Bass Pro Tour visits, based on the productivity, bass population and anticipated average size of fish in each fishery.

The Bass Pro Tour features a field of 80 of the top professional anglers in the world competing across seven regular-season tournaments around the country, competing for millions of dollars and valuable points to qualify for the annual General Tire Heavy Hitters all-star event and REDCREST IV, the Bass Pro Tour championship, which will be held next March on Lake Norman in Charlotte, North Carolina.

The MLF NOW!® broadcast team of Chad McKee, Marty Stone and J.T. Kenney will break down the extended action on all six days of competition from 7:45 a.m. to 4:30 p.m. ET. MLF NOW!®  will be live streamed on MajorLeagueFishing.com and the MyOutdoorTV (MOTV) app.

Television coverage of the Fox Rent A Car Stage Six on Cayuga Lake Presented by Googan Baits will premiere as a two-hour episode at 7 a.m. ET, on Saturday, Nov. 12 on the Discovery Channel. New MLF episodes premiere each Saturday morning on the Discovery Channel, with additional re-airings on the Outdoor Channel. Each two-hour long reality-based episode goes in-depth to break down each day of tournament competition.