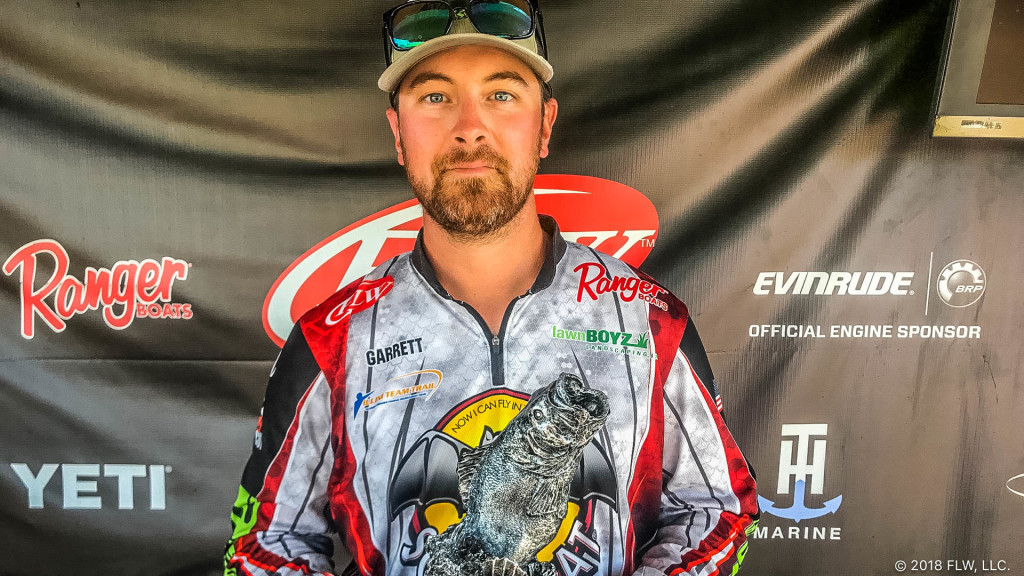 “I went from one end of the lake to the other running the backs of coves in a foot or less of water,” said McDowell, who earned his first win in FLW competition. “The water was pretty clear but  my polarized Solar Bat sunglasses were key for me. If you didn’t have sunglasses where you could see the wood on the bottom, I wouldn’t have caught what I did. A lot of the stumps were a foot or more under the water where you just can’t see them without the polarized lenses.”

McDowell said he primarily used a custom white swimjig with a White Pearl-colored Zoom Super Chunk. He also rotated in a ChatterBait with a white Keitech swimbait when he needed to cover more water, and noted that it caught one of his largest fish of the day Saturday.

“I probably hit 12 to 15 coves each day, with stumps and laydowns being the deal,” said McDowell. “I saved my southern coves for Sunday. I thought they held better-quality fish.”

McDowell said he ended up catching about eight keepers each day.

“Making multiple casts to the same target was important. Sometimes I had to cast 10 times to a stump before they’d eat the bait.”

Nick Koehne of Manteno, Illinois, caught a bass weighing 4 pounds, 12 ounces – the heaviest of the event in the Boater Division. The catch earned him the Boater Big Bass award of $532.

Lungu caught the largest bass in the Co-angler Division – a fish weighing 4 pounds, 3 ounces – and earned the Co-angler Big Bass award of $266.

The top 45 boaters and co-anglers in the region based on point standings, along with the five winners in each qualifying event, will be entered in the Oct. 25-27 BFL Regional Championship on Lake Chickamauga in Dayton, Tennessee. Boaters will compete for a top award of a Ranger Z518C with a 200-horsepower Evinrude outboard and $20,000, while co-anglers will fish for a new Ranger Z518C with a 200-horsepower Evinrude outboard.

The 2018 BFL is a 24-division circuit devoted to weekend anglers, with 128 tournaments throughout the season, five qualifying events in each division. The top 45 boaters and co-anglers from each division, along with the five winners of the qualifying events, will advance to one of six regional tournaments where they are competing to finish in the top six, which then qualifies them for one of the longest-running championships in all of competitive bass fishing – the BFL All-American. The 2019 BFL All-American will take place May 30-June 1 on the Potomac River in Marbury, Maryland.