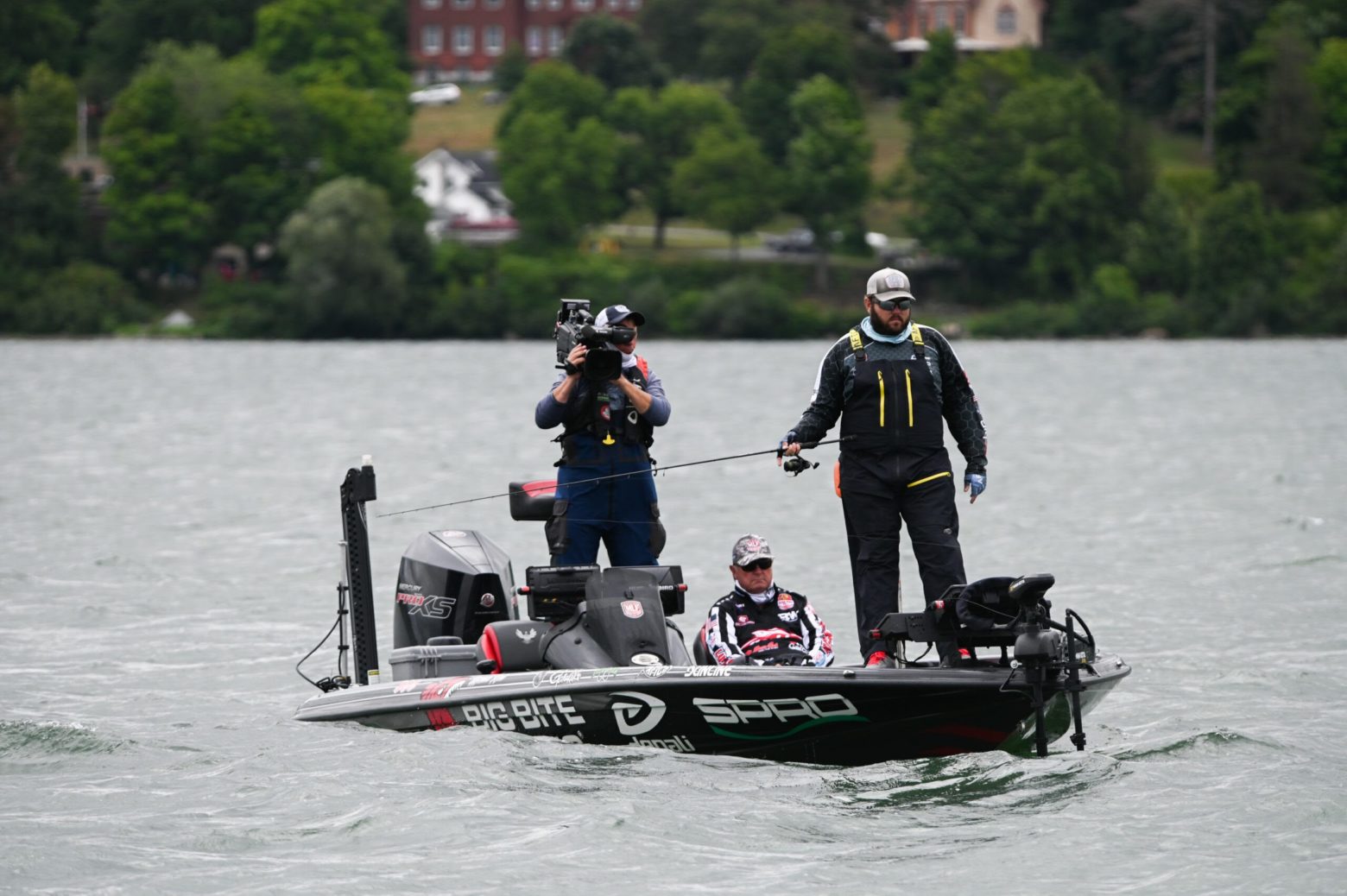 Tennessee Angler Boats Two-Day Haul of 139 Pounds, 11 Ounces to Punch Ticket to Championship Round, Field of 38 Set for Wednesday’s Knockout Round

B&W Trailer Hitches pro Mark Davis of Mount Ida, Arkansas, caught a two-day total of 37 bass weighing 127-15 to end the round in second place. Lorena, Texas, angler Alton Jones caught 39 scorable bass weighing 116-15 to finish the round in third. Both Davis and Jones held the lead for periods of time Tuesday, but both were eventually overtaken by a Neal flurry.

The remaining 38 anglers – 19 from each group – now advance to Wednesday’s Knockout Round, where weights are zeroed, and the anglers compete to finish in the top eight to advance to the Championship Round on Thursday. The Championship Round will feature Group A winner Justin Lucas, Group B winner Michael Neal, and the top eight finishers from the Knockout Round competing in a final-day shootout for the top prize of $100,000.

“I really didn’t want to catch as many as I had to today, especially at the end of the day. But I kept feeling like everyone else was catching too many for me to totally let up and go practice,” Neal said in his post-game interview. “I wish I could have. Sometimes it works out where you can, and sometimes you can’t. The good news is that I don’t think there is much else in this section of the lake for me to find, so it might have been a good thing that I didn’t have any time to go look and spread myself out even further.”

“Coming out of practice, I thought the majority of the fish that I caught during this event would be smallmouth, but after the first day of the tournament it was basically half and half,” Neal said. “I definitely didn’t expect it to be all smallmouth today. It’s always fun to catch them, though, and the last time I did that and won a round with big smallmouth was when I won last year at Lake St. Clair. So hopefully we can keep that momentum rolling, now that we’ve won the round maybe we can move on and win the Championship Round, too.

The biggest key for me today was downsizing my line,” Neal continued. “On Sunday I was using 8-pound (test) Sunline Shooter (line), but today I used 7-pound. I just feel like with as much pressure as these fish are getting, any advantage is important and I feel like the smaller diameter of that line makes a big difference.

The top 20 pros in Qualifying Group B that now advance to Wednesday’s Knockout Round on Cayuga Lake are:

This six-day tournament, hosted by the Village of Union Springs, showcases 80 of the best professional anglers in the world competing for a purse of more than $805,000. The tournament is livestreamed each day at MajorLeagueFishing.com and the MOTV app, and also filmed for television broadcast later this fall on the Discovery Channel.

The 40 Anglers in Group A competed in their two-day qualifying round on Saturday and Monday – the 40 anglers in Group B on Sunday and Tuesday. Now that each two-day qualifying round is complete, the anglers that finished in 2nd through 20th place from both groups advance to Wednesday’s Knockout Round, while the winner of each group advances directly to Thursday’s Championship Round. In tomorrow’s Knockout Round, weights are zeroed, and the remaining 38 anglers compete to finish in the top 8 to advance to the Championship Round. In the final day Championship Round on Thursday, weights are zeroed, and the highest one-day total wins the top prize of $100,000.

Anglers will launch each day at 7:30 a.m. ET from Frontenac Park, located at 15 Creamery Road in Union Springs. Each day’s General Tire Takeout will be held at the park, beginning at 4 p.m. Fans are welcome to attend all launch and takeout events and also encouraged to follow the event online throughout the day on the MLF NOW!® live stream and SCORETRACKER® coverage at MajorLeagueFishing.com.

On Championship Thursday, Aug. 11, from 4:30 p.m. to 6 p.m. MLF will host a Celebration Event for fans of all ages, inviting fans to come out and celebrate with the professional anglers from the Bass Pro Tour as they crown the champion of the Fox Rent A Car Stage Six on Cayuga Lake Presented by Googan Baits. Before the celebration, an MLF watch party starts at 1:30 p.m., and the first 50 middle school or high school anglers in attendance will receive a free Abu Garcia rod and reel combo valued at $100. The final 10 Championship Round Bass Pro Tour anglers will be on hand at the trophy celebration to meet and greet fans, sign autographs, and take selfies.

The Fox Rent A Car Stage Six on Cayuga Lake Presented by Googan Baits features anglers competing with a 2-pound minimum weight requirement for a bass to be deemed scorable. Minimum weights are determined individually for each competition waters that the Bass Pro Tour visits, based on the productivity, bass population and anticipated average size of fish in each fishery.

The Bass Pro Tour features a field of 80 of the top professional anglers in the world competing across seven regular-season tournaments around the country, competing for millions of dollars and valuable points to qualify for the annual General Tire Heavy Hitters all-star event and REDCREST IV, the Bass Pro Tour championship, which will be held next March on Lake Norman in Charlotte, North Carolina.

The MLF NOW!® broadcast team of Chad McKee, Marty Stone and J.T. Kenney will break down the extended action on all six days of competition from 7:45 a.m. to 4:30 p.m. ET. MLF NOW!®  will be live streamed on MajorLeagueFishing.com and the MyOutdoorTV (MOTV) app.

Television coverage of the Fox Rent A Car Stage Six on Cayuga Lake Presented by Googan Baits will premiere as a two-hour episode at 7 a.m. ET, on Saturday, Nov. 12 on the Discovery Channel. New MLF episodes premiere each Saturday morning on the Discovery Channel, with additional re-airings on the Outdoor Channel. Each two-hour long reality-based episode goes in-depth to break down each day of tournament competition.