David Dudley celebrates after learning he won the FLW Tour event on Beaver Lake. (Photo by Brett Carlson)
Virginia angler claims fourth tour win on Beaver Lake
29.Apr.2012 by Brett Carlson
ROGERS, Ark. – As a rule of thumb, it is never wise to count David Dudley out of any professional bass fishing tournament. At noon Sunday, Dudley only had three average Beaver Lake bass in his livewell. Reports of big stringers from Andy Morgan, Luke Clausen and Scott Canterbury made Dudley’s fortunes look bleak. Just when he was about to retreat to one of his spotted bass schools, it clicked. And then it was vintage fourth-quarter Dudley.The first fish of the flurry was a 3 1/2-pound largemouth caught on a homemade umbrella rig. Most importantly, it kept Dudley from leaving his largemouth areas. An hour later he made another adjustment, this time putting down the umbrella rig and picking up a wacky rig. After moving to a steep, wind-blown bank, Dudley caught a 3-pounder, and then shortly after a 4-pounder and another 4-pounder and it was on. When it was over, Dudley finished with a final-day weight of 16 pounds, 9 ounces. And with that, the Castrol pro put to bed any notion of the Walmart FLW Tour Major being won up the river.“The key decision was to stay on the largemouths, because I had like 10 or 12 schools of spotted bass located. It was tempting, but I knew in the back of my mind they (the spotted bass) wouldn’t play. What I did today was like hitting two grand slams in the last inning of a baseball game. It was one of the best runs I have ever been on in my life. Every choice I made was a good one.”While the umbrella rig with willow blades and swimbaits was Dudley’s main presentation, the wacky rig proved critical. Immediately after he picked it up Sunday everything changed.

In total, 13 of Dudley’s 20 fish came from the umbrella rig and seven came from the wacky rig. While many others described their umbrella-rig patterns as focused on shad, Dudley said his was random and just about every bite was a surprise. He decided to focus on the main-lake portion around Deer and Bear islands simply because he believes that’s where the greatest concentration of largemouths lives.

For those that aren’t familiar with the Lynchburg, Va., angler, his motto is “never be satisfied.” He hates to finish anything but first and frequently cites second place as the first loser. Dudley dedicated this week to his 95-year-old grandmother who is fighting for her life. Before he left for the Ozarks, his grandmother told him she’d pray for big fish. With that power of prayer, her grandson delivered.

“You can go now granny,” Dudley said via FLW Live. “This is all for you.”

While much of the attention this week once again centered on the reemergence of umbrella rigs, Dudley credited his latest victory to decision making.

“The Alabama rig works, but it’s just one tool, not a cure-all tool. Fishing is not just about skill. It’s about the mental game, the decisions. Decisions are what separate anglers in this sport.”

Dudley’s four-day cumulative weight was 54 pounds, 7 ounces and he never weighed anything but a largemouth, something that he’s never done in over a decade fishing the White River impoundment. He earned another $125,000, bringing his all-time FLW record up to $2.88 million. Counting the Ranger M1, this was Dudley’s fifth major title and fourth tour title.

Andy Morgan was steady during the first three days of competition and then made a serious run – catching 17-8 the final day to finish in second place with 53 pounds, 15 ounces. Morgan, a noted shallow-water flipper, said he has learned his lesson about heading south of the Highway 12 Bridge and fishing up the river. Instead, he stuck relatively close to the launch and fished an umbrella rig, much like Dudley. Morgan oftentimes was seen away from the pack as far east as Ford’s Creek, and thus his areas didn’t receive as much pressure.

Morgan’s umbrella rig was a smaller version made by Power Tackle called the Get ‘em Going Rig and he used Zoom Swimmin Super Fluke Jr.’s in albino color. The Dayton, Tenn., pro said structure wasn’t as important as the presence of bait and wind. He threw it shallow on the bank as well as in 7 to 8 feet of water.

“I winded it on bluff walls in the wind and on flat areas with shad,” he said. “I also threw it some on mudlines. I would say most of my fish came in the back third of the creeks. Paying attention to the wind was important, unless the shad were there, then that was the most important factor.”

Morgan’s lone FLW Tour win came at Beaver back in 2007. At that tournament, he had to scrounge up a small limit on a finesse worm. After weighing 17-8 the final day, he’s impressed with the Beaver.

“This is a new Beaver Lake. It’s back; there’s no doubt about it.”

Humble as always, Morgan took the news of his record 50th FLW top-10 finish in stride.

“That’s great, but that just means I’ve been at this a long time.”

In a normal Beaver Lake event, catching limits of 14-5 and 12-0 the final two days would be considered a success. But Luke Clausen did that this year and fell from first to third. He finished the tournament with a total weight of 53 pounds, 9 ounces, earning $30,000.

“I let it slip through my hands because I didn’t make the right decisions,” said the former Forrest Wood Cup and Bassmaster Classic champion. “I probably had too much confidence in my areas today and should have ran some other water. I just couldn’t generate much for bites.”

Like Dudley and Morgan, Clausen was on the umbrella-rig main-lake program. He used a compact umbrella rig, 3-inch swimbaits and 3/16-ounce jigheads.

“In the morning I would start on steeper rock bluffs in 8 to 12 feet of water. As the day wore on I would gravitate to more flat, shallow stuff like pea gravel bank.”

Clausen said he got on the umbrella-rig pattern late during his prefish and essentially practiced all week.

“The more I learned the deeper I fished, especially in the morning. But that didn’t hold up today.”

Clausen’s next challenge will be to defend his Potomac River title from 2011.

Just as he did on day three, Scott Canterbury caught the fire out of the bass today. The only difference was that he didn’t get the big kicker bites. He still managed a limit weighing 10 pounds, 8 ounces, pushing his total weight to 52 pounds, 13 ounces. The Straight Talk pro earned $25,000 for fourth.

“I probably caught 30 fish again today, just not the right ones,” said the Springville, Ala., pro.

Earlier in the week he sampled Prairie Creek, but Canterbury immediately ran south to War Eagle Creek this morning. While he caught several keepers right away, he noticed the presence of shad was largely gone.

His bread and butter was the smaller version of the Swim N’ Frenzy, the same umbrella rig Spencer Shuffield took second with on Table Rock Lake, but with Berkley Hollow Belly swimbaits. During his big-fish flurry on day three, Canterbury caught a 4-pounder on a Jackall Bowstick and a 4-pounder flipping a jig with a Sasuteki craw. The day-three leader would cover water with the umbrella until he encountered certain lay-downs he wanted to flip.

Canterbury said after weigh-in that he fished his hardest and has no regrets. He did lose a 2 1/2-pounder late in the day that would have moved him up, but wouldn’t have overcome Dudley.

“You want to win when you get in position, and believe me I want it bad. Coming into this week I just wanted to make a top 50 because I’ve never done that here before. Now I’m actually looking forward to coming back.”

“I started back in War Eagle Creek like I had been doing the past three days but it wasn’t working,” said Browne. “At noon, I didn’t have a keeper so I scrambled and went up further up the White River.”

Browne instinctively surveyed the area with a Super Spook Jr. topwater bait and never had to put it down.

“After that, I just whacked them. I probably caught 25 fish in the afternoon. I wish I would’ve gone there earlier.”

Most of the week Browne threw a 1/2-ounce Screamin Eagle spinnerbait made by War Eagle. He’d cover water until he came up on an appealing lay-down, then he’d flip with his signature black and neon Gambler tube. The specific area Browne targeted is known as the 50-cent hole.

“Today I only caught one flipping and the rest came on the topwater.”

Rest of the best

Rounding out the top 10 pros at the FLW Tour event on Beaver Lake:

The next FLW Tour event is slated for the Potomac River in National Harbor, Md., May 17-20, the fourth of six Majors.

Special thanks to Everyone at FLW.com 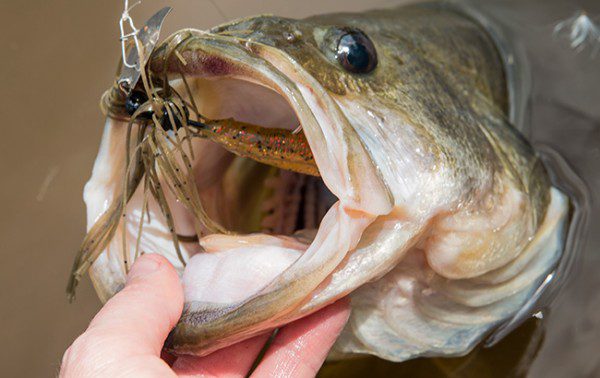 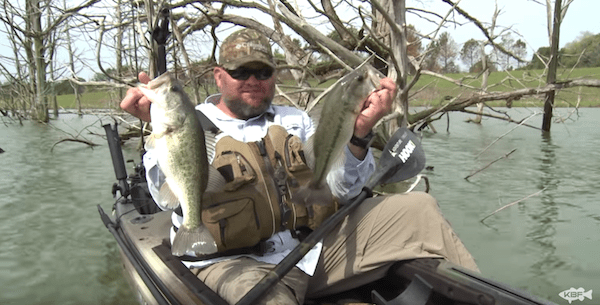 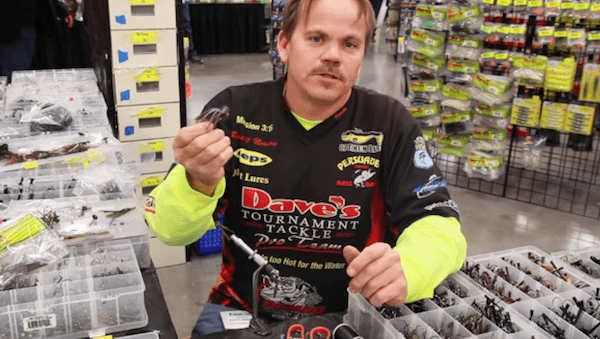 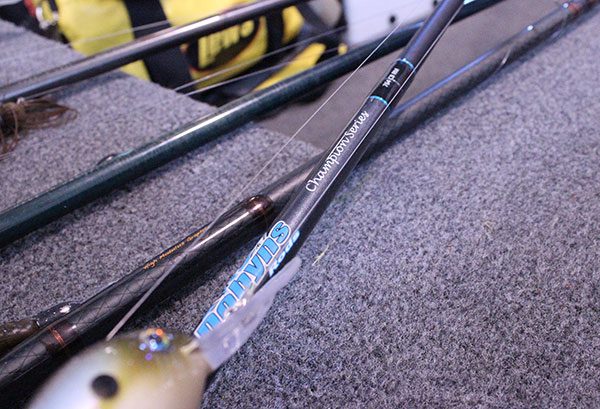