In every sporting event, there comes a moment.

It is when the bat comes off the shoulder of The Babe, and his eyes bore into the pitcher.

It is when the back foot plants, the front foot hits earth and Montana raises the football.

It is when the tongue comes out and both feet leave the paint as the light comes on a moment after the basketball leaves Jordan’s hand.

It is when the crowd goes silent.

It is when the air is sucked out of the arena.

It is when all you can do as a fan is put your hands on top of your head…and watch.

In every sporting event, there is a moment.

A moment that a few rise to.

A moment that many shrink from.

It is the moment that halls of champions are built for.

It is the moment, that is bronzed.

It is the moment, that becomes timeless.

It is the Moon Landing.

“…but damn the game
If it don’t mean nuttin…”

There is only one pitch I would throw to Babe Ruth.

Straight, waist high, right down the middle of the plate.

Does he walk off the field as George.

Or does he cross the chalk lines as…The Babe.

When the win is on the line, who steps up.

The man with the bat.

Or the man with the ball.

It is that moment that most interests me about sports, about life. To understand that moment, and what controls it, or who it controls…defines success…

What inside made George Herman Ruth…The Babe.

What inside made Walter Payton…Sweetness.

What inside made Richard Petty…The King.

What is it exactly, what is it inside that makes a tall skinny guy named Kevin Van Dam…KVD.

I can’t pitch to The Babe

I can’t race The King.

He has the manor of an insurance agent. Got the look as well, that mid-fashion look, not on the edge of anything, squarely, middle.

He is very disarming, nice even, smiles a lot, winks a lot, well spoken, firm handshake, not stinky, accommodating.

If he showed up on your door asking for your daughter’s hand, you’d say yes, and then alone that night in the bathroom you’d be jumping all up and down so happy that your baby didn’t marry the guy down the street who has a third eye tat on his forehead and wears a cape around town.

But trust me…I don’t buy a moment of it.

I don’t because I know this…KVD, he got game.

He is the sheep that ate the wolf.

I can’t judge KVD as an angler and, personally, I buy none of this stuff of best of all time of KVD, or any athlete in any sport. Apples. Oranges. Best of this or that sporting event, certainly, best of his exact moment in time, maybe, best of all time, impossible to judge.

Take the top 10 all-time lists and put them under the parakeet in the cage, ’bout the only thing they are good for.

So when it comes to KVD’s fishing ability, I have NO OPINION. Couldn’t possibly, since I don’t do it, and truthfully, honestly, don’t care about it, but understand this, I respect him immensely.

If there is a Got Game Hall Of Fame, his bust better be right inside the door.

Right there, next to mine.

Me, who stuffed the wolf, and sautéed the sheep.

Heat, chest high…show me what you got Mr. The Babe. I’m going to throw so hard and inside on you that I will trim your chest hair.

Mr. The King…I will start taking off your paint in turn one, lap one, and by turn 4 lap 499 you going be nothing but primer.

And Michael, at the buzzer, you’ll be on the bench.

As my friend ex-Pittsburgh Steelers QB Mark Malone once said, “The thing with Barone is that his brain thinks it’s attached to a 6-foot, 4-inch, 250-pound Middle Linebacker…”

My GAME is attached to a short, bald, fat, smelly, arthritic old guy.

My GAME, unfortunately is attached to…me.

My mind has got GAME, my body has got…GRIEF.

My mind takes me to lots of places my body would rather not be at. The Middle Linebacker within…the towel dude outside.

So me as the Middle Linebacker goes up to KVD and says exactly this, “I can beat you.”

KVD looks down at the towel boy me and smiles, winks, gets even skinnier and less smelly and says exactly this, “bring it db, bring it.”

And I will…both of me.

Now, if I was KVD…tall…not smelly…skinny…sort of still young…perfect hair and teeth…I certainly wouldn’t be much concerned about this affront to my manhood…what with looking down at the dude GAMING me…I would probably just forget about the whole thing and buy the dude another much-needed Margarita.

But (now I’m back to being me and not KVD) KVD has no idea of my Middle Linebacker within and that I’m standing there looking at him, up at him, as just another Running Back about to fumble. About to be going to the sidelines looking out his ear hole.

Except…ah…we are in a bowling alley.

And he is standing there in bowling shoes with FLAMES on them.

And he is standing there with not ONE but TWO of his own bowling balls.

But, I have a bowling shirt on…and embroidered over my high cholesterol clogged heart is exactly this “KINGPIN.”

Even though I’m not sure what KINGPIN is and I haven’t bowled this…CENTURY.

This is event one of db vs KVD…my first pitch to Babe Ruth.

I’m trying to bend over and get the bowling shoes on, “Huh.”

…I go with an orange one that says “House Ball.”

KVD’s bowling balls go by, “Road Hawg,” and some sort of “Doom…” thing.

Me as the Middle Linebacker could care less.

Me as the towel boy…is considering throwing it in.

“How about this db…two games, first one practice, second game it’s on.”

My Middle Linebacker within sneers at him. Looking for a place to spit. Looking to be taped up.

Somehow I get the bright orange “House Ball,” down the lane without ripping out my shoulder…my elbow…the rings on my bowling hand and I jump to A LEAD on KVD.

Then it happens…the real game…and about the 4th or 5th frame…KVD jumps out to a big lead, and I can’t catch him.

The Middle Linebacker within is in the locker room banging the helmet against the lockers.

The Towel guy is looking for a Margarita.

But both of me, are smiling.

I got a glimpse of the KVD usually reserved for the Elite anglers.

And both of me am thinking this.

I can take him.

“…In life
behind the game…”

KVD is absolutely right…practice is practice. There are no Practice Hall Of Fames.

I stink at practice anything, I don’t show up, I’m mainly a Game Day player, I never did my homework, just showed up for the final exam. Explains why I had to take English 10 three times in high school, huh.

During our first game, I really felt nothing from KVD. There was a lot of winking by him at me, a lot of fist pumping, a lot of words of encouragement to me and self-deprecation of himself.

Then the “real game” began and I jumped to an early lead. 46 to 35. And the Middle Linebacker within stood waiting, stood waiting for what I knew was coming…student body right.

And come it did.

By the 4th or 5th frame in the “real game” KVD jumped out to a lead and after he put up back to back strikes, I couldn’t catch him.

But the moment he made that first strike…GAME came.

It was beautiful to watch. His face got tighter, his movements quicken, he still smiled and winked at me, but in rare glimpses as we made eye contact, I saw the hawk looking at the mouse.

I’m beginning to understand him…learning how to pitch to The Babe.

I want to understand from the best.

I want to learn from the best.

And then I want to crush the best.

KVD has an innate ability to sense the moment of change, and to seize it.  I have always believed that you only have to win one lap, the last one, be in place to do that, to seize that, and you will raise a lot of trophies.

Frame 5 through 8ish, a magic moment for me. Do I think KVD held back in the “practice game” or the “real game,” nope.

He stunk in both of them when trying to hit just one or two pins that were left standing. His first shot, the power shot, the speed of the ball going down the lane was always his best shot.

I could match him going after 1 or 2 pins at a time…I could not match him in power.

Sitting there talking after the game, of which he failed to inform me beforehand that he took a course in bowling in college, was special, because he was once again, Nice Guy KVD…whom I like.

But it is the sheep who ate the wolf that I love.

And that’s what the Middle Linebacker within, will key on.

Taking place at either Elite event #5 at Toledo Bend, or Event #6…the Mississippi River Rumble in La Crosse, Wis.

The towel guy isn’t throwing anything in.

The Middle Linebacker within now knows when to expect the handoff. When it starts to go his way, stay in the game until then, but this time plug the hole in the line.

Make him come right at me…or bounce right or left looking for daylight.

I want to take the time right here to give a public shout out to Kevin VanDam…for going along with all this…only the best amongst us, only the classiest amongst us, does stuff like this…so kudos to KVD…and Thank You.

But know this…don’t hold back on me for a minute…because I’m picking up on your “keys” and I’m coming for you…as you will be coming for me.

WE both, expect nothing less.

Babe Ruth…1 jacked out of the park. 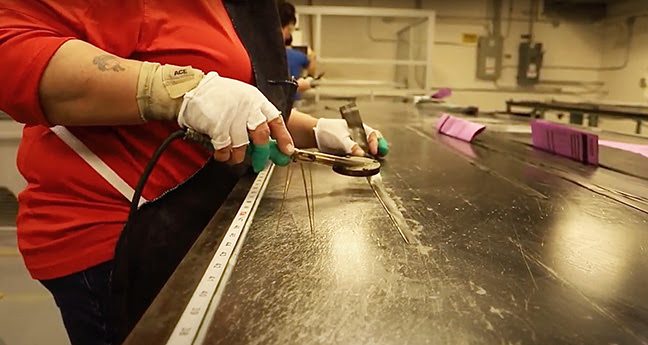 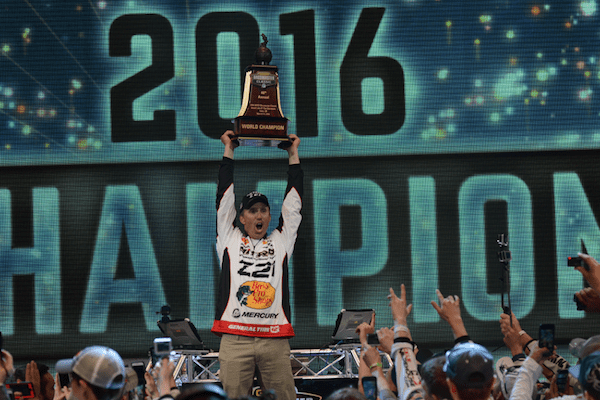 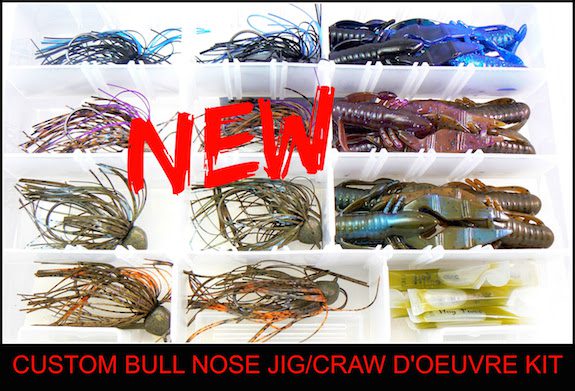 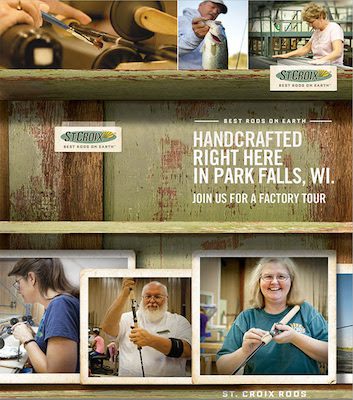