Old man winter just will not give up!!!!! After a couple March snow storms and fluctuating water temperatures, the fish are trying to get into place for what is expected to be a very good spawn this month.

Here at Fish Tales, we are just about 100% stocked on fishing tackle. Still to come in are the new Rapala Scatter Rap’s. We also have a great selection of Lew’s reels and TFO Gary Loomis rods. Stop by and see either Dave or myself to get an on the water demo.

Another new bait that I have been using with much success is the Rhino Tuff Custom Crankbaits 110 Jerk Bait in the Crafty Black Crappie color. This bait is available from them in 2 shades of this color, lite and dark. It is painted to resemble a Black Crappie, at the current time the “LITE” is working better for me. As the crappie get closer to the spawn, they get very dark in color, so I will switch over to the dark. We also have 1.5 & 2.5 Square bill crank baits coming in in both of these color patterns. The 110’s will be available at Fish Tales on or around April 6. The Squarebill’s will be in about a week or so later.  Check out Rhino’s other bait selections and colors.       www.rhinotuffcc.vpweb.com  Tell them that CCBASSN sent you. 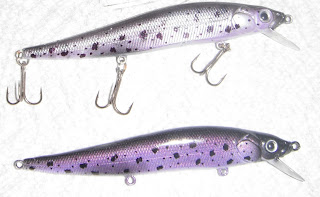 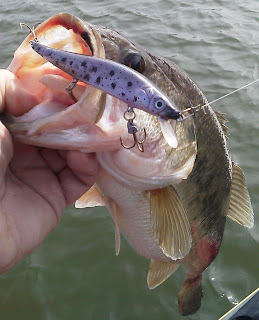 Bass- Start looking for the largemouth to be getting frisky and moving to the shallows. At the current time, I am catching them on the first break line off of the shore (4-10 feet). Run your baits parallel to keep them in the strike zone longer. When you catch a fish, slow down and picthe area apart. There is usually more than one fish because they come up to the shallows in small groups at this time of year.

With the water temps still being below 50 around much of the lake, the jerk bait bite is still going strong. It will continue with the Rhino CBC into next month as long as the crappie are shallow and spawning.

Scrounger heads dressed with a Power Team Lures Hammer Shad or a CC Minnow is another great way to get these sluggish fish to bite. When using the Scrounger, if you feel the vibration stop for any reason……….SET THE HOOK!

These are my two favorite ways to catch fish early in April. There are many ways to catch them, shallow crank baits, spinner baits, jig & pig combo’s and shakey head rigged plastics will all work for you. Later in the month, I start leaning to soft jerk baits. Burton Minnows, Zoom Super Flukes and even the Old School Slug-Go. I rig these weightless on a Gamakatsu 4/0 EWG hook. Pay close attention to your bait and fish it all the way to the boat. Bass will follow the bait deeper in the water column and when it starts rising up because you are getting close to the boat, they will attack.

CRAPPIE- The Specks at the current time are still holding in a late winter pattern around the bridge pilings, rock piles and brush piles. Some fish have started their move towards the shallows though. Fish Tales had several reports over the last weekend in March of shallow fish.

Small minnows rigged on slip bobbers will work great all month and allow you to easily change your fishing depth. Small tubes and grubs rigged on 1/16oz jig heads fished around boat docks, willow grass, beaver huts and bridge pilings will catch fish for you. A favorite of mine are the Kalin 2″ Triple Threat Grubs and the Bass Assassin Tiny Assasssins. When the fish are more active, the curly tails of the Kalin’s will work best. After they slow do, go to the smaller Bass Assassin to provoke a strike.

I still have a few days left in April to get in on the action. My associate Brian has several days open at this time. We can also do trolling trips for Crappie if that is what you are in to.

STRIPER- The striper’s are making their move up in the rivers on the annual spawning run for the spring. Look for the to be above the 522 bridge in the North Anna arm and from the S-Turns all the way to 522 on the Pamunkey side.

The water is very stained up there so live bait will work the best for you. Gizzard Shad will be the bait fish of choice for them. If you want to fish artificial baits, large swim baits with a big paddle tail to disturb a lot of water. My choice with these are the Power Team Lures 4.8″ Swinging Hammer rigged on either a Gamakatsu 4/0 or 5/0 belly weighted swim bait hook.

Around the middle of the month, look for active fish to be in the current at Dike 3 chasing Blue Back Herring that are spawning. My lure of choice is a Cotton Cordell broken Back Redfin. Just make a long cast, hold the rod tip around the 10-11 o’clock position and reel it in slowly. This will make a wake on the surface as the bait slowly walks from side to side.