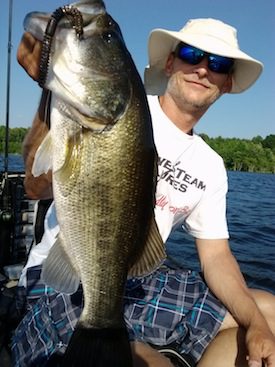 When most people think of drop shotting, 4 to 8 lb line, tiny hooks and small baits come to mind. But drop shotting doesn’t have to be as “finessy” as most think. Granted the technique was originated as a means to catch pressured or negative bass, but the actual drop shot technique is just a method to present your bait so that it hovers slightly off the bottom. The rule book never stated “Your bait and hook have to be tiny!”. So what if you’re in a situation where you have negative fish that are either buried in or close to snaggy cover such as thick brush, stacked laydowns or standing timber? Tossing an exposed hook and light line into the cover can be a recipe for disaster. So what do I do in these situations? I go in after them…but I use the correct gear to get them out. My set up for fishing this way consists of a 7’3” Medium action spinning rod and a reel spooled with 20 lb braid topped with a 8 foot section of 12 lb Fluorocarbon leader. This combination gives me just enough strength to successfully work (not horse) the bass out of the wood. As for the business end, I opt for a Sick Stick in green pumpkin with purple flake for two reasons. 1, because it’s a very natural looking color and looks like a fat night crawler to the bass. 2, with subtle movements of the rod I can make the offering appear as a super easy meal to catch, and eventually tease the bass into submission. Now for the hook and rigging for this type of cover; I tex-pose the Sick Stick on a 2/0 EWG regular wire hook and make sure the point of the hook is buried well into the bait to prevent getting hung up in the wood. I use the same knot you would use for standard drop shotting (Palomar knot then run the tag line back through the eye). The 2/0 EWG hook gives me a deeper hook set plus it also allows me to set the hook much harder so I can get the bass’s head facing in my direction to give me a jump start on getting them out of the cover. I generally start with the hook about 12 to 16 inches above the drop shot weight. So let’s move forward to “working” the bait. Remember, we’re after negative or pressured bass that have a strike zone that’s very small (small as in an arm’s length away). The only way you’re going to get the bass to strike is to keep the Sick Stick in the strike zone long enough for that bass to finally break down and eat it. Soaking the bait (motionless) in the same spot for minutes at a time followed by a couple really slow, lazy twitches, and then soaking again will make the temptation too irresistible to pass up. With enough persuasion, the bass will eventually move up and engulf the bait. But if you work the bait out of the strike zone too quickly, you just blew your opportunity on a catchable fish. And this is where Hog Tonic plays a major role in this game. I don’t just want the bass to strike the Sick Stick, I want them to lock onto it. So every bait I throw has been marinated in Hog Tonic for several minutes if not hours before use. A lot of the times in these situations the hits will be extremely subtle and I want the bass to hold on long enough for me to detect the fish and have time to rear back on them. So now the fun begins! Once I give them a stout hook set, I keep my drag set just heavy enough to give me just the right amount of power to more or less “guide” the fish out the cover with authority vs trying to horse them like I had my flipping stick in my hand. The heavier line definitely allows me to put substantial pressure on them while the long 7’3” medium action rod has enough play in it to prevent me from bending out the hook during the tug-of-war in the cover. The technique is definitely rewarding if you can discipline yourself to do so (see the attached video which was filmed in 20 ft of water in standing timber…out of a kayak!).

So at the end of the day, what’s the moral of the story for all of this?  It’s simple! Keep an open mind and think outside of the box! Get out of your comfort zone and tweak techniques to suit the situation and conditions your dealt with even if it means going against the grain. Don’t be the person that says “Hey, I wish I would have thought of that”. Be the creative one and beat the fish at their own game! A very wise and experienced angler once said “The fish are always there. If you didn’t get bit, that just means you weren’t smart enough to figure them out that day”. So don’t let the fish outsmart you. I mean, after all…they’re just fish right? 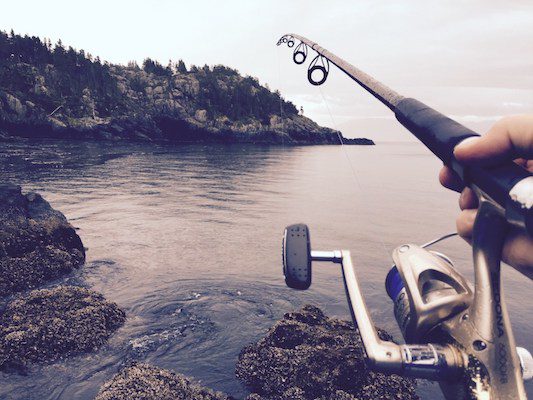 Every Bass fisherman is looking for the perfect Rod and Reel. Get them the perfect gift. By Amran November 14,2016

LIVETARGET’s Swimbait Secret is Out By FTR Staff February 22, 2017 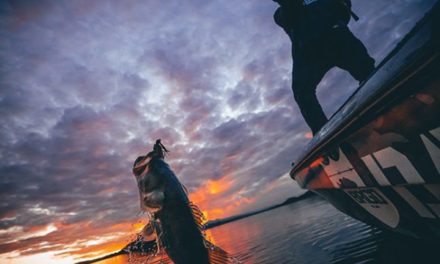