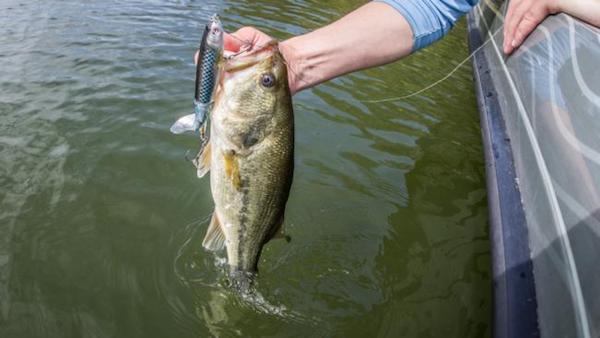 The hottest new lure on the market, but does it deserve all the hype?
The River2Sea Whopper Plopper

[print_link]
By far one of the hottest and most popular lures of the 2016 fishing season has been the River2Sea “Whopper Plopper”. Designed by legendary angler and TV personality, Larry Dahlberg, this bait has taken the fishing world by storm as the answer to top water fishermen’s prayers as it has already proven itself to catch big bags of bass with a handful of tournament wins already credited to this bait on the FLW tour. The question still remains, what makes this bait so appealing and is it as amazing as the bass fishing world makes it out to be? Let’s dissect the pros of and cons of this hot bass catching prodigy bait.
The Whopper Plopper is a hybrid between a buzz bait and a Heddon Spook. It has the body of a Spook but a propeller on the back that “whoops” water abundantly when reeled in, the faster it is reeled, the more water it disrupts. However, unlike a skirted buzz bait, the Whooper Plopper is a hard body bait that contains two treble hooks that vary in size depending on which size of the bait you select. Much like a classic “Devils Horse” top water bait, it has the advantage of being able to disrupt water at great speed to trigger a reaction strike, but also the ability to stop and be worked like a Spook for suspended bass, if the situation calls for it. This may seem like the best of both worlds, and in fact it is, but it does come with the disadvantages of both worlds as well. The biggest advantage of the Whopper Plopper is being able to fish it like a buzz bait or like a walking top water bait without having to change lures. This makes it very versatile and allows anglers to make adjustments very quickly. It is also an excellent lure for covering large areas of water quickly and working specific pieces of structure more thoroughly because of its versatility and the ability to change its retrieve speed on command without the lure sinking. One of the most appealing aspects to anglers about the Whopper Plopper is its ability to be successful in both wind and completely calm water. As an angler, we usually view wind and top water fishing in two ways as a generic rule; if there’s light wind causing a ripple on the water surface, we fish buzz baits, and if the water is completely calm, we fish walking or popper baits. The Whopper Plopper eliminates the need for both of those lures with this pattern altogether because it has the ability to do both! Since it is a buzz bait and a floating hard bait, it can be reeled in quickly with wind and light ripple on the water to create a wake for the fish to see, or reeled slowly and worked like a Spook in the calmer water to make a more subtle approach. River2Sea currently offers the Whopper Plopper in 17 colors, which cover a variety of different forages. Although the color selection is not as overly broad as anglers (including myself) would like it, it does cover most of the basic bass forages and some other unique colors as well. Since it is top water bait that is imitating baitfish, the natural shad colors such as River2Sea’s “Munky Butt” color would have to top my list for a favorite color with a fairly impressive finish and would excel in clear water. Although the “Phantom Shad” color is a close second for imitating a shad and the “Loon” color is an excellent choice for a super bright sunny day.
Sounds like the perfect top water bait right? Well, it very well might be! However, there is no such thing as truly perfect. As a cross between a buzz bait and walking bait, it does share the minor disadvantages of both those two styles of baits as well. Perhaps the biggest disadvantage is for the bait is the simple fact that it has treble hooks like the Heddon Spook instead of a single hook like buzz baits. Treble hooks are infamous for losing fishing and definitely make landing fish more difficult, although it does make the bait more likely to snag a swiping fish. Having to use treble hooks on the bait also makes it slightly more difficult to fish it in heavy grass and lily pads, as the treble hooks will naturally grab grass onto the bait much more than an up facing singular hook on a skirted buzz bait would. This would make a regular skirted buzz bait more favorable than the Whopper Plopper in thick vegetation for that reason alone, although it will still excel in lighter vegetation that it can make its way through without grabbing big piles of grass with its hanging treble hooks. My advice is to change the treble hooks on the bait right out of the package and upset them one size from the stock hooks to increase the chances of landing and holding bass more efficiently.
The advantages far outweigh the disadvantages with this very versatile and popular new bait, and it’s no wonder it has become such a hot lure on the pro tour and in local tournaments around the nation in the top water seasons. Before you go out and buy one to try for yourself though, as with any lure, it is important to have the right rod, reel, and line setup for the bait! Because the Whopper Plopper has treble hooks, my suggestion would be a 7+ foot rod with medium action and a moderate fast tip to allow some give to keep from ripping those treble hooks out of the bass’s mouth (much like a with a Zara Spook or a crankbait rod). A fast gear ratio reel is suggested so you can take up the line quickly and “burn” the Whopper Plopper easily across those large areas of water if desired, and because it’s a floating bait, you will want to use 15-20lb monofilament for the smaller size Whopper Plopper, and I suggest braided line for the largest size Whopper Plopper. Only time will tell how successful the Whopper Plopper will be in the coming years. New lures come and go quickly in the sport of bass fishing because bass get condition to these new baits if they are overfished in a few seasons and these new baits become old fast. Few lures stand the test of time season after season and go down in history as those classic fish catchers that even the most avid of anglers have confidence in. The River2sea Whopper Plopper comes at a high price, selling currently for $16.99 on TackleWarehouse.com and even more for the larger version, so you will need that confidence to pay the big dollars for this lure!
Does the Whopper Plopper deserve all the recent hype it has received? Absolutely, it has shown to be the hottest and most versatile top water bait in 2016 and should definitely be a bait to try if you’re a tournament angler or an avid angler wanting to catch more and bigger top water fish in the warm weather.
Will the Whopper Plopper be as successful as it has been in 2016 in years to come?
Only time with tell, but right now it is definitely the go to bait in tournaments where bass are hitting top water lures, and who knows, one day the Whopper Plopper just might be one of the lures of legends all anglers around the world know and kids around the nation catch their first fish on.