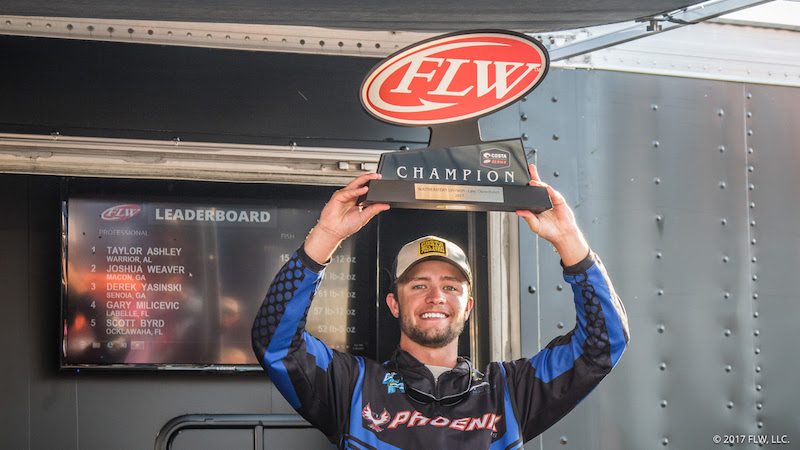 “I’m feeling pretty great right now,” said Ashley, who became the third-youngest boater to ever win an FLW Series event. “All of my fish came from one area of the lake, on the south end. It wasn’t my original plan to fish there but the adjustment ended up being the biggest of the week.”

Ashley said his area – which spanned between 500 and 600 yards – was littered with reeds and lilypads. He said he caught 95 percent of his bass throughout the week on a 3/8-ounce Dirty Jigs No-Jack Swimjig.

“I swam it along the edges of the reeds and cast it as far as I could in the pads,” said Ashley. “Everybody that was watching me fish said I was doing something called the “Alabama Shake”, which means that I was shaking the lure while swimming it. I threw it in both green-pumpkin and white colors, but most of my big bites came on the white.”

Ashley’s heaviest five-bass limit weighed in at 25 pounds, 6 ounces, on Friday. He noted that those five fish included his most crucial catch of the week.

“I hooked a largemouth in the lilypads and the bait popped out of her mouth just as my co-angler dipped the net under to grab it,” said Ashley. “She was buried under a bunch of pads in the net and ended up being a 7-pounder. That definitely was my anchor for the tournament.”

The top 10 pros on Lake Okeechobee were:

Holder caught a big largemouth weighing 10-pounds, 8-ounces Thursday – the biggest bass of the tournament in the Pro Division. For his catch, Holder earned the day’s Boater Big Bass award of $300.

Howard Poitevint of Bainbridge, Georgia, won the Co-angler Division and $34,700, including a Ranger Z175 with a 90-horsepower Evinrude outboard motor. Poitevint earned his win with a three-day total catch of 15 bass weighing 46 pounds, 13 ounces.

The top 10 co-anglers on Lake Okeechobee were:

Alonzo Evans of Sebring, Florida, caught the biggest bass of the tournament in the Co-angler Division Thursday, a largemouth weighing 10 pounds, 5 ounces that earned him the day’s Co-angler Big Bass award of $200.

The Costa FLW Series on Lake Okeechobee was hosted by Roland & Mary Ann Martin’s Marina & Resort and the Hendry County Tourism Development Council. It was the first Southeastern Division tournament of 2017. The next Costa FLW Series tournament will be the Western Division opener, held Feb. 9-11, on Lake Havasu in Lake Havasu City, Arizona. For a complete schedule, visit FLWFishing.com.