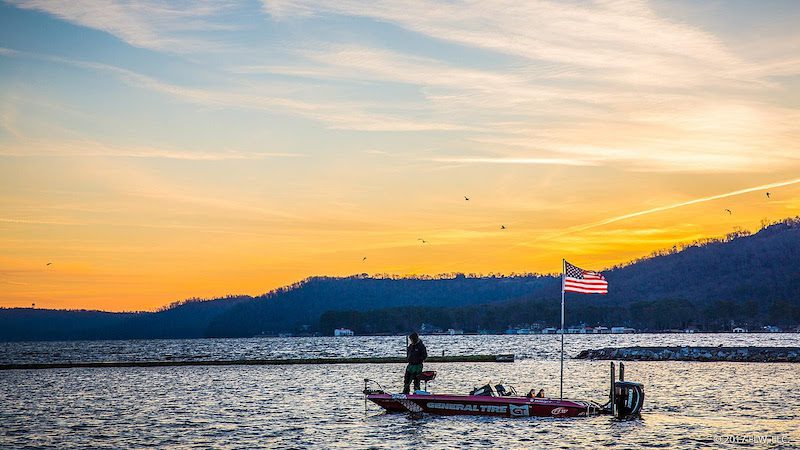 GUNTERSVILLE, Ala. (Feb. 15, 2017) – YETI FLW College Fishing is heading to Lake Guntersville Feb. 25 for the second of three regular-season stops in the Southeastern Conference. A full field of college fishing clubs will be competing for the top award of a $2,000 club scholarship and a berth into the 2018 College Fishing National Championship.

According to Costa FLW Series pro Casey Martin of New Hope, Alabama, who operates a guide service on Lake Guntersville, the bite on Lake Guntersville is picking up as the weather has stabilized. Water temperatures are slowly warming – currently hovering around 54 degrees – and the bass are starting to feed as they prepare for the spawn.

“The grass bite is by far the most consistent, with a good number of 2- to 4-pounders grouped up,” said Martin. “The fish seem to be moving around day to day in the grass, but covering water you can find them actively feeding.”

Martin said that he has had the most success throwing a ½-ounce red- or natural-colored Rat-L-Trap or a Picasso Lures Double Barrel Underspin with a swimbait trailer, but that crankbaits and umbrella rigs would also be heavily favored amongst tournament competitors.

“I think the winning team is going to weigh in a five-bass limit worth 27 pounds,” Martin went on to say.

Anglers will take off from Lake Guntersville State Park, located at 7699 Alabama Highway 227 in Guntersville, at 7 a.m. CST Saturday. Weigh-in will be held at the State Park beginning at 3 p.m. Takeoff and weigh-in are free and open to the public.

Schools are allowed to register up until the morning of the tournament. Entries may be made either by phone or at CollegeFishing.com.

Schools registered to compete in the Lake Guntersville tournament, which is hosted by the Marshall County Convention and Visitors Bureau include:

Calhoun Community College – Denver Satterlee and Jonathon Tilley, both of Athens, Ala.

Faulkner University – Joseph Lacy and Breanna Wyatt, both of Pell City, Ala.

Huntingdon College – Bennett Brantley and Dustin Watson, both of Montgomery, Ala.

Snead State Community College – Grant Garner and Kolby Childers, both of Sardis, Ala.

University of Alabama – Grant Larson, McCalla, Ala., and Michael Grow, Brookwood, Ala.

University of Alabama-Birmingham – Jacob Burns, Morris, Ala., and Chris Hiott, Trussville, Ala.

University of Alabama-Birmingham – Hayden Carnell, Cropwell, Ala., and Joshua McQueen, Moody, Ala.

University of South Carolina – Austin Bradberry and Dalton Tumblin, both of Williamston, S.C.