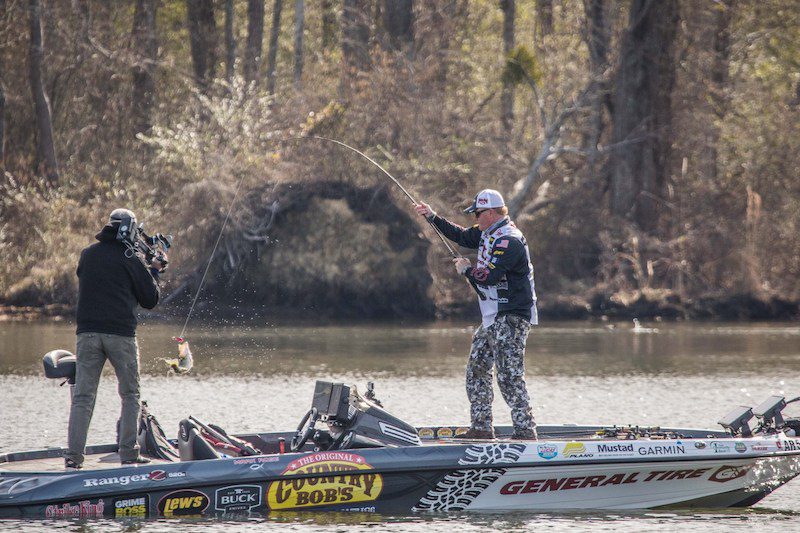 Its official, Mark Rose is the first FLW Tour angler in the 20 year history of the FLW Tour to win back-to-back events. Yes, there have been anglers to win back-to-back events of a given stop like Guntersville, but never 2 consecutive stops. At the FLW Tour presented by Quaker State on Lake Travis, Mark proved that he wasn’t just a Tennessee River winner. What an awesome finish too.
On Guntersville, Bryan Thrift was sitting in the hot-seat as Mark came to the stage for the final weigh in, watching as Mark knocked him into second by a mere 15 ounces. This time, Mark was on the hot-seat as Bryan came to the stage. Watching live as he lifted his 5th bass out of the bag, everyone knew it was going to be close. While he got closer this time, he was just 12 ounces from returning the favor and knocking him off the hot seat. We will just have to wait and see if we can have the first 3 time winner or if we will have a new winner on the Harris Chain on March 9-12, 2017.
The cream always comes to the top? The only thing I know is that cream mixes into the coffee and if it comes to the top, you better not drink it. Maybe it’s the bad is always visible? But in bass fishing, the cream of the crop is always hanging near the top of the ladder or leader board. But what happens when you are fishing in a stacked field? The FLW has always had an impressive line-up of Pro Anglers; Mark Rose, Bryan Thrift, Scott Martin, Anthony Gagliardi, Clayton Batts, Andy Morgan, Clark Wendlandt, and David Dudley to name just a few. When you are fishing with anglers that are proven winners it is so difficult to be THE WINNER every time. How often does it happen?
We go out and fish ourselves, so we know what it is like to get into a groove. When we are on a pattern that just works where ever we go that day, it is an amazing day. But we also know it’s not always that simple. We don’t always find a school of bass locked onto a point where we literally catch them on every cast. It is amazing when it happens, but we never go out knowing it will happen, it just happens.
Weather, health, and other factors play a big role in fishing. A cold front moves through the night before a tournament and shuts down what we found the day before, we are sick as a dog and have a difficult time keeping our head in the game, you name it and it can happen. We have a choice as weekend warriors, if it’s just fun fishing, we can go home, but when it’s a tournament, we do our best and let the cards fall as they will. We don’t give up, we fight through the difficulties. Andy Morgan, the reigning AOY for the FLW did just that. Sick as a dog, his wife drives him to the tournament so he could compete. He finished 7th on Lake Guntersville, but could only muster a 90th place finish on Lake Travis. He didn’t give up and go home after the first day, he stuck it out. He didn’t take a sick day or a personal day off, there is no such thing in the tournament world. He took a hit in the Angler of the Year race, but he knows anything can still happen. We don’t look back, we don’t give up, we keep learning and we keep moving forward.