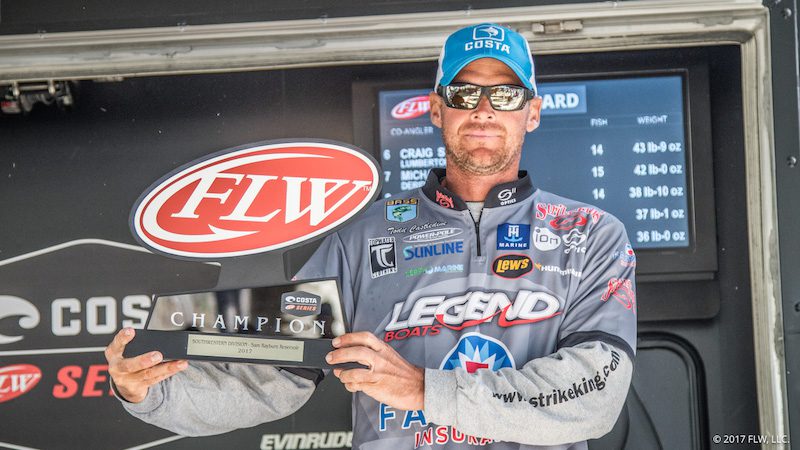 JASPER, Texas (Feb. 25, 2017) – Texas pro Todd Castledine of Nacogdoches, weighed a five-bass limit totaling 27 pounds even Saturday to vault to the top of the leaderboard after starting the day in ninth place and claim top honors at the Costa FLW Series Southwestern Division opener on Sam Rayburn presented by YETI. Castledine’s three-day total of 15 bass weighing 66 pounds, 11 ounces, was enough to earn him the win by a 3-pound, 11-ounce margin and a check for $50,500.

“I spent the first two days of the event sight fishing, and all of the fish that I weighed, I was looking at,” said Castledine, who pushed his career earnings to more than $230,000 in FLW competition. “Today, I was out of sight fish and just went fishing. I had a good day and had 16 or 17 pounds early, and I caught around 11 keepers.

“I was running all over the lake, and I stopped on this deep spot with 20 minutes to go in the day and made one cast,” Castledine continued. “It didn’t feel good, so I reeled up and told my co-angler that we were moving. I decided to graph the area before I left, and it looked like there was a big fish down there. I left anyways, and after running a bit down the lake, an intuition told me to turn around and go back. So, I made a U-turn and went back to that spot – it was mid-lake, about 18 feet and around stumps. On my first cast there I hooked into a 9-pounder.”

Castledine said that he caught the big 9-pounder on a 10-inch Strike King Rage Tail Anaconda.

“Twelve of the fish that I weighed in, including another 9-pounder that won me the Big Bass Award on Day Two came sight fishing with a Strike King Rage Bug,” Castledine said. “I also was catching fish on a swimjig and a Strike King 2.5 Squarebill, but the big one today came on the Anaconda.

“In these big multi-day events, you can’t win in one day – you have to survive,” Castledine went on to say. “I was hanging around – tenth place after Day One, and ninth place after Day Two – and just trying to keep myself in position to possibly win. I believe the intuition to turn around today was from the Good Lord above. I’m so happy that I listened to Him.”

The top 10 pros on Sam Rayburn Reservoir were:

Jason Bonds of Lufkin, Texas, caught a big largemouth weighing 10-pounds even Thursday – the biggest bass of the tournament in the Pro Division. For his catch, Bonds earned the day’s Boater Big Bass award of $300.

Mat Downey of Kountze, Texas, won the Co-angler Division and $28,350, including a Ranger Z175 with a 90-horsepower Evinrude outboard motor. Downey earned his win with a three-day total catch of 15 bass weighing 55 pounds, 4 ounces.

The top 10 co-anglers on Sam Rayburn Reservoir were:

Cade caught the biggest bass of the tournament in the Co-angler Division Friday, a largemouth weighing 8 pounds even that earned him the day’s Co-angler Big Bass award of $200.

The Costa FLW Series on Sam Rayburn Reservoir was hosted by the Jasper-Lake Sam Rayburn Area Chamber of Commerce and the Jasper County Development District. It was the first Southwestern Division tournament of 2017. The next Costa FLW Series tournament will be a Southeastern Division event, held March 2-4, on Lake Seminole in Bainbridge, Georgia. For a complete schedule, visit FLWFishing.com.