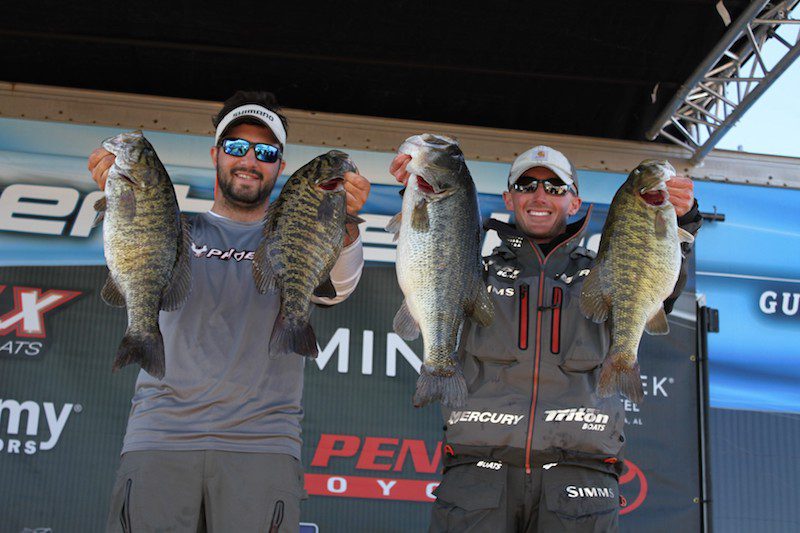 February 25, 2017 – Decatur, Ala – As the 2017 Alabama Bass Trail Northern Division season opener was approaching, the entire State of Alabama had been treated to warmer and milder conditions than the norm.  As Friday’s practice day wound down, and the registration meeting commenced, it became clear that those conditions were set to make an about face.

None of that mattered to Mitch Mitchell and Candler McCollum.

The pair made a long, backbreaking ride to the Guntersville Dam and battled the conditions in the tailrace for three hours, then navigated the treacherous conditions headed back downstream to bring their 30.59-pound limit to the scales to blow away a big field and take home the $10,000 first prize for winning an ABT event.

Their limit was a true spectacle, consisting of three smallmouth, one weighing 6.99 pounds, a solid four-pound spotted bass, and a 9.47-pound largemouth that took home the $5,000 big bass bonus.  The team’s total prize including ABT payout and Phoenix First Flight bonus prize totals $17,500 for a one day tournament.

The pair had to wait a long time to receive their credit and take home the money.  “We had our limit by 10:30, and left upriver at around 11:30 to try and take our time getting back because we knew we had a special bag,” they said.  “We pulled into Ingalls Harbor around 12:30 to 12:45 and waited until ABT staff got here so we could check-in; it’s still pretty amazing to think that this is how our day went.”

The anglers from Muscle Shoals, Ala. and Little Rock, Ark. reported catching a 15-pound limit early, then spending the next two hours culling all but one of their original limit.  “We caught 12 or 13 fish all day, and we caught all of them by making the same two casts,” they said.  “It was an underwater point upriver, and the smallmouth were out off the end of the point, and the spotted bass and the largemouth came off the backside of it; we caught them all on swimbaits.”

They reported throwing 5.5 to 7.5-inch Basstrix Paddletail and Strike King Shadalicious swimbaits on 3/4-ounce jigheads to get the job done.  They said they caught their early limit on shad colored versions, but turned to a chartreuse and blue model as the day wore on.  “We didn’t expect the day to go like this when the weather turned,” they reported. “We expected it to be tough, but we walk out of here with a personal best smallmouth and largemouth, our biggest win and our biggest payday too – this is truly unbelievable, and we are so happy to be standing here.”

While finishing more than 10 pounds behind the winners, Lanny Guthrie and Bobby Brown produced an impressive 20.11-pound limit to finish the day in second place and earn the $5,000 runners up prize.  The pair attempted to run the crankbait pattern that they had found in practice early, but had to adjust.  “Things just didn’t happen like we had planned early,” they said.  “But, we made the adjustment to go throw spinnerbaits on bluff walls and it really started to happen.”

They said they selected a 3/8-ounce double willowleaf War Eagle chartreuse spinnerbait with painted blades and drifted with the wind, slow rolling the spinnerbait.  “Lanny is the one that figured it out,” said Brown.  “Once he did, we both got on the front deck and made the most of it we could; we are really pleased with the way everything turned out.”

Third place finishers Jason Smith and Chaz McMahan weighed-in their 20.09-pound limit within the first 10 minutes of the afternoon, then got to watch the whole field weigh, but their limit was good enough to hang onto the $4,000 third place prize.  Rounding out the top five were David Kyle and Scott Callahan, who earned $3,000 with their 19.96-pound limit, followed in fifth by James Harrison and Larry Hill who earned $2,000 for their 19.51-pound performance, as well as the Wedowee Marine $1,000 bonus for being the highest finishing anglers who purchased their Phoenix Boat from sponsor Wedowee Marin. The top 10 standings are below, for complete standings go to http://www.alabamabasstrail.org/tournament-series/wl-results/