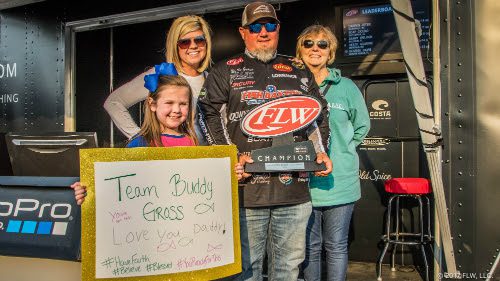 “I’m feeling really great right now,” said Gross, who also logged a top-10 finish at the Series Southeastern Division opener on Lake Okeechobee in January. “This is an awesome lake and I’ve had a great time on it this week. The Lord has really blessed me.”

Gross said he caught the majority of his bass in Spring Creek. He said his area revolved around a unique turn in the creek channel that acted as a highway for bass to travel to shallow spawning flats.

“Every fish I weighed in came off that 100-yard stretch,” said Gross. “It was like a pocket in the deep grass line that led straight to the spawning flats and there was timber in the middle of it. The grass down the sides was about 14- or 15-feet tall and it was green and healthy.”

Gross said he used two baits to catch his fish – a Tennessee Shad-colored Zoom Swimmer Paddle Tail Swimbait, and a white Zoom Magnum Super Fluke with a Tennessee River Tremor Head. He said he each lure was equally productive in catching a total of 17 keepers throughout the event.

“I’d throw the Swimmer up over the grass early on in the day, and then I’d take the fluke and slow roll it through the timber to catch suspended fish in the afternoon,” said Gross.

Though his bass made subtle moves throughout the week, Gross was still able to put together the weight he needed to win.

“On Thursday they were wadded up tight, and yesterday they were scattered,” said Gross. “They were in two different spots today, but close together. It was just one of those textbook kinds of areas that you dream about.”

The top 10 pros on Lake Seminole were:

Jeff Fitts of Keystone Heights, Florida, caught an 8-pound, 1-ounce bass Thursday – the biggest of the tournament in the Pro Division. For his catch, Fitts earned the day’s Boater Big Bass award of $300.

Dwayne Fricks of Starr, South Carolina, won the Co-angler Division and $28,600, including a Ranger Z175 with a 90-horsepower Evinrude outboard motor. Fricks earned his win with a three-day total catch of 14 bass weighing 33 pounds, 3 ounces.

The top 10 co-anglers on Lake Seminole were:

Beaver caught the biggest bass of the tournament in the Co-angler Division Friday, a fish weighing 7 pounds, 6 ounces that earned him the day’s Co-angler Big Bass award of $200.

The Costa FLW Series on Lake Seminole was hosted by the Bainbridge Convention & Visitors Bureau. It was the second Southeastern Division tournament of 2017. The next Costa FLW Series tournament will be the Central Division opener, held March 30 to April 1, on Lake Dardanelle in Russellville, Arkansas. For a complete schedule, visit FLWFishing.com.