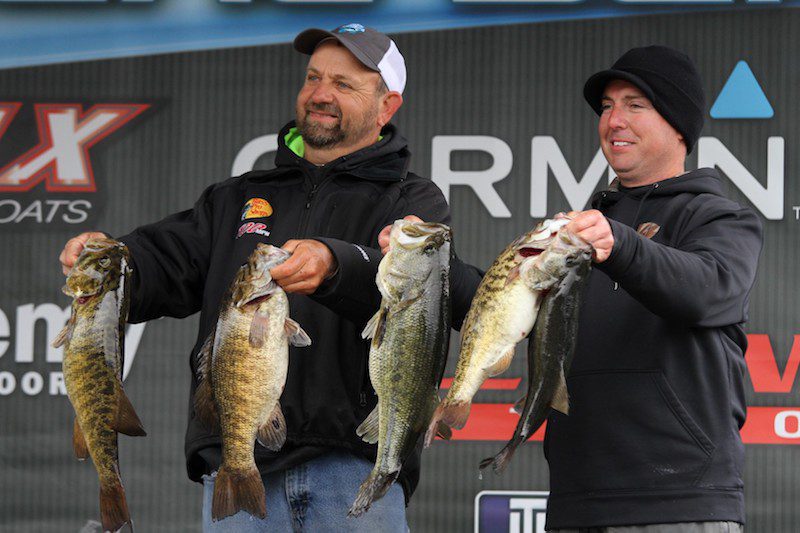 March 12, 2017 – Florence, Ala – It seems that every time there is a bass tournament, the weather is going to decide to make a change – at least, it happens so often, that it seem like it happens every time.

When the more than 200 anglers of the Alabama Bass Trail’s Northern Division arrived for practice in Florence, Ala. for the second stop of the 2017 schedule, they were able to wear shorts and flip flops.  By the time tournament day arrived, they were in cold weather gear, and likely wishing they could build a fire on the deck of their boats for warmth.

Despite a nearly 30-degree temperature drop in three days, the fishing on Pickwick Lake proved to be the one thing that was on fire. On a day that most would assume would result in tough fishing, the Tennessee River fishery would show its potential as a big bass factory with nearly everyone in the top 15 eclipsing the 20-pound mark, and it taking 15.79-pounds to get the final check in 40th place.

The chief fire starters amongst the group were the Tennessee team of David Surat and Nathan Brewer, who decided to battle the crowds of anglers who fought it out in the tailrace of the Wilson lake Dam.  Surat and Brewer used swimbaits on jigheads to produce a 25.89-pound limit to take home the title and the $10,000 winner’s purse.

The pair said that they were surprised to be standing where they were at the end of the day.  “We actually thought it would take 27 to 28 pounds to win today,” they reported.   “We also didn’t think our fish were that heavy, so we’re a little surprised to have won, but really happy that it worked out the way that it did.”

They reported fishing both the face of the dam and the lock in producing their limit.  “We had a few key little spots within the whole area and we just worked our way in there as best we could to make the casts we needed,” they said.  “There were times we just had to wait a little while for someone to move off, but we caught a lot of fish, and had a fun day.”

They reported throwing a variety of shad colored, 5-inch Zoom Swimmer Paddletail swimbaits on 1/2 to 3/4 –ounce swimbait jig and scrounger styled heads to produce their catch; which was made up of three smallmouth and two largemouth.  Their catch included a behemoth 7.14-pound smallmouth that anchored their creel.

In contrast to the onslaught of smallmouth laden tailrace pattern that dominated the standings, the team of Jake and Michael Gipson ran down lake seeking to avoid the crowds.  While the approach led to a grinding style of fishing, it produce a 25.54-pound limit of largemouth that was good enough to earn the $5,000 second place prize.  “We ran all the way to the Nachez Trace Bridge area and threw red crankbaits and lipless crankbaits to the small grass patches along the edge of the channel,” they reported.  “We only caught five keepers all day, and had one 15-inch smallmouth that we tried to cull, but just couldn’t make it happen.  Despite that, we had a great day and are happy with a second place finish.”

The team of Cody Nichols and Koby Newman produced 24.55 pounds to finish third and claim the $4,000 purse, followed by Nicholas Reeves and Blake Hall in 4th with 24.25 pounds, who earned $3,000 and rounding out the top five was Phillip and Bailey Dukes who produced 23.29 pounds, earning $2,000.

The big fish of the tournament, a 10.36-pound largemouth was caught by the team of Logan Johnson and Jeremy Christian.  The behemoth anchored their 22.52-pound limit, which was good for 10th place, and a total of $1,600 including the $500 Big Bass bonus.

The top 10 standings are below, for complete standings go to http://www.alabamabasstrail.org/tournament-series/pl-results/

For information about Alabama Bass Trail and for complete tournament standings visit www.alabamabasstrail.org. 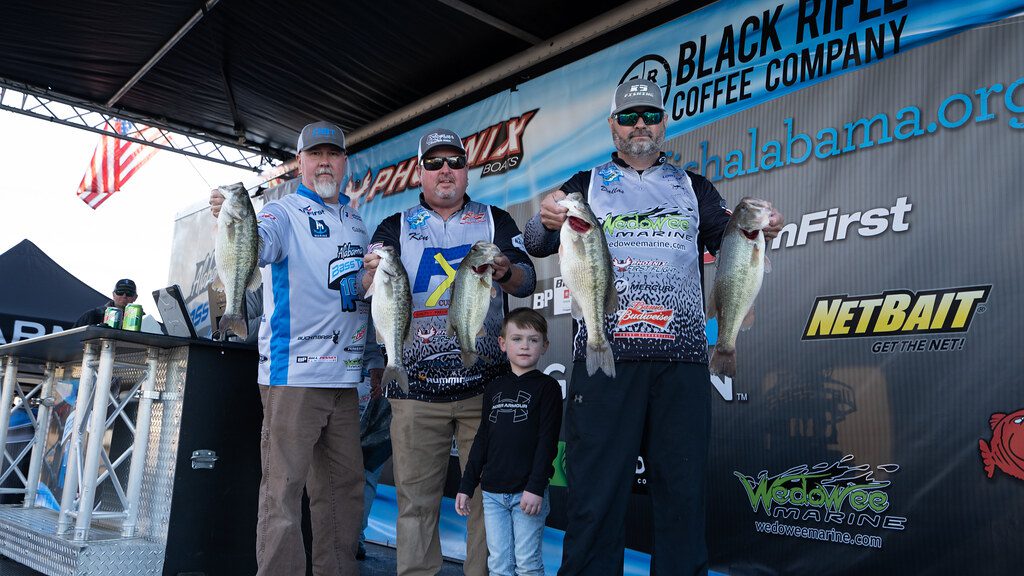 Ken Walters and Dallas Weldon take the win on Lake Jordan with 19.64 By Jason Duran 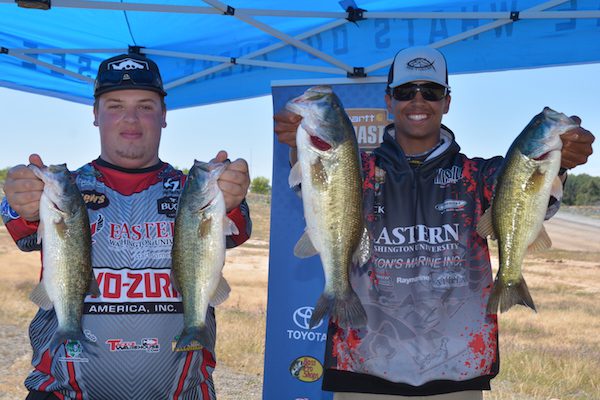