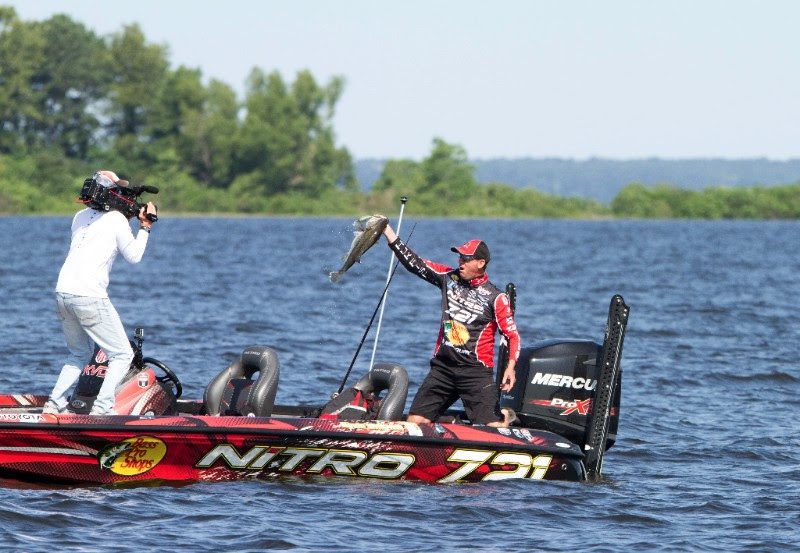 Live coverage of the 2017 GEICO Bassmaster Classic will keep fans updated with on-the-water video and reports throughout the day. Competition begins March 24, on Lake Conroe outside of Houston, Texas.
Photo by B.A.S.S.

BIRMINGHAM, Ala. — Fifty-two of the world’s best bass anglers will head to Houston next week to compete for more than $1 million in the 2017 GEICO Bassmaster Classic presented by DICK’S Sporting Goods, and fans will be able to follow the action as it happens.

Classic LIVE will be broadcasting in real time from the B.A.S.S. booth at the Classic Outdoors Expo presented by DICK’S Sporting Goods in the George R. Brown Convention Center.

“What an incredible venue we have this year being set up in the heart of Houston, Texas, and watching the action unfold live on a lake that some anglers are saying might produce multiple 10-pound-plus bass,” said Mike McKinnis, vice president of media content for JM Associates and producer of The Bassmasters TV show on ESPN2.

Cameras will be streaming live coverage of the Classic leaders on Lake Conroe back to the expo production facility, where hosts will break down the action for fans tuning in through Bassmaster.com and WatchESPN. Hosts Tommy Sanders, Mark Zona, and Davy Hite along with Dave Mercer and on-the-water reporter Robbie Floyd, will provide analysis and live updates.

This year, special guest Brian Robison of the Minnesota Vikings will also be onsite for the Classic LIVE show to provide some local insight. Robison played for the University of Texas and calls Lake Conroe his home lake.

Also, special guest RJ Mitte, who plays Walter White Jr. on the series “Breaking Bad,” will be joining the set at the expo.

Each day of competition will have six hours of coverage, 8 a.m. to 11 a.m. and 12:30 p.m. to 3:30 p.m. Eastern Time. Watch the tournament leaders catch bass in real time on the exclusive Classic LIVE program on Bassmaster.com and simulcast on ESPN3 and the WatchESPN app.

Facebook Live broadcasts will be added to the coverage this year, on the B.A.S.S. Facebook page, including coverage of takeoff on Day 1, the Toyota Mid-Day Report all three days around noon, and the press conference with the Top 6 anglers after each competition day.

Also on Bassmaster.com, fans can keep up with every fish caught through BASSTrakk, a real-time leaderboard that shows each angler’s catch according to estimates of marshals assigned to each competitor’s boat. In addition, on-the-water reporters provide a running commentary on the action in the Live Blog.

“Through those features, along with videos and photo galleries, we’ll have the lake covered from top to bottom,” said Jim Sexton, B.A.S.S. VP/Digital. “And we’ll cover every inch of the Minute Maid Park weigh-ins and the Bassmaster Classic Outdoors Expo, as well.”