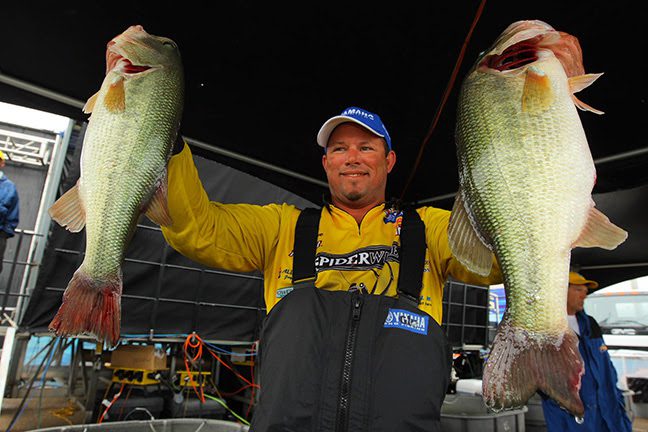 LIFE IN THE BASS LANE

For the Raymarine-sponsored Lane brothers, family and fishing go hand in hand

These accomplished Raymarine pros both hail from Central Florida; and while Chris has spent the past handful of years in Guntersville, Ala., Bobby kept his residence in Lakeland. Prior to launching full-time fishing careers, Bobby owned and operated a landscaping business and Chris worked outside sales in Central Florida’s phosphate mining industry. Both recall pivotal moments that put them on course to the livelihoods they now enjoy. 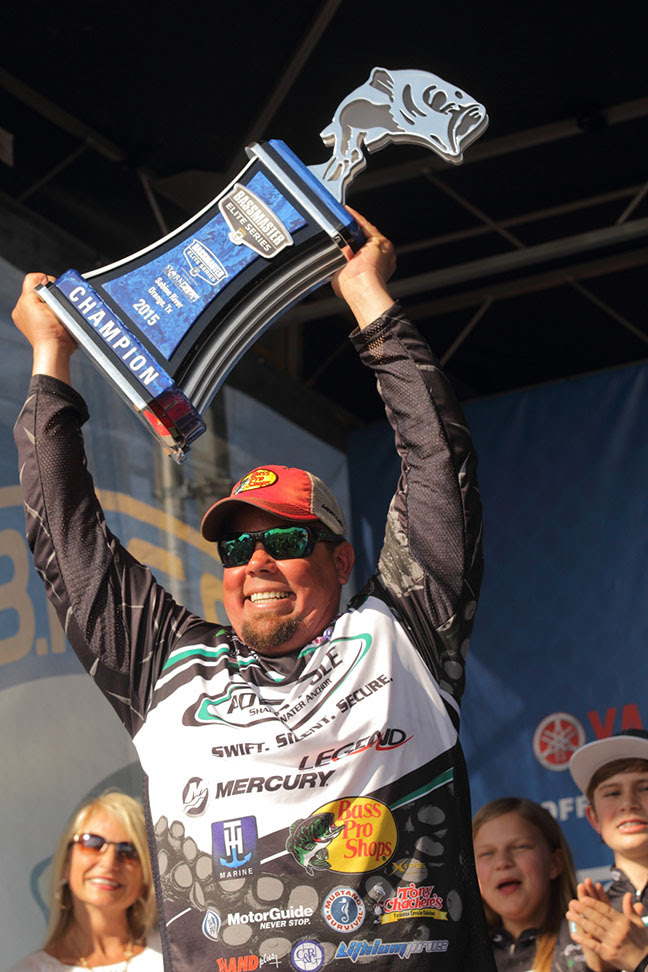 “Growing up in Central Florida with lakes all around us and bass fishing is what we did; but once we realized you can make money at it, that was pretty awesome because it had been a dream of ours for a long time,” Chris said.

For him, claiming his first win — a 2006 Bassmaster Southern Open on Lake Okeechobee — lit the fuse on what has become an explosive career.

“That was the event that made my career possible,” he recalls. “The financial help was a big part, but the confidence boost was enormous.”

Bobby recalls his epiphany: “When my brother qualified for the Bass Fishing League (BFL) Regional in 2001. I said ‘Well if he can do it, I can do it.” 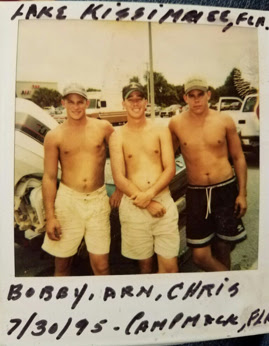 Fueled with this motivation, Bobby put his ambition to the test when he qualified to fish the BFL All-American on the Mobile Delta in May 2003. Finishing third earned him a $10,000 prize and stoked his fire in a big way.

“I said ‘I like the fishing more than I do the lawn business,’ so I fished the rest of that year and made some pretty good money at it,” Bobby recalls. “I decided to try and run the lawn company at the same time. I was actually losing money, so I decided to pursue my professional fishing career.

“It was that $10,000 check that I got on the Mobile Delta many years ago that allowed me to venture into the bass fishing world.”

Bobby and Chris’s older brother Arnie works full-time in sales for the family’s polyurethane/rubber lining business, which services the phosphate and amusement park industries. He fishes the Bassmaster Southern Opens and takes great pride in seeing his younger brothers excel at the sport’s highest level.

“I think it’s great when you follow whatever drives your heart,” he said. “If you want to become the best at what you do and follow your dream, if it works out, then that’s wonderful.

“With all of us growing up fishing together, we can all relate to that. Doing it professionally and making a living at it is a blessing. But we all still love to fish, even outside of tournaments, just for the peace and enjoyment of the outdoors. It’s in our blood.”

Noting that his “big brother” door is always open for advice, encouragement and, if need be, a firm opinion; Arnie said that camaraderie born of countless hours on the water intertwines three souls whose collective closeness defies the miles that sometimes separate them.

“Since we were five years old, our granddad took us fishing almost every weekend. It was inexpensive entertainment that provided a lot of family bonding time. It also provided a lot of food for us and, to this day, we still like to eat bass and other freshwater and saltwater fish.

“As we’ve gotten older, we’ve continued this tradition with our dad and granddad and that’s kept us all close. Even now in our 40s, hardly two days go by that we’re not talking about a tournament.” 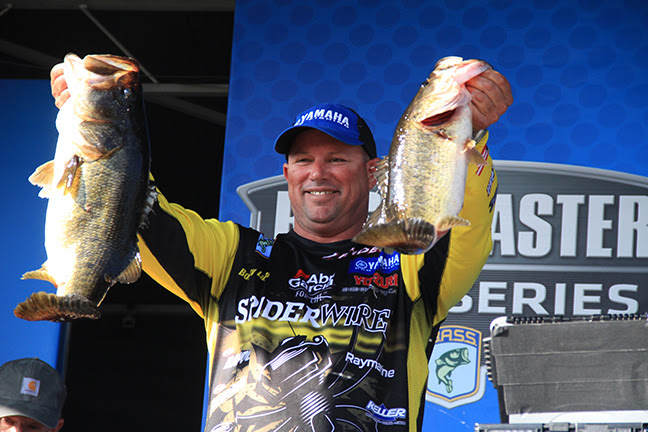 A quick look at the stats tell a tale of two individuals who clearly made the right decision to fish for a living. Bobby has amassed 30 top-10 Elite finishes, including a 2009 win on Kentucky Lake. He’s fished in nine Bassmaster Classics and came close in 2015 with a second-place finish on Lake Hartwell.

Bobby got his start in FLW competition with a strong track record in Costa FLW Series and Bass Fishing League tournaments. There, he earned 24 top-10s with two wins and one Forrest Wood Cup appearance. His combined career earnings are nearly $1.6 million.

Chris has built an impressive resume, with 27 Elite Series top-10s, six Classic appearances and seven victories (three on the Elites, three in the Bassmaster Opens and the 2012 Classic on the Red River). He also fished FLW events in his early years, where he compiled nine top-10s with one win on the Costa FLW Series. Chris’ career winnings total over $1.97 million.

Family members in the same competitive arena — that’s pure human interest mind candy. Do they get along? Do they cooperate? Well, such things take time. You gotta round off the edges, see the big picture and recognize who’s got your back.

Chris makes this point crystal clear: Notwithstanding their familial bond, both he and his brother want to beat everyone in the field at every event and that includes one another.

Bobby broke it down real for us.

“In the beginning, it was like: he’s not paying my bills, I’m not paying his bills; you go catch your fish, I’ll go catch my fish; we were true competitors,” Bobby said. “Moving forward now, having my brother on the Elite Series with me has actually strengthened our relationship — like we were when we were younger.

“It costs a lot of money to be a professional fisherman and when you first get into it without sponsors, which neither of had a lot of sponsors, it’s tough to survive. Now that we’ve gotten ourselves established in the sport, and we’re both a little bit better off, we have become true brothers; blood to the core. I know if I need anything to call him and he knows the same about me.”

Bobby said he and Chris try to keep one another tuned into each event’s key details of habitat and tactics. Two sets of eyes looking with mutual interest make it easier to dial in the game plan, especially given their similar fishing styles. 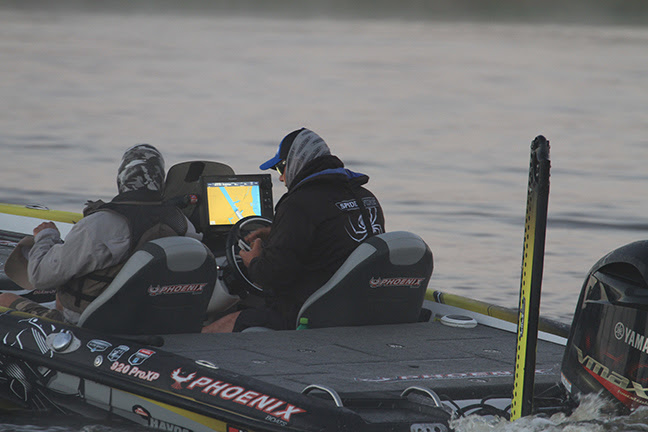 In addition to counting on one another, both Lanes have come to rely heavily on their Raymarine electronics. Noting that the old days of sticking a rod in the water to check his depth are long gone, Bobby said his Raymarine eS127 MFDs prove indispensable from shallow Florida lakes, to the glacial bodies of northern tournaments. Regardless of depth, he said, it’s all about understanding what’s below.

Clarity is key, for navigation and target identification. Case in point, at the first Elite event of 2017 on Tennessee’s Lake Cherokee, Bobby spent much of his time vertically dropping to specific fish that he identified on his screen.

“One thing that is very important to me is how clear my bait appears when I drop it past my trolling motor and I can see it just off the bottom,” he said. “I’ve played with other units before, but Raymarine definitely has the clearest, most sensitive screen I have ever seen.

“At Lake Cherokee, it was so obvious when a fish came up and looked at my bait and when there was nothing there at all. My Raymarine eS127 let me know exactly what was going on down there and keeping the bait on the graph at a times so I could see what it was doing was very easy.”

Sharing such observations has become something of a brotherly bonding element.

“It really helps having Chris and I on the Elite Series and Arnie (fishing regional events), because we help one another maximize our Raymarine units,” Bobby said. “I can say ‘Chris, look at this on your graph and try it. Here are 15 spots that look exactly the same.’ Or he can say, ‘Bob, get in this depth of water.’”

Admitting that he simply cannot compete without his Raymarine eS128, Chris makes an interesting observation about such reliance.

“It can play to your advantage, but if you don’t know how to operate your electronics, it can play to your disadvantage,” he said. “I know for sure that Raymarine has enabled me to be successful by making these units very simple for me to understand.”

A big fan of that crisp CHIRP clarity, Chris also appreciates the reliability of his unit’s precise mapping functions. This came in handy during his 2015 Elite Series win on the Sabine River. Navigating long stretches of often narrow waterways proved challenging, but with Raymarine guiding his course, he found his way in and out of the key areas.

“When you have to make a long run, that Raymarine mapping is key,” he said.

Another example of electronics impact came during Chris’ third-place effort at the 2015 Elite Series event on Lake St. Clair. Big smallmouth tend to congregate around particular types of bottom — in this case, grass clumps — and being able to identify these high-percentage spots kept him around the right fish.

Echoing these thoughts, Arnie said he’s particularly fond of the superior sonar and DownVision imagery he gets on his 9-inch aSeries touch screen units. His national travel may be less than his siblings, but competition takes him out of state throughout the year and dependable electronics has helped him expand past the familiar.

“Those are my eyes underwater,” he said. I feel like that can help me target the areas that I’m still learning, which are away from the shallow zone of five feet or less, that we grew up with in Florida.

“When I’m fishing offshore in those deeper lakes, the clarity of my Raymarine electronics helps me expand my understanding of these waters. We pretty much have the shallow stuff figured out, but the great image my Raymarine units give me has helped me get a handle on deeper fisheries.” 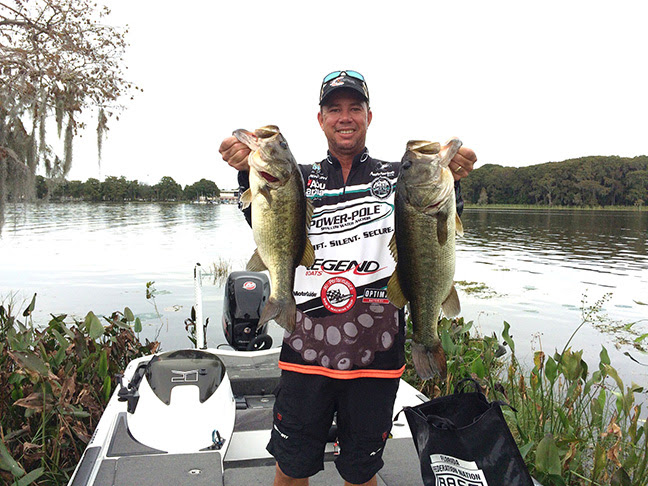 Given Raymarine’s strength in some of the world’s most challenging marine environments, it’s no wonder the Lanes trust these electronics for the inshore and coastal fun fishing they often enjoy between bass tournaments. Those same features they appreciate for tracking down freshwater bass also serve them during snook, redfish, trout and tarpon missions.

“When you go saltwater fishing, one thing you have to be aware of is the depth; especially where there are oyster bays or rocks,” Chris said. “If you run aground and the tide goes out, you’re done. Understanding the depth and the contour lines tells you when to go in and when to stay out”

The same can be said for the nation’s tidal bass fisheries. From the California Delta, to the Potomac River, daily ebb and flow not only positions fish and stimulates feeding; this rise and fall serves as the gate attendant for fertile backwaters.

Beyond this tidal truism, both brothers said they find the principles of depth changes, fish and bait location and structure identification bearing similar importance in their fresh and saltwater pursuits.

“Seeing the different bottoms lets you know the kind of area you’re in and what the fish are looking for,” Bobby said. “Once you find that, it’s so easy to duplicate with just the touch of a button.

“For example, fishing Boca Grande pass for tarpon, it’s to be able to see how deep the fish are. Now, you can watch your bait go right to those fish and keep it there until you get a bite. It’s basically just catching a giant bass. Either way, freshwater or saltwater, Raymarine is exactly what I need to be a better fisherman.”