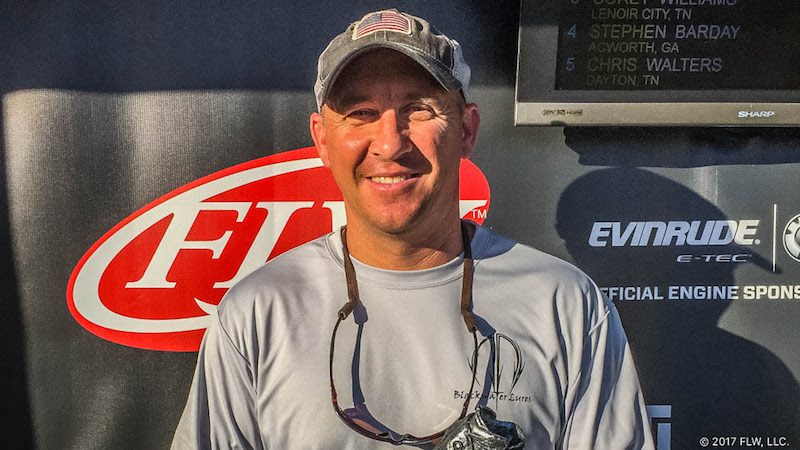 Parkinson said he started his day fishing a ditch toward the back of a mid-lake creek.

“The flat I was sitting on was 4-feet-deep, and the ditch reached down to about 6½ feet,” said Parkinson, who earned his first career-win in BFL competition. “The edges of the ditch had scattered milfoil, but its bottom was fairly clean. I caught my first keeper on a Rayburn Red-colored Booyah One Knocker.”

After a while, Parkinson said he followed bass along the ditch as they made their way to spawning beds.

“I targeted some lily pads with a black and blue-colored swimjig rigged with a Strike King Rage Craw,” said Parkinson. “I caught a 7-pound, 9-ouncer – my largest of the day – and a 4-pounder soon after.”

Parkinson said he returned to the ditch and put another 4-pound bass in the boat – all by 10:30 a.m.

“Around 1:45 p.m., I picked up a shad-colored vibrating jig and caught my last keeper, which was just shy of 3 pounds,” said Parkinson. “That one sealed that deal for me. I knew I had a decent limit of fish, but I thought someone may beat me with bass from the Guntersville bridges. Luckily my five held up.”

Martin caught a bass weighing 8 pounds, 3 ounces – the largest of the event – which earned him the day’s Boater Big Bass award of $620.

Paul Clayton of Cohutta, Georgia, weighed in five bass totaling 20 pounds, 6 ounces Saturday to win the Co-angler Division and the top prize of $2,393.

Britton caught the biggest bass of the tournament in the Co-angler Division, a fish weighing 8 pounds, 1 ounce. The catch earned him the day’s Co-angler Big Bass award of $310.