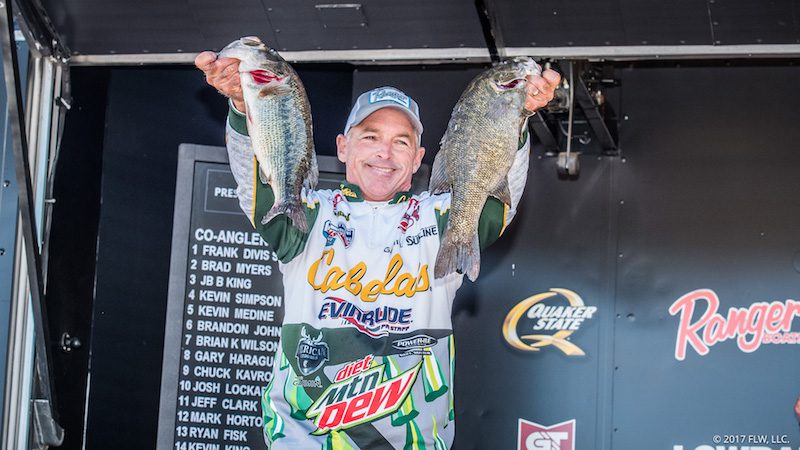 SOMERSET, Ky. (April 7, 2017) – Pro Clark Wendlandt of Leander, Texas, grabbed the lead Friday at the FLW Tour at Lake Cumberland presented by T-H Marine after bringing a five-bass limit weighing 16 pounds, 15 ounces to the scale. Wendlandt’s two-day cumulative catch of 10 bass totaling 35 pounds, 6 ounces, is enough to give him a thin 2-ounce advantage heading into day three of the four-day event that features 164 of the world’s premier bass anglers competing for a top cash award of up to $125,000.

Wendlandt said he spent his day targeting both smallmouth and largemouth bass in main-river creeks. He said he worked through the same area on day one, and bounced back and forth between the two species to craft his limit.

“I caught a lot of fish today, but they were smaller,” said Wendlandt, a 21-year Tour veteran and 3-time FLW Angler of the Year winner.  “Usually I get more largemouth the farther back I go, and more smallmouth toward the mouths of the creeks or the fronts. But today, it started mixing up. I caught my biggest largemouth of the day today from a place that looked good for smallmouth and vice versa. It’s pretty intriguing.

“I think sight-fishing may play a role toward the end of this tournament as well,” continued Wendlandt. “I know where about 20 largemouth are on beds, but I haven’t gone to any of them. It just hasn’t made sense for me to focus on them yet.”

Wendlandt said that Lake Cumberland’s expansive layout is working to his advantage.

“This lake is intriguing because it’s big and boats don’t dictate what you do, fish do,” said Wendlandt. “I saw other boats today, but they didn’t affect me. I wish every tournament was like this.”

For day three, Wendlandt said he may sift through some new locations but doesn’t have anything specific he needs to target.

“I don’t even know exactly where I’m going to start tomorrow,” said Wendlandt. “I’m just going to fish what feels good at the time. I’m going to run, and the first place that looks good I’m going to pull in and fish.”

The top 20 pros that made the Buck Knives Cut and will fish Saturday on Lake Cumberland are:

Todd Auten of Lake Wylie, South Carolina, earned the Big Bass award on the pro side Friday, weighing a 6-pound, 4-ounce fish to win the $500 prize.

Richie Eaves of Nauvoo, Illinois, earned $250 for the Big Bass award in the Co-angler Division Friday with a 6-pound, 2-ounce bass.

The total purse for the FLW Tour at Lake Cumberland presented by T-H Marine is more than $800,000, including $10,000 through 50th place in the Pro Division. The event is hosted by the Somerset Tourist and Convention Commission.

Prior to the weigh-ins Saturday and Sunday, fans are encouraged to experience the free Family Fishing Expo at General Burnside Island State Park from noon to 4 p.m. The Expo is a unique opportunity for fishing fans to meet their favorite anglers, enjoy interactive games, activities and giveaways provided by FLW sponsors, and learn more about the sport of fishing and other outdoor activities.

Youth are also invited to participate in the free FLW Foundation’s Unified Fishing Derby at the Ruckel’s Restaurant Pay Lake, located at 192 KY-70 in Eubank, Kentucky, on Saturday, April 8, from 9-11 a.m. The event, hosted by FLW Foundation pro Cody Kelley along with other FLW Tour anglers, is free and open to area youth 18 years of age and younger and Special Olympics athletes. Rods and reels are available for the first 50 participants to use, but youth are encouraged to bring their own if they own one.