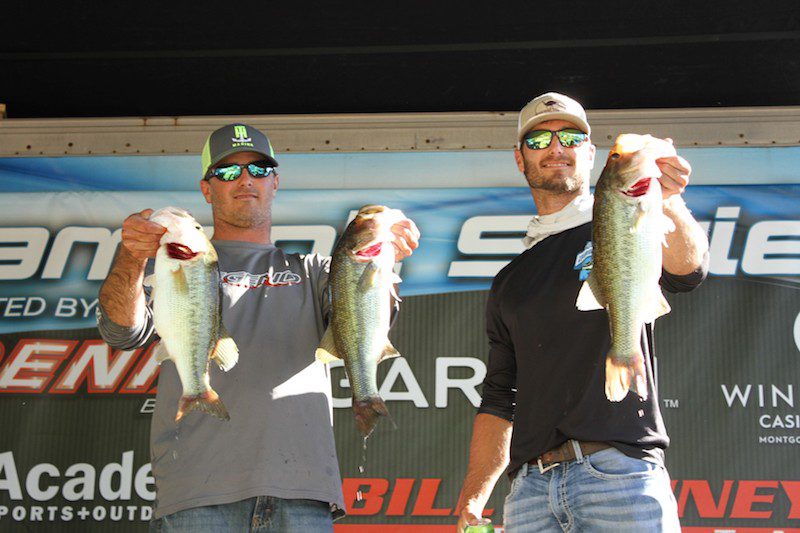 April 8, 2017 – Alexander City, Ala. – Lake Martin always presents an interesting challenge for a tournament angler.  While a limit of bass is always the objective, an average sized limit of spotted bass at Lake Martin will typically reward you with only the satisfaction that you weighed in a limit, and little else.

Being competitive at Lake Martin typically involves locating at least a couple largemouth bass that will be willing to go for a ride in a livewell.  An angler who finds all largemouth is ahead of the curve.  In the springtime, shallow, bedding largemouth tend to be the focus of every team’s desires.

When the Alabama Bass Trail Southern Division made its third stop on the 2017 schedule, the hope was to find an abundance of largemouth.  However, as can happen in bass fishing, a cold front rolled through the South, and once again, the conditions changed.

Despite those changes, the brother team of Chad and Chase Schroeder managed to locate a shallow flat loaded with spawning bass that allowed them to catch a 15.49-pound mixed bag limit that helped them take home a hard fought victory and the winner’s prize of $10,000.

“We found some spawning fish on a shallow flat in a creek on the south end of the lake yesterday, and we caught our fish there,” they said.  “We really didn’t catch a lot of fish, but the quality was good enough to get the win, and we’re thrilled with the outcome.”

The pair reported using a topwater approach, as well as pitching a jig to corral their limit.  “We caught two of our better fish early on a Zara Spook topwater, then turned to the jig,” they reported.  “We pitched black and blue and green pumpkin 3/8-ounce finesse flipping jigs and Baby Rage Craws to anything visible to fill out our limit; we didn’t expect the winning weight to be this low, but could’t be happier with the way today went.”

The team of Matt Green and Justin Nunley found spawning bass as well around Kowaliga.  While the winners were blind casting their area, the runner ups earned their $5,000 payday by fishing for visible spawners.  “We used a variety of lures to make them bite,” they said.  “We threw swimbaits, jigs, grubs, creature baits and anything else we could at them.  We thought we could do better based on what we found in practice, but we’re pleased with the finish.”

The team of Kyle Welcher and Chris Haynes finished third with 13.91 pounds; earning $4,000 for their day.  They were followed by Marty Giddens and Josh Stracner who earned $3,000 for their 13.87-pound limit, and Ronnie Faulkner and Michael Johnson rounded out the top five with 13.45 pounds, good enough for a $2,000 payday.

The big bass of the tournament was a 5.53-pound largemouth bass worth $500 to the team of Victor and Blake Harper of Tuscaloosa.

The top 10 standings are below, for complete standings go to http://www.alabamabasstrail.org/tournament-series/lm-results/

For information about Alabama Bass Trail and for complete tournament standings visit www.alabamabasstrail.org.