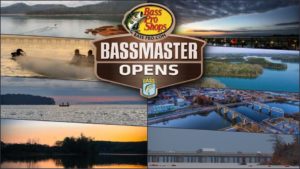 Competitive bass fishing, at its highest level, is booming in popularity. For validation of this statement, look no further than recently released viewership statistics for the 2021 Bassmaster Classic. Nearly 2-million anglers tuned in to watch, as Hank Cherry locked down his second consecutive Classic win, while duking it out against a myriad of today’s top anglers.

However, do not be fooled into thinking that this level of fanfare is somehow out of the norm. In fact, over 4.5-million viewers have taken in Elite Series coverage via FOX Sports, during the 2021 season. Additionally, more than 358.5 million minutes of Bassmaster Live and weigh-in coverage was streamed worldwide during the first seven events of this year’s Elite Series.

As a result of this increased viewership, FOX Sports has decided to expand upon their future coverage of B.A.S.S. sanctioned tournaments. This will include coverage of three additional Basspro.com Bassmaster Opens Series tournaments, as well as the Yamaha Bassmaster Redfish Cup Championship.

“Participation in fishing is at an all-time high and that’s reflected in the huge appetite we’re seeing for live fishing,” said Bruce Akin, B.A.S.S. CEO. “Our partnership with FOX Sports has allowed us to showcase the highest level of bass fishing in the Bassmaster Elite Series. Now we are thrilled to highlight the stars of the future with Opens coverage as well as exciting saltwater fishing!”

So what does this increase in coverage mean for anglers, as well as the sport of competitive bass fishing as a whole? In all likelihood, one will notice a significant increase in the free-spending of sponsorship dollars, from a number of sources. Since brand recognition and visibility are paramount to a successful sponsorship, this impending increase in airtime should net some additional support for top Elite Series pros.