SHREVEPORT-BOSSIER CITY, La. – Two years ago, Randall Tharp fished a nearly-flawless Forrest Wood Cup on Lake Ouachita but took second to Scott Martin and a big school of offshore bass. Tharp prepared for the 2013 Cup knowing that deep fish weren’t an option on the Red River. Everything was shallow and positioned around dense cover – right in the honey badger’s wheelhouse.

Coming in to the tournament, Tharp had located a handful of productive backwater areas in Pool 5. He was convinced that the bigger bites that came from the main river were random, whereas the backwater kickers, while extremely difficult, could be patterned. On day one, he learned several other pros had found those same areas and he was forced to regroup and reassess. By Sunday, he was fishing two spots – one a finger off the river located three miles north of Red River South Marina and 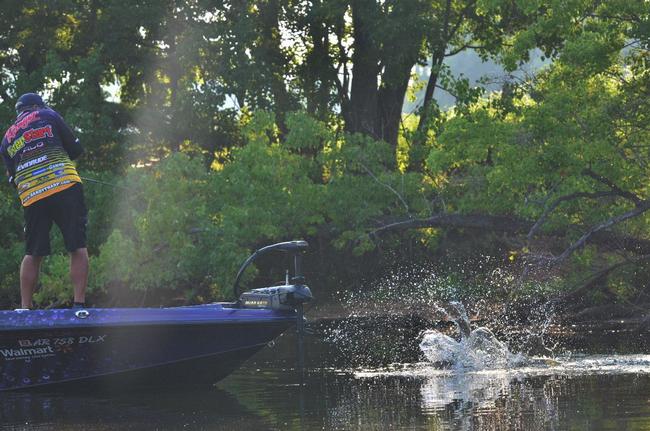 one a lily pad field adjacent to the marina.

Tharp started each of the last three days on the finger, one of the few areas lined with homes. He’d throw a bluegill-colored 3/8-ounce 4×4 Swim Jig with a Strike King Rage Craw Trailer (green pumpkin) on the side that featured a mud bank. Once the sun got up around 9 a.m., he’d bounce over and fish the longer riprap stretch with a Lucky Craft 1.5 squarebill crankbait (TO color).

After losing three quality fish on the swim jig yesterday, Tharp instinctively opted for a frog on the mud bank and that gut feeling proved correct as he caught one of his three big fish on his very first cast with a Spro Bronzeye Junior 60 (white with orange tails).

In the afternoon, he would return to the backwater area near the marina, which ironically was within walking distance of the campground where Tharp and his wife Sara stayed for the week. That backwater featured some of the thickest vegetation in the system and it’s the area that coughed up 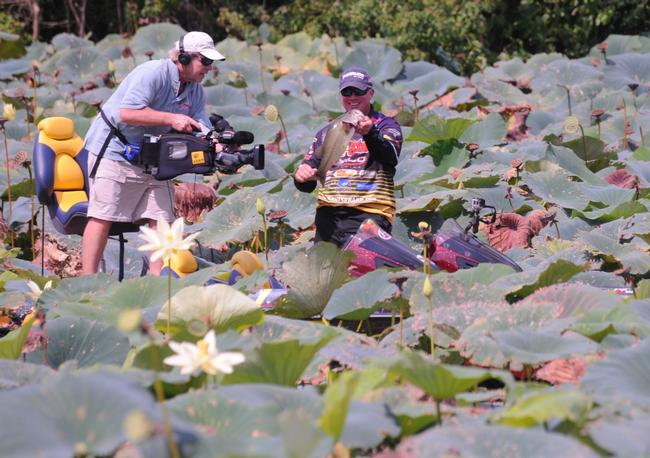 most of the 18-8 from day one. Today, it produced the other two kickers, these coming on a black and blue Bronzeye 65. Tharp would pick apart certain areas with his Power-Poles down, saturating stretches with repeated casts.

“On the last day of prepractice I caught 20 pounds in about 30 minutes in that area and knew I was on something special.”

Early in the week, Tharp was surprised at how few bites he was getting. Instead of the 40 or 50 he received in practice, he was now down to a dozen or so per day. In fact, he was fishless for the first three hours of the tournament. Today he caught only seven keepers, but they weighed 14 pounds even, more than enough to fend off a hard-charging Jacob Wheeler. Tharp’s total weight for the week was 53 pounds, 2 ounces. 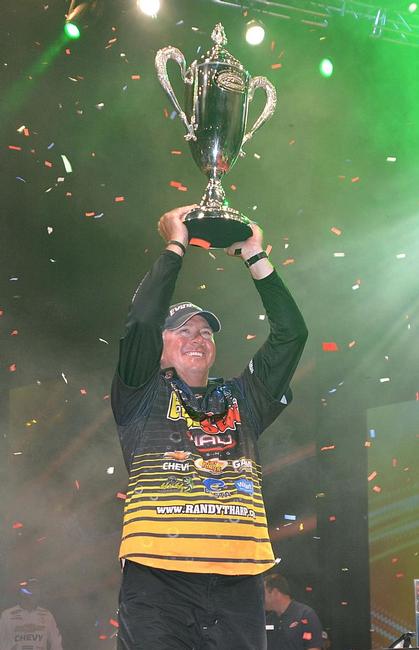 “The key this week was the swim jig, but today I wanted bigger hooks, bigger line and a bigger rod and that’s where the frog came in.”

Six years ago the EverStart pro was a contractor and a successful regional fisherman in north Alabama. Now with an FLW Tour win on Okeechobee and a Forrest Wood Cup title he’s regarded as one of the best shallow sticks on the planet. For winning the most lucrative tournament in bass fishing, Tharp earned $500,000. Fittingly, he couldn’t wait to have the Cup awarded to him and instead swiftly grabbed it himself after hearing his name called as champion.

“Last year when the schedule came out and I saw that the Cup was going back to the Red River and Shreveport, this was all I could think about; I knew that it was going to be my time. A lot of the lakes we go to don’t afford me the opportunity to win. But this is the way I like to fish. ”